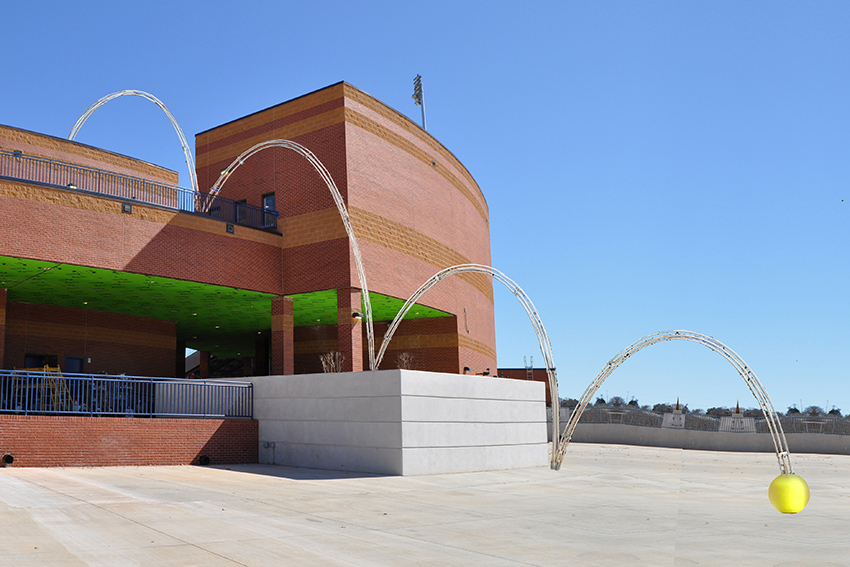 The USA Softball Hall of Fame Stadium will soon be home to a major art piece that will help showcase one of Oklahoma’s proudest destinations for many years to come. The City of Oklahoma City and a committee of USA softball stakeholders announced that world-renowned artist Pete Beeman has been commissioned for the project.

Beeman works primarily in large-scale sculpture that is interactive and moves. He has two studios based in Portland, Ore. and New York, N.Y. 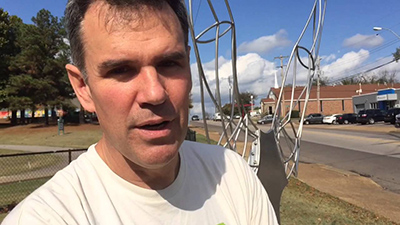 Artist Pete Beeman will build his vision of "Trajectory" at the USA Softball Hall of Fame complex.

VelocityOKC: How did you get interested in this project?

Pete Beeman: Oklahoma City is an interesting place. I was shortlisted on a project for the Children's Hospital years ago, and visited for that, visited Bricktown and the Oklahoma City National Memorial and Museum. I appreciate the city's focus on public art and efforts to revitalize rough-and-tumble downtown bits. So I’ve kept my eye out for projects.

How did you come up with the design?

When this came up, the appeal for me was more about the canvas, if you will --  a massive, unbusy building, massive open plaza, begging for a central focus, something to pop, to stand out, something to shout out the function of the building. So for me, the idea was pretty quickly formed in response to the site photos. Finding the appropriate idea, one that excites me enough to dive into, can be difficult, so having a clear vision right from the start makes a project feel like a good fit.

Talk about the “Trajectory” exhibit -- what you want people to know about it?

"Installation" would probably be a better description than "exhibit." My basic idea is to make visible the path of a ball flying out of the ballpark, bouncing off the roof, the balcony, the first-level planters and finally bouncing on the plaza, and ending as a ball on the plaza surface.

What makes this so unique?

To have a commanding presence and be visible from afar, it must be a giant ball. So I have proposed to build a three-foot diameter glass sphere as the ball, built in sections of three-inch-thick glass. The ball will appear sunk into the concrete of the plaza about five inches, as though it hit so hard in sank in. I will sandblast "cracks" in the concrete coming from it, to illustrate it was hit with enough force to crack and crater the surrounding concrete. The trajectory of the ball will be "drawn" in stainless steel tubes. A group of four tubes will trace the parabolic arc of a ball bouncing from point to point thru the air. These arcs will be 20 and 30 feet high, so they need to be made of multiple big enough tubes to support themselves through Oklahoma’s extreme weather conditions.

Where do you get the inspiration for this project?

The inspiration for this project itself is simple: What is at the root of a softball stadium? A batter smacking a softball right out of the park. So the way my mind works, I immediately translate that into a making the trajectory of the ball visible, you see it through its path, bouncing here, soaring there, and resting on the ground. Many of my projects work this way. I ask myself ‘what is at the core of the site, why are people coming here?’ I know that it is just a question of trying to represent that core visually in an interesting and unexpected way.

Why public art as a medium for your vision?

Public art often needs to be at the scale I like to work at, and has a budget that allows one to work at that scale, and has a destination for the finished piece. Without that, my house and yard would be buried under giant art things, and I would be in massive debt. Much of the art that has moved me over the years has been public art, done at a human scale, but at the large end of that scale. I am tall, 6-8. I don’t like messing around with tiny bolts. I would much rather drill a 3/8" hole in a fat plank of stainless steel than try to tap a tiny #4-40 thread into a little piece of aluminum. I am simply more comfortable building large things than small.