A highly visible, colorful and distinctive art piece to welcome guests and attendees to Oklahoma City’s Route 66 Park’s adaptive ballfield has been completed on the western shore of Lake Overholser. 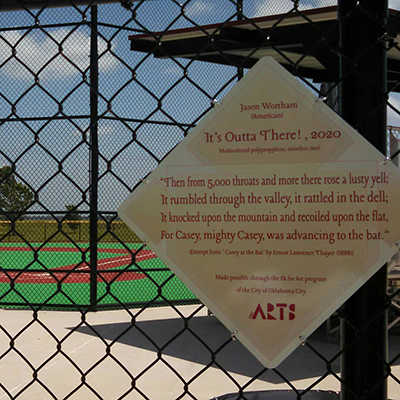 Artist Robert Wortham's "Its Outta here!" drew inspiration from the children’story "Casey at the Bat."

The adaptive baseball field is custom-designed, rubberized turf field to accommodate wheelchairs and other devices while minimizing injuries, eliminating the barriers posed by dirt infields and natural grass that can make it difficult for those with disabilities to utilize traditional fields.

Local artist Jason Wortham recently completed the design of colored plastic pixels clipped to the outer fence of the adaptive baseball park in Route 66 Park. The project titled “It’s Outta There!” was commissioned in coordination with the Office of Arts & Cultural Affairs and the city of Oklahoma City.

“I wanted to incorporate Route 66 into the design somehow, and it occurred to me that I could adapt the number '66' to simulate the red stitching present on an average baseball,” Wortham said. “The flames followed as a means to depict motion and energy while making the most of the available area for the work.”

The overall dimension of the design is six feet in height and extends 60 feet along a span of the entry gates and front fence. Wortham used the lengthy horizontal space to allow the flames to trail off gradually, in hopes of maximizing visual impact.

“My intent with 'It's Outta There!' is to create an image that would be striking-- something that might help capture the energy and excitement of a home run without manifesting as a distraction from the purpose of the park itself,” Wortham said.  “In essence, I was aiming for a design that would declare 'You've arrived! Come on in and let's play ball!'”

Wortham is known for two-dimensional sculptured pieces. He said he hopes to work with city officials for future projects.