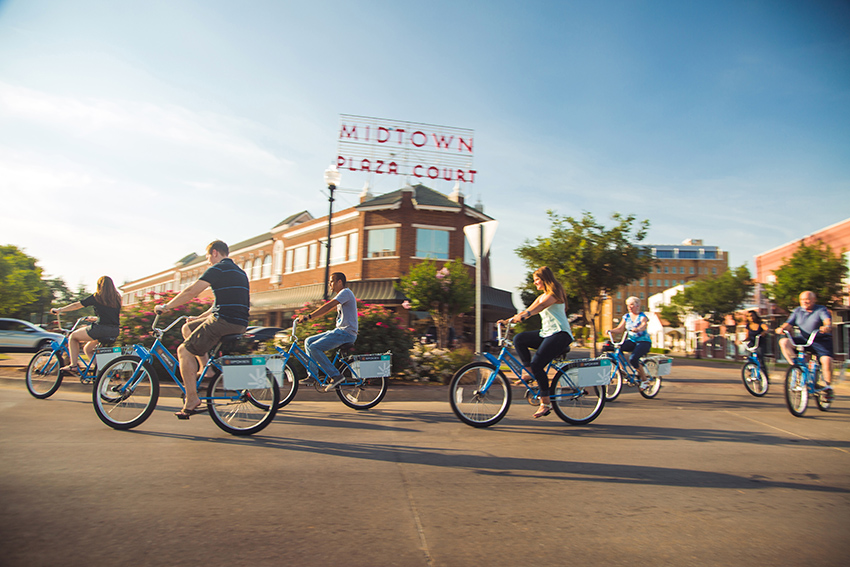 Spokies is currently the only bike-share program in the city and has been operating in downtown OKC since May 2012. It has changed management a couple of times through the years and is now under the purview of Embark transit services, which also manages the Oklahoma City streetcar and Oklahoma River Cruises.

Recently, Spokies added 25 new smart bikes to its fleet as part of its Dash program. Spokies Dash is the third generation of the bike-share initiative.

Spokies Dash is a new dockless bike system and includes 25 bicycles that may be picked up or dropped off in the downtown, Bricktown, Deep Deuce, Film Row, Uptown, Page Woodson, Paseo Arts District and Plaza District areas. Unlike Spokies’ existing fleet of bikes, the new bikes do not have to be checked out or returned to Spokies kiosk, giving riders more freedom and range.

“Adding dockless bikes to our bike share program is the next evolution in the industry,” said EMBARK director Jason Ferbrache in a press release. “Our existing Spokies program has been successful, averaging over 12,000 rides per year. The new bikes contribute to OKC’s micro-mobility and encourage visitors to explore more of our city center.”

The new Spokies Dash bicycles are smart bikes, meaning they include a touch screen on the handlebars where riders can get turn-by-turn directions, see how long they have spent on their ride and even learn how many calories they’ve burned.

Unlike the classic, second-generation bikes, the Dash bicycles are dockless and can be left at any bike rack within a service area encompassing an impressive slice of the urban core. The area now includes 16th Street Plaza District, The Paseo Arts District and University of Oklahoma Health Sciences Center. It is approximately 8 square miles.

Spokies DASH bikes can be located using the BCycle App. Riders may take the bikes anywhere in the approved areas and return them to bike rack. Preferred bike racks that work best can be found on the app. Riders who leave bikes outside the designated areas will incur a $40 fee. GPS devices on the handlebars offer turn-by-turn directions throughout the approved areas. The cost for the dockless bikes and Spokies existing bikes is $1 to unlock a bike, then 12 cents per minute for single-use riders or 10 cents per minute for monthly and annual BCycle members.

To end a ride on a Spokies Dash bike, the user only needs to use the provided lock to secure the bicycle to a rack within the service area.

Classic bikes have to be returned to a Spokies station, the front wheel securely docked. The dock will beep, and the rider will receive a text confirmation that the ride has ended.

Riders who leave bikes outside the service area will be charged a $40 fee.

The new dockless bikes will complement the eight existing Spokies stations. To better keep up with demand in high-use areas, two Spokies stations will be moved from their current locations at Elemental Coffee, at North Hudson and Northwest 8th Street, and the Oklahoma City Memorial Museum, at Northwest 4th and North Harvey Avenue, to the Intermodal Hub at Santa Fe Station, and the Riversport area, at SE 6th Street and Lincoln Blvd. 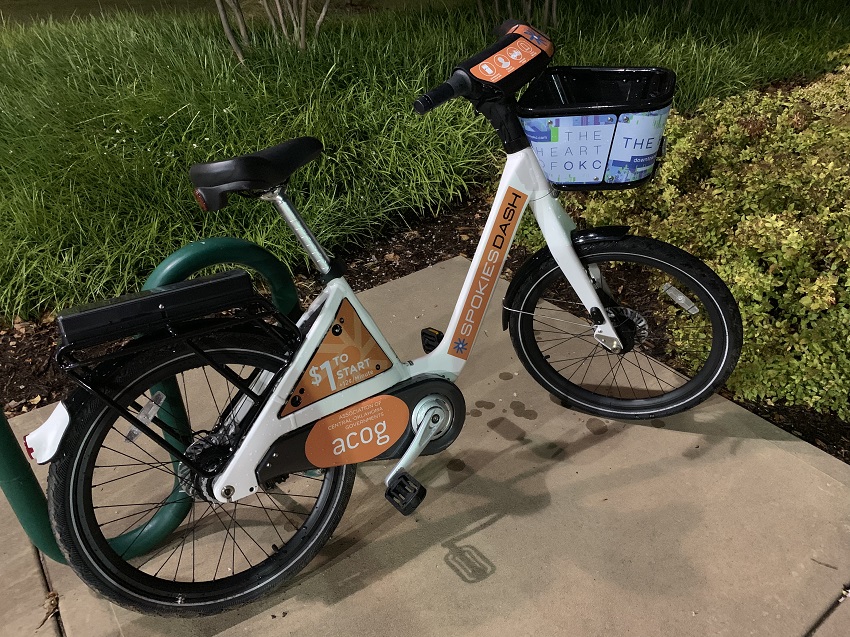 When Scissortail Park opens partially later this year, Spokies will likely move a station closer to the location and add Dash bikes.

“Oklahoma City has several opportunities this summer to try out the new bikes,” said Ferbrache. “Checking out a bike for a Full Moon Bike Ride, riding one before or after an Oklahoma City Dodgers game or using a new bike to get to or from one of The Plaza District’s monthly art shows are perfect opportunities to try the system.”

Riders must be 16 or older. Helmets are recommended but not required. For information on Spokies and to learn how to ride, visit spokiesokc.com.

The Bcycle App lets you locate and check out a bike. It also lets you know where you can end your ride and lock up the bike. (If you have an Annual Pass, it also lets you check out bikes in twenty-five other BConnected cities.)

Station-to-station trips on Classic bikes are great for rides to areas of the city where Spokies stations give you a convenient place to dock your bike.

DASH bikes go anywhere in the ridership area and can be locked to most bike racks. They are shown on the app.

Either way, be sure to download the app to locate a Classic bike at a station or DASH bike at a bike rack.

Consider a Monthly or Annual Pass.

Want to ride often and at the best price? Purchase a Monthly or Annual Pass and get the best rate. The first 15 minutes of your ride are included with the pass.

Just want to try it out? Use the single ride or Explorer’s Pass. Either way, you’re gonna love it.