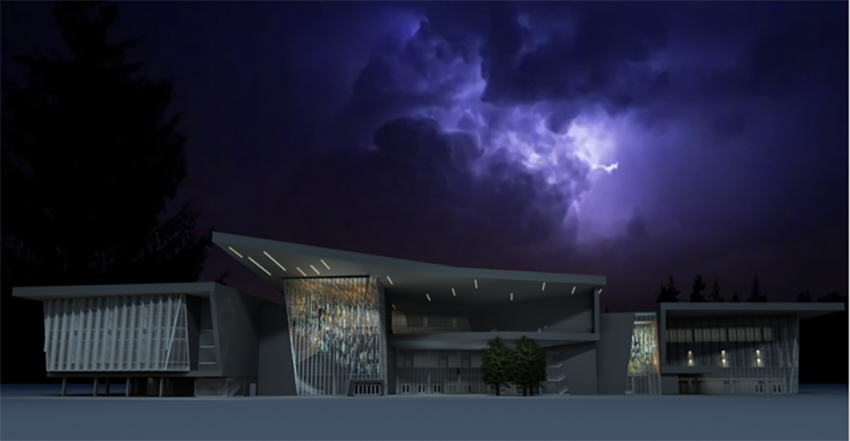 Narduli is a Los Angeles-based artist whose interdisciplinary studio is best known for technologically advancing technology that is rooted in a graceful and thoughtful aesthetic design. The Narduli Studio practices an idea-driven approach that interprets diversity of context and experience from a modern perspective.

In describing the foundational ideas of the sculpture Narduli said, “Since Oklahoman Wiley Post made history with the first solo flight around the world in 1933, Oklahoma has been on the cutting edge of aviation. As one of the seven global aerospace hubs, Oklahoma is home to more than 230 aerospace firms. Titanium, the fundamental material of aviation due to its strength and lightweight, was selected for this artwork as a reflection of Oklahoma City’s spirit and its aspirational vision.”

The sculptural installation spans both of the soaring atria at the front of the building facing Robinson Avenue and Scissortail Park. It consists of an array of anodized titanium rods suspended on aircraft cable alternating with strands of LED lights. Each light can be programmed for color, intensity, and duration, emitting light that is then reflected and enhanced by the titanium.

The result is a matrix that can display three-dimensional forms moving through space much like clouds. The default programming for the display will be based on a live feed of weather data from the City’s Open Data Portal thus creating a “virtual sky.”

That, however, is just the beginning.

Programs can be created through custom algorithms to display moving images relating to special events and holidays.

“The artwork is conceived as a synergy of fixed and fluid elements, a layering of form and light and of moments captured in real-time,” Narduli said. “The invisible layers of data become the means to activate the artwork through the powerful and yet ephemeral language of light.”

The original Call to Artists for the Convention Center artwork specified concepts that would create a monumental public art experience to capture the grandeur of Oklahomans’ spirit and resources, one that would be instantly memorable and visually compelling, and innovative in concept and construction.

The Selection Committee of citizens and professionals, the Arts Commission, and the City Council all agreed that that description was found in “Virtual Sky.”

The $1.5 million work commissioned for the MAPS 3 Convention Center will become one of several works in the City’s public art collection of over 200 works of art.