OK, Let’s Count! is the message that Oklahomans will hear repeatedly this spring as the state is pushing its residents to accurately complete the 2020 census form which should arrive in the mail this spring.

Oklahoma is hoping to reverse a costly trend that had a decade-lasting shortfall in federal revenues by under-counting nearly 30,000 residents 10 years ago. 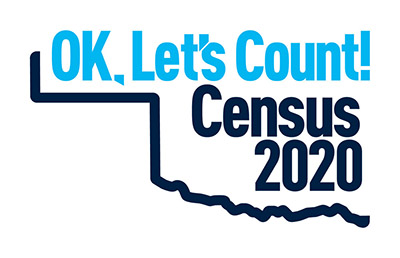 “In 2010, Oklahoma had the second-highest undercount in the nation, so Oklahoma was in 48th place,” said Drew Dugan, Chamber vice president of education. “Every person that is not counted will cost our community $1,675 per year. We simply cannot let that happen again.”

“We urge every employer to encourage their workforce to complete the census and make sure their entire household is counted,” Dugan said. “Completing the census is easy. I got my census code in the mail, got online and completed in less than 10 minutes.”

The Chamber urges businesses to consider including information about the census in correspondence with customers; provide a link to the census on your website; provide computers or tablets that can be used to complete the 2020 Census; or provide internet access to those who do not currently have access so that they can complete the census online.

“Participating in the census is vital to our city because federal funds, grants and support to states, counties and communities are based on population totals and demographic breakdowns,” said Roy Williams, Greater Oklahoma City Chamber president and CEO. “Oklahoma City benefits the most when the census counts everyone.”

Residents effectively use the census to support community initiatives involving legislation, quality-of-life and consumer advocacy. Businesses use Census Bureau data to decide where to build factories, offices and stores, and these create jobs. Local government officials use the census to ensure public safety and plan new schools and hospitals.

Residents who have yet to complete the census can do so online at www.2020census.gov. In addition, Oklahoma’s Regional Office is hiring Census Takers. The local field workers know their communities best and are instrumental in conducting surveys with residents on a variety of topics.

Applications can be completed online at http://www.2020census.gov/en/jobs.

Time remains for completion as only one-third of Oklahomans have finished the 2020 census report.

This article originally appeared in the April 2020 edition of The Point.