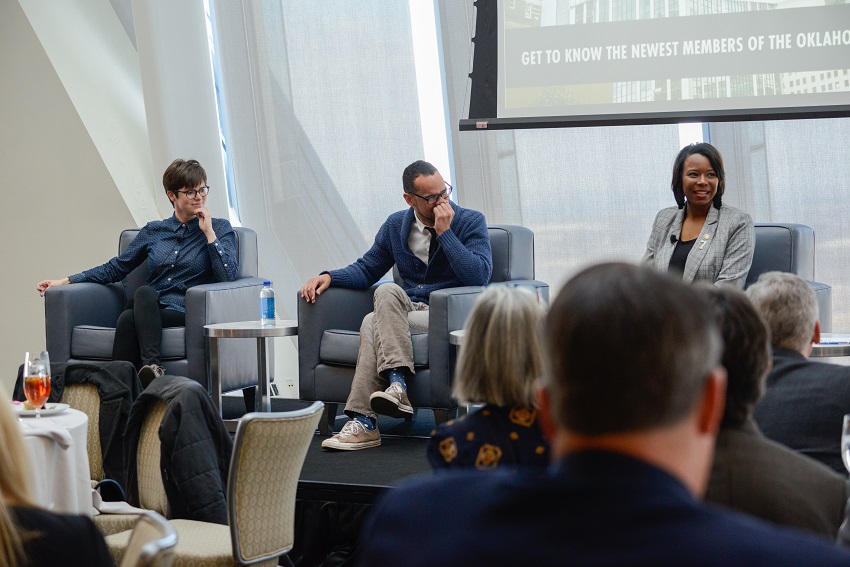 At a recent Chamber Forum event, more than 140 OKC business leaders heard from newly elected James Cooper, JoBeth Hammond and Nikki Nice. The three newest members of the Oklahoma City Council shared ideas on a variety of topics with the group, ranging from why they ran for office to what they most like about OKC to their vision for the city’s future.

JoBeth Hamon, 28, is the new councilwoman for Ward 6. She works for the Mental Health Association of Oklahoma and has a long volunteer history with service agencies, particularly helping the homeless and those in need.

Nikki Nice, 38, was elected in November to represent Ward 7. Both councilmembers Cooper and Nice are African American, making this the first time in Oklahoma City history to have two black council members at the same time.

The three took very different paths to City Council but they share a passion for the community that they call home.

“I was born and raised in Ward 7 and I grew up in Millwood Public Schools,” said Nice. “I graduated from Northeast High School and went on to further my education at Langston University. Being in the community, being civically minded and engaged, that started in high school with civics and that exposed me to some wonderful people that were doing some wonderful things. And that just got me thinking about what's happening in Oklahoma City and how I can be a part of that as a young person, how I can leave my mark as a young person, even for generations to come. So when the opportunity arose, because I had been involved and engaged in the community came the opportunity to say, okay I'm going to do this or I'm not. And obviously, when I decided to do this, seven other people decided too, but we made it to the finish line. I'm very grateful for that.”

Cooper is also from the local area, attending elementary and junior high school in Nicoma Park before graduating from Choctaw High School. A graduate of Oklahoma State, Cooper says he decided to stand for election because of sidewalks.

During his walks. Cooper noticed the transformation OKC was undergoing, with economic development projects and the building of the MAPS 3 streetcar.

“I don't know what the heck they're doing there at the State Capitol but I know here in the city we're doing something right, he said. “We're moving in the right direction and that's where I got the idea to run for City Council.”

“I'm maybe one of those people that our Renaissance has attracted to Oklahoma City,” said Hammond. “I didn't grow up here, I grew up in the Pacific Northwest and found my way back here through going to college at Oklahoma Baptist in Shawnee.”

Hammond works for the Mental Health Association of Oklahoma and has a long volunteer history with service agencies, particularly helping the homeless and those in need. When she moved into downtown, she regularly encountered on the streets those she was working to assist.

“I just saw this great disconnect between the Oklahoma City that I was really attracted to, and in kind of what I saw on a day-to-day basis,” she said. “I lobbied my elected officials and got varying results. I would go to people who had no education or sort of context about how important mental health services are and I would have to be educating them and it always felt like an uphill battle. So it just kind of occurred to me that, maybe if we had people who have the education already sitting in those seats we can maybe start at a different place and have a more balanced conversation around how we grow as a city. So, that was really what inspired me to run and so I threw my hat in the ring.”

When asked how to engage younger voters, the three echoed each other – with slight variations on the theme.

“Part of me was inspired to run by Commissioner Carrie Blumert,” Hammond said. “If anyone knows anything about Commissioner Blumert’s campaign was that she knocked tens of thousands of doors. Because knocking doors, talking to people where they are and talking about issues that matter are all things that I think would engage. I think making sure that we're speaking to the issues that matter and not shying away from the really hard parts of the conversations. Things like gentrification, like this systemic disinvestment in parts of our city. Just being honest about our history and about where we been to make sure that we're not repeating those mistakes is, I think, a way to catch people who before have just said well that's not for me because it's just the same old, same old.”

“We have to meet the young people where they are, so we have to be active as far as educating them on why it's important to vote in the first place,” said Nice. “Even in some of our African-American communities, we have to educate them on the Civil Rights Act, the Voting Rights Act, all of those things. And even women. We're celebrating a hundred years of women gaining the right to vote, so we have to educate, we have to again meet people where they are and let them know why it's important to be engaged.”