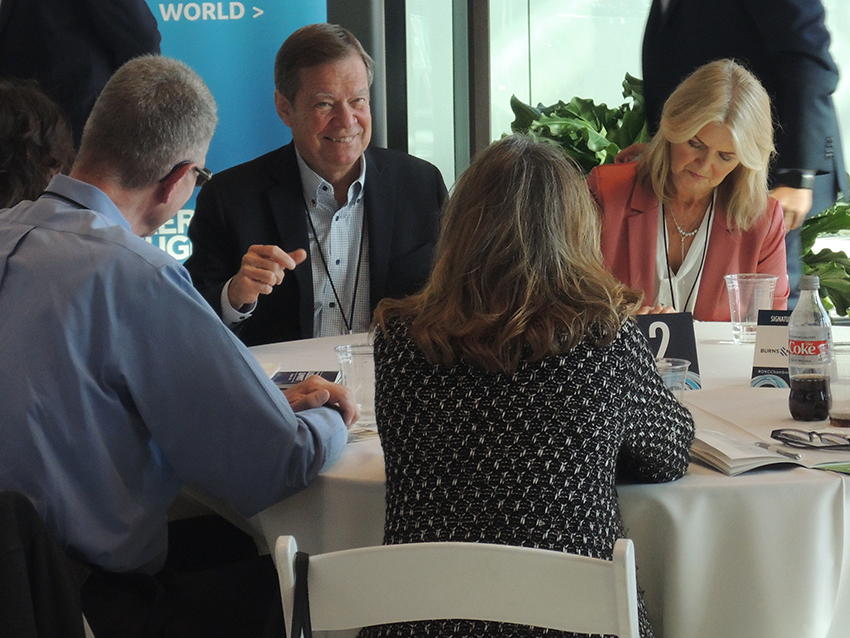 More than 180 Oklahoma City civic and business leaders gathered on Thursday, Oct. 11, to discuss the community’s future at the Chamber’s 2018 Leadership Summit. Attendees visited some of Oklahoma City’s major economic drivers and discussed issues like criminal justice reform and the development of the Oklahoma City Innovation District.

“The Chamber’s ability to impact the community is directly shaped by participation,” said Percy Kirk, chair-elect of the Greater Oklahoma City Chamber, at the event. “Having leaders like you engaging in the city makes a difference for us.”

The group started their day at BOK Park Plaza, the newest addition to Oklahoma City’s skyline. The building also offers the perfect view of more than $2 billion in capital investments that will take place in the area by 2020.

“There are very few cities in the United States, if any, that can boast that much development simultaneously,” Kirk said. “The next year and a half will forever shape our community.”

Oklahoma City’s Mike Monroney Aeronautical Center (MMAC) has been an important part of the U.S. Department of Transportation and the Federal Aviation Administration (FAA) since its opening in 1946. The center provides integrated, cost-effective, enterprise-wide support services for our nation’s air transportation system. MMAC is one of two centers that support all five aspects of FAA oversight: airports, the Air Traffic Organization, aviation safety, commercial space transportation and security/hazardous materials safety.

MMAC provides a concentrated space for pilots, educators and trainees from all over the world to gather and advance aviation research and build upon the foundations of the FAA. Its body of work includes providing supply chain management and support services to the FAA, conducting aerospace medical research and training and providing safety approvals for high-fidelity spaceflight operations and processes.

Today, the MMAC is the fourth-largest single-site employer in the state, with 3,600 civilian employees, 1,500 contractors and 1,200 students on site. The center has an annual economic impact of $1.65 billion.

With a history spanning more than 75 years, Tinker Air Force Base has always been at the heart of Oklahoma City's aviation and aerospace industry. With more than 5,500 acres, 400 buildings and 51 different organizations represented, Tinker is the largest single-site employer in the state and contributes an economic impact of $4.5 billion annually.

More than 30,000 military members and civilians enter the base's gates daily to work toward Tinker's mission to produce and maintain combat-ready air power. Key to that mission is Tinker's status as Air Force Sustainment Center (AFSC), one of five specialized centers assigned to the Air Force Materiel Command.

"The AFSC plays a vital role in moving the Air Force to higher levels of readiness," said Kevin D. Stamey, executive director of the AFSC. "Our national security is at risk if Tinker Air Force Base fails."

Tinker performs programmed depot maintenance on aircraft like the Boeing KC-135 Stratotanker, the military's current refueling aircraft. The KC-135 aircraft were built between 1957 and 1965, and the U.S. military plans for them to fly until 2045. Every five years, the KC-135 will come to Tinker AFB for a complete overhaul.

The base couldn't work on 60-year-old aircraft without ingenuity and the help of modern technology. Many original parts cannot be manufactured anymore, which is where the base's Reverse Engineering and Critical Tooling (REACT) office is able to help. Since 2014, REACT has used 3D scanning, measuring and engineering analysis to help manufacturing divisions solve problems and to quickly and cheaply create parts that would be impossible to get otherwise.

Attendees heard from multiple people on the tour that the biggest way to support Tinker Air Force Base was through increasing the workforce pipeline of educated employees.

Attendees were also able to hear from Oklahoma City leaders on two topics of importance to the future of the region: the ongoing development of the Innovation District and the progress made on criminal justice reform.

Katy Evans Boren, president and CEO of the Oklahoma City Innovation District,  reflected on her first 100 days in her role of leading the newly rebranded district. While her work will primarily impact the area within the boundaries of the Innovation District (roughly between NE 13-16th Streets to the north, NE 4th to the south and Robinson and Lottie Avenues to the west and east), Boren said that the lessons learned can be applied more broadly.

According to Cathy O'Connor, president and CEO of The Foundation for Economic Development of Oklahoma City, the Perkins+Will land-use study of the district will help guide the physical development of the area, making the district more accessible and focusing on building connectivity.

"A lot of the work Perkins+Will is doing is around inclusion and how we include the neighborhood in the work and development that is happening," O'Connor said, adding that only 4 percent of the jobs in the district are held by people who live in the surrounding neighborhood.

Tim Tardibono, executive director of the Oklahoma County Criminal Justice Advisory Council, also discussed the ongoing efforts by the Chamber and others to create a smarter, safer criminal justice system in Oklahoma County. In 1991, a new jail was built to ease overcrowding, but the new facility did nothing to examine why people were being incarcerated in the first place. Before reform efforts began in late 2015, the 1,200-capacity jail regularly housed more than 2,500 people a day.

"The reality is that the majority of people are in the jail for a substance abuse or mental health-related crime," Tardibono said. "We are essentially saying we will lock someone up for a disease they have."

Tardibono also commented that Oklahoma County cannot build its way out of the problem. One-third of Oklahomans suffer from addiction or mental illness.

"That awareness is growing in our city, and it is helping to drive us to a solution that is not building a bigger facility," Tardibono said.