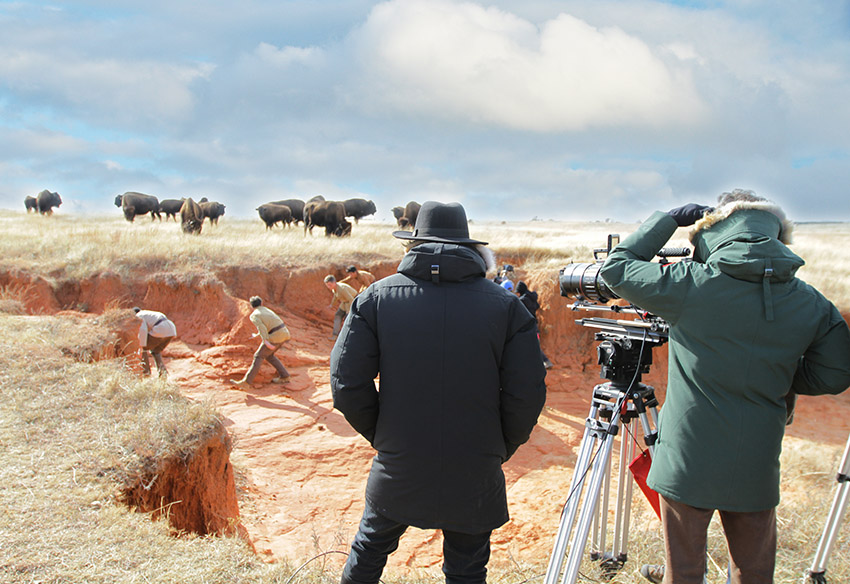 On January 13, 2020, the Oklahoma City Public Schools (OKCPS) Board of Education voted to sell the former Green Pastures Elementary School to Green Pastures Studio LLC (GPS). The school will be converted into a film and television academy and film studio to meet the growing needs and economic development of the Oklahoma entertainment industry.

Green Pastures Elementary, located at 4300 N. Post Road, was permanently closed in May 2019 after OKCPS went through the Pathway to Greatness project -- a districtwide initiative to provide equitable learning opportunities for all students through resource alignment.

Green Pastures Studio LLC (www.GreenPasturesStudio.com) will now be the operating entity, employing the core studio staff who will develop the facility to attract the best possible productions to base themselves on the campus and to film in and around the studio. Oklahoma film companies and vendors have long talked about the desire to be located on a film lot where different organizations can easily work together and a central hub of creativity can be presented to outside producers and film financiers.

The Oklahoma Film & Television Academy (OFTA) (www.OklahomaFilmAndTVAcademy.com) is a newly formed organization with a mission to develop a production ready workforce for the Oklahoma film and television industry, and will occupy this facility. OFTA is currently pursuing nonprofit status and plan to begin offering classes in February 2020. Specialty courses will include set construction and scenic painting, lighting and electric, grip and rigging, post production and more, while also offering on-set experience to students. Classes have been developed to meet the current needs of the industry and will provide post-high school and adult education and training to Oklahoman’s seeking to learn and work in the TV and film industry.

The initiative to establish a film studio and academy comes after Governor Kevin Stitt signed new legislation on May 7, 2019, to attract film and television productions to the State of Oklahoma. The bill offers film and television productions a 35% to 37% cash rebate on qualifying labor, goods and services, with a fiscal year cap of $8 million. The bill is also set to help recruit and retain Oklahoma jobs and serve as an immediate and long-term economic investment in the state. It is expected that Green Pastures Studio and the OFTA will also impact employment, tourism and businesses in the area.

Lieutenant Governor Matt Pinnell said, “This summer, Tava Sofsky and I traveled with Richard Janes and Melodie Garneau to Los Angeles where we met with heads of production and government relations personnel at various studios and TV networks. It is clear that Oklahoma has the opportunity to attract hundreds of millions of dollars worth of investment but in order to do so we need both sound stages and a 'set ready' workforce. Having visited Green Pastures school with Richard and Melodie, I share their excitement for the repurposing of the school and its ability to have a significant impact not only on the local community, but on the State as a whole.”

“I have been working with Melodie Garneau, Amy Janes, and Richard Janes for over a year and they have become pivotal players in the growth of our industry,” said Tava Sofsky, the Director of Oklahoma Film + Music. “Each of them have connections that run deep and have been instrumental to introducing Los Angeles based producers to the virtues of filming and investing in Oklahoma. They work tirelessly to support our industry and state and I fully support their effort to turn Green Pastures into an education facility and film studio.”

Oklahoma House Representative Jason Dunnington said, “As a member of the Oklahoma House of Representatives, I have been a supporter of growing the film and television industry in Oklahoma. In 2019, it was invigorating to see so many leaders prioritizing the arts while simultaneously seeking to diversify the state’s economy. It is our hope that SB200 was merely the first step in sending a strong signal to anyone wanting to bring business to Oklahoma. The second step, which I am excited to see coming to fruition, is the creation of the Oklahoma Film & Television Academy where we can train a production ready workforce to serve a growing demand. I fully support this work to turn Green Pastures School into a studio campus capable of training tomorrow’s workforce. If we work together and focus on opportunities to build in a 21st century economy, many will look back on this time as a turning point in our great state.”

In keeping the spirit of the building’s origin, GPS and OFTA will partner with education institutions to offer OKCPS students, and students statewide, the opportunity to learn hard and soft skills pertinent to the entertainment industry through studio visits and workshops.

“OKCPS is proud to be a partner as Oklahoma positions itself to meet the growing demand within the entertainment industry,” said OKCPS Superintendent Dr. Sean McDaniel. “When we launched our Pathway To Greatness work, we were committed to finding a positive community purpose for all of the buildings which were slated to close. We hoped to bring new options for student enrichment and support, community health and social services,and development to buildings that were no longer needed as schools -- and that is exactly what happened at Green Pastures. The employment, training, and economic development this new initiative will bring to our students, to the Spencer community and to our entire state is sure to positively impact many generations to come.”

Spencer’s Mayor, Frank Calvin, is also very excited about the possibilities that the new programs will bring. “This facility will provide much needed local employment and training opportunities for our residents, while creating economic growth opportunities for our local businesses and those in surrounding areas,” said Mayor Calvin. “The Spencer community is honored to welcome our new neighbors, and we look forward to being part of this exciting new chapter in Oklahoma’s history.”

For more information on this new initiative, please visit: