Get to know Mayor David Holt 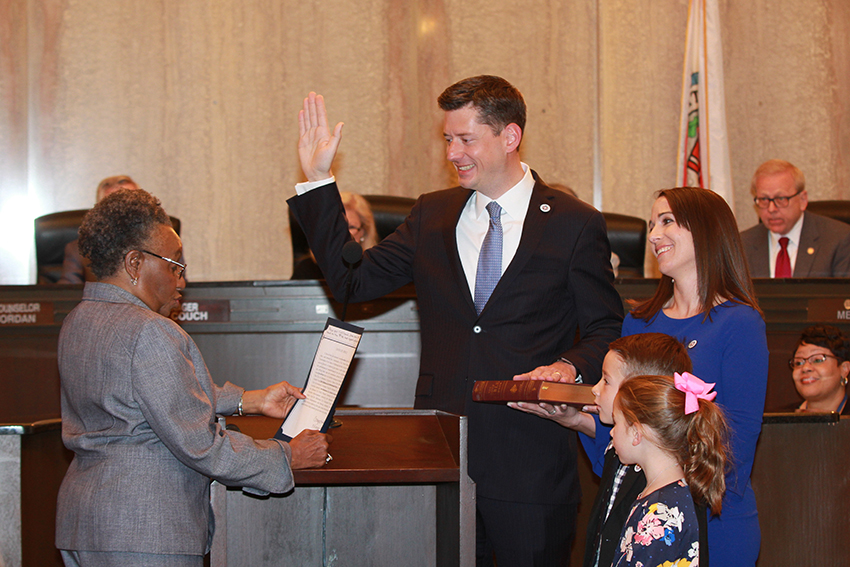 On Tuesday, April 10, David Holt was sworn in as the 36th mayor of Oklahoma City. Mayor Holt, a native of Oklahoma City, brings with him years of experience in state, local and federal government. Holt was elected to the Oklahoma State Senate in 2010, where he represented parts of Oklahoma City. Prior to that, he served as chief of staff to Mayor Mick Cornett for five years. Holt is also the author of “Big League City: Oklahoma City’s Rise to the NBA.”

Members of the VeloCity editorial team recently interviewed Mayor-elect Holt on his goals as mayor of Oklahoma City. Read the Q&A below to learn more about his priorities and how he plans to implement them, beginning when he is sworn into office on April 10.

VeloCity: What inspired you to run for Oklahoma City mayor?

Mayor Holt: On a civic level, I wanted to see our city’s momentum continue. I love Oklahoma City. This is my hometown and where our family has chosen to build our lives together. I felt as if I uniquely understood how to continue that momentum and make sure it reaches every part of our city. And on a more personal level, I’ve served at every level of government, but I felt the most fulfilled when I was at City Hall. This is where you can make a difference.

What have you learned from your time as an elected official in the Oklahoma State Senate, and how will that impact the way you will lead Oklahoma City?

A lot of times, it’s been what not to do. The current Legislature doesn’t understand the importance of investing in our future, it spends too much time on trivial issues, and it doesn’t know how to compromise. In Oklahoma City, we have been willing to do what it takes to build a city where people want to live and work. We have focused on things that matter. And we have worked together to compromise, which is the only way a diverse city of 650,000 people can move forward. On a more personal level, I would say my eight years in the Senate have been valuable in learning how to navigate the many challenges presented in any political process. Experience is, as they say, everything. I authored more than70 pieces of legislation that became law. Every one of those bills—and the ones I failed to advance, too—provided experiences I’ll draw upon moving forward.

Oklahoma City has a lot of positive momentum after three decades of successful public investments that in turn spurred even more private investment, jobs and development. As mayor, how do you plan to continue that momentum?

First, we want to make sure we take care of the basics—police, fire, streets, infrastructure. The good news is the voters approved major investments in those areas last September, and I’ll work to ensure those promises are kept. Second, we need to have an inclusive conversation about continuing the quality of life investments that have given us this positive momentum. Specifically, we’ll need to start talking soon as a community about whether to pursue a MAPS 4 and what challenges it might address. Third, to continue our momentum, we have to focus on education. And finally, we have to better incorporate the diversity of our city into decision making. To me, these are the foundational elements that allow us to continue this momentum and to extend it to every part of the city.

Humans can’t live without food and water and cities can’t live without jobs. It’s that fundamental. When I talk about momentum or the foundational elements to our city’s success, I’m really talking about all the things that create an ecosystem for economic growth. That’s the ultimate goal. So, I think all the things I mentioned previously play into our economic development potential. I would add there are also some more direct ways we influence that equation. There are entities like the Chamber of Commerce or the Alliance for Economic Development that take these assets we have cultivated and sell them to job creators around the world. That work is important and must continue. I also believe we can probably do more to create a local ecosystem for entrepreneurs, especially in the tech and bio industries. Encouraging the Innovation District’s growth could help to address that.

How do you plan to support public education in Oklahoma City?

Public education is the greatest challenge facing our city. And it’s personal to me as well - my kids are students in Oklahoma City Public Schools. Cities and school districts are separate entities in Oklahoma, but a mayor must do everything he can to address our city’s greatest challenges. A mayor can convene the interested parties in our city and develop a consensus around a strategic vision for education. We had MAPS for Kids, but that was 17 years ago. It’s time to develop a new vision and rally our city around its implementation.

One of your top priorities is incorporating diversity into decision making. How do you plan to bridge divides and make Oklahoma City leadership more diverse?

The first step is to use the platform of the position to force us all out of our bubbles a little bit. Spending a year running for mayor has a way of exposing you to people and places you wouldn’t have otherwise experienced. I need to be engaged in all the communities within our city, and I need to share those experiences with everyone else. A mayor also has direct appointment authority over hundreds of volunteer positions. Over time, I will make sure those appointments reflect our population. And finally, the mayor has a big say in who is in the room when decisions are made. I will make sure those rooms reflect the diversity of our city. There are communities that have not felt a part of our decision-making and our momentum, and for our city to succeed in the long-term, that has to change.

Business leaders have played an extremely critical role in getting us to this point over the last 25 years. Without Oklahoma City’s business leaders, we wouldn’t have MAPS, the NBA, etc. Moving forward, that leadership has to continue. The close relationship between City Hall and the Chamber has to continue. At the same time, we all recognize the city is evolving and that leadership has to come from more parts of the city if we are to continue this momentum. I’ll be working with business leaders to build a bigger table so everyone feels like they have a voice in major decisions. I’ll also be working with business leaders on MAPS 4 and education, because those issues will require everything we have to be successful.

Four years from now, what is your vision for what Oklahoma City will look like?

We’ll have core services we’re extremely proud of. We’ll have more quality of life investments coming that ensure our momentum for another decade. We’ll have a hopeful vision for public education that we’re pursuing together. We’ll have a decision-making process that the whole city feels a part of. And I think with those things in place, we’ll have continued job growth and a continued sense of pride and optimism.