A local artist that has been contributing to the creativity of Oklahoma City for more than 15 years has added another dazzling piece at the city's historic McKinley Park in the Classen-Ten-Penn neighborhood. 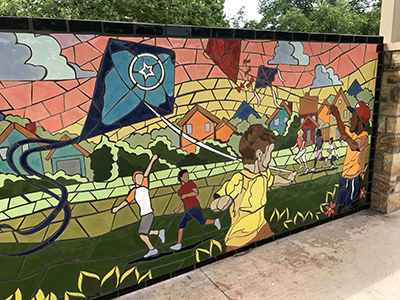 Artist Nick Bayer recently completed “Play” and “Learn,” a two-sided large mosaic piece of glazed ceramic tiles on the park’s main stage wall. The project was commissioned in coordination with the Office of Arts and Cultural Affairs and the city of Oklahoma City.

Bayer said he wanted to construct a bright and colorful backdrop for the stage that highlights the diversity of the neighborhood without being distracting to people watching performances.

The “Play” side shows children playing together with kites and a sunset over the neighborhood. The other face of the mural is called “Learn” which depicts Oklahoma City-born novelist Ralph Ellison as well as railroad workers, an old streetcar and some homes built in the style common to the neighborhood.

“The idea was to have one wall with two different stories that capture the storied history of the area,” Bayer said. "I hope it will help people understand that there can be more than one story about a place.”

Bayer's next work is already well in the planning stages. He has been commissioned to do another mosaic art piece at the MAPS 3-funded NorthCare Pete White Senior Health and Wellness Center.

“I will be working with their members in the design and creation of the mosaic. It is a very unique project and will be a one-of-a-kind art installation when it is completed,” Bayer said.