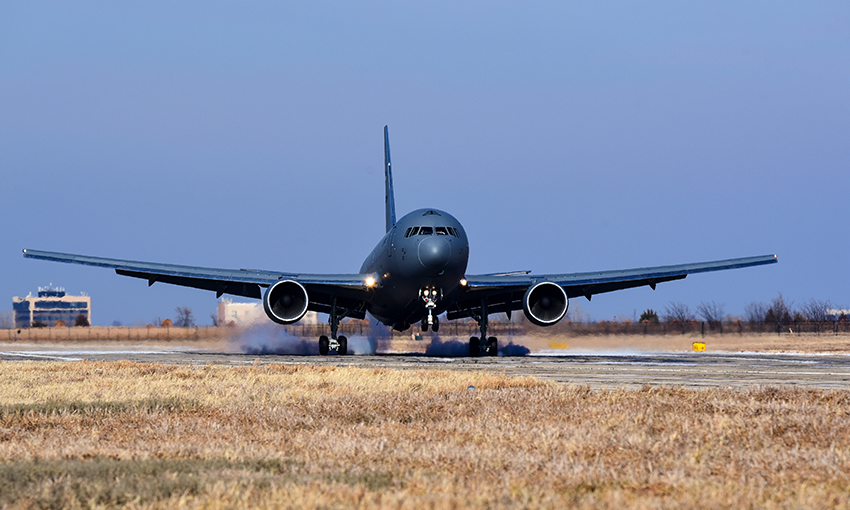 The Oklahoma City Air Logistics Complex continues to positively impact Oklahoma’s economy as the Air Force requirements increase for the construction of the KC-46 campus at Tinker Air Force Base.

The massive program, which began in 2019, is expected to take more than a decade and result in more than $600 million in construction. The construction project is the single-largest to hit Tinker Air Force Base since the 1940s.

Read more about the aerospace industry in Oklahoma City

The KC-46 Pegasus is the Air Force's newest air refueling platform and will eventually replace the KC-135 Stratotanker, which has been in service in various configurations since the 1950s. Air Force aerial refueling tankers routinely support U.S. Navy and Marine Corps aircraft during combat operations and non-combat activities, such as training and long-distance movements, as well as providing similar support to American allies and partners overseas.

“Getting to be on the front end of a project that will have an impact well into this century is very unique,” said Daniel de Robles, an area engineer at the Central Oklahoma Area Office. “It is a great opportunity for the staff we have out here for the corps.”

At peak production, the 568th AMXS anticipates an output of approximately 90 aircraft per year around the 2031 time frame, with projections to grow the workforce to over 900 employees.

The new 156-acre maintenance campus will eventually boast 14 hangars: 11 single-bays, two double-bays and one triple-bay, with facilities to handle maintenance, repair and modification operations. The campus will also feature a system integration laboratory and new taxiway as well as a substantial area for future expansion.

The first hangar was completed in October of 2019, and a two-dock hanger is 96% complete and scheduled to be turned over to the Air Force in October, according to Tinker spokesperson Mark Hybers.

“In the past nine months, the concrete on the hangar floor and the exterior have been completed. They are working now to finish the parking apron and the interior finishes,” Hybers said. “The installation of the heating and ventilation systems, the telescoping platforms, and the hangar’s fire suppression system is complete and testing and commissioning are underway.”

The OC-ALC was also recently awarded a contract to construct an underground industrial wastewater line from the KC-46A campus at the southwest corner of the base to Tinker’s existing Industrial Wastewater Treatment Plan (IWTP) at the northeast corner of the base. Construction has just begun on the three-mile-long line that crosses Tinker’s airfield. It will carry industrial waste generated in the painting and de-painting process to the IWTP for treatment before sending it to the Oklahoma City Wastewater Treatment Plan for final treatment. The work is scheduled to be complete by the end of 2021.

“While the KC-46A project is still years away from reaching its full operational potential, the value of hiring qualified individuals to help meet the growing requirements will only keep Oklahoma City and Tinker Air Force Base growing,” Hybers said.