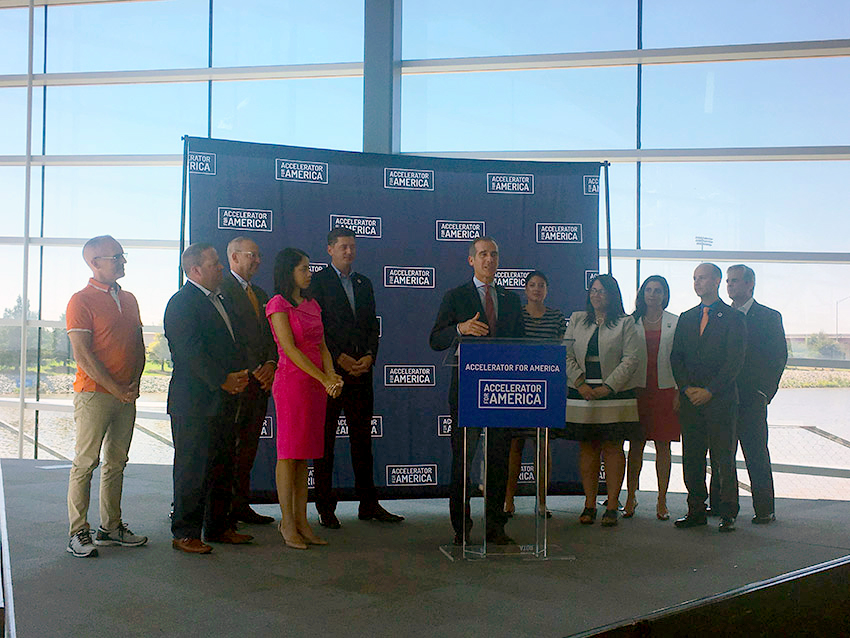 Los Angeles Mayor Eric Garcetti is joined by other mayors, including Oklahoma City Mayor David Holt, while speaking Friday at the conclusion of an Accelerator for America visit. The organization consists of mayors and other municipal leaders that are working on initiatives to bring more jobs and investment into America's cities.

The Accelerator for America organization is less than two years old, but it's already counting a recently announced project in Oklahoma City as one of its victories.

The organization of mayors and other municipal leaders launched an Investment Prospectus to help attract developers to cities' Opportunity Zones. The federal initiative provides a tax break to investors who put their capital into under-served areas. Oklahoma City was the first to get the prospectus and now 43 other cities have a similar package ready for investors.

Mayor David Holt said Friday that because of Accelerator for America's prospectus, the city was able to get the Historically Black Colleges and Universities as one of the investors in Homeland opening a store and corporate office at NE 36th Street and Lincoln Boulevard. Holt said it was on the first wins for an Opportunity Zone in the city.

Holt hosted the Accelerator For America Advisory Council meeting last week, where several mayors and municipal leaders took a tour of the city, learned about the Metropolitan Area Projects and MAPS 4, rode the OKC Streetcar, and shared ideas on how to improve their own cities.

Holt said mayors are often envious of MAPS and what its done for the city. In other states, similar initiatives can't be done because of state legislation.

"If you're a mayor in America, you've heard of MAPS," Holt said. "We're seeing interest from elected officials in other cities because they want to see us write the next chapter in the MAPS story."

Los Angeles Mayor Eric Garcetti said MAPS 4 is the best MAPS ever. As the Accelerator Advisory Council Chairman, he said the organization always enjoys stopping in cities that are moving America forward and Oklahoma City is one of those places.

"We see things we want to bring back to our own hometown," he said. "We all love MAPS 4."

Chicago City Clerk Anna Valencia said she can see the tremendous vision that has been laid out in MAPS 4, adding that the package is phenomenal.

Rochester Hills, Michigan Mayor Bryan Barnett, who also chairs the U.S. Conference of Mayors, said the Accelerator's goal is to get action quicker than what's being provide at a state or federal level. He said it's an exciting time to be a mayor in cities is where the action is being found.

"We want to create an opportunity for every person that lives in our city," he said.