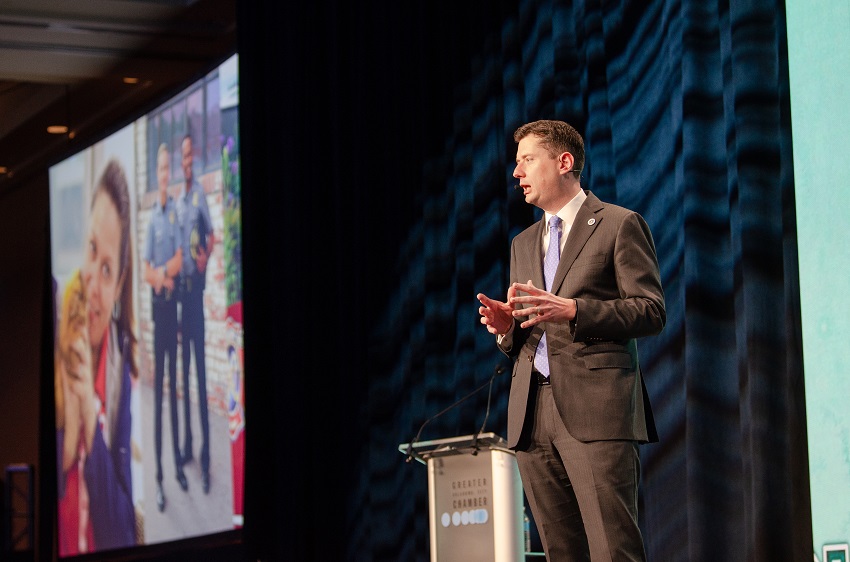 Holt recognized the event as a special opportunity for the community to come together and consider important issues. And one of the most significant issues in the last 25 years has been the various MAPS projects. The decision to undertake those projects has proven to be a game-changer for Oklahoma City.

“Twenty-five years ago last month, the voters of Oklahoma City made the now-legendary commitment to the first MAPS, our city’s groundbreaking initiative to improve our quality of life,” Holt said. “On that December day, we decided to invest in ourselves, to meet challenges and seize opportunities, and nothing has ever been the same.”

The mayor touted surveys that consistently show the residents of OKC are more than satisfied that, when it comes to the daily services citizens rely on, the city is meeting expectations.

“How do we know? We ask you,” he said. “Every year, our city conducts a scientific survey of our citizens, and the results have been consistent for a decade. You are the most satisfied customers in the nation. Almost across the board, you rank our city services very high, higher than other citizens in other cities rank theirs. And listen to this, as a place to live, 82 percent of our citizens say Oklahoma City is good or excellent. That is 28 percentage points higher than the national average for a large city. Twenty-eight points. The national average is 54 and we’re at 82. Do you know how powerful that is when I’m pitching Oklahoma City to job creators? That I can say the people who live here love living here more than the people in any other large city?”

But not everything is bouquets and rainbows. While recognizing the Better Streets, Safer City effort that OKC voters approved last year, the mayor acknowledged that street repair is a constant issue.

“In OKC, we use property taxes to fund our street infrastructure because Oklahoma is the only state in the union that restricts property tax use for cities to only infrastructure, not operations’” said the mayor. And of course, we have a culture in Oklahoma that has generally preferred lower property taxes than other states. So, put all that into a formula. Enormous city limits, low property taxes, property taxes are what we use to fund street repairs. This isn’t rocket science. It all adds up to the reality that our streets are going to fall below your expectations.”

“On that same day, the voters of OKC approved a permanent sales tax largely dedicated to police and fire, most notably the addition of over 120 new police officers, so that we could keep up with population growth and development, response times could improve, officers could reliably count on back-up, and our officers would have the time to do community policing and really build relationships with their communities,” he said. “Our citizens, our Mayor and Council, our business leaders, our police and fire departments, and our police and fire unions all moved as one and got the funding approved.  It will take time to implement, but I’ve already attended two police graduations in the nine months I’ve been in office, so the work is underway.”

The mayor also addressed transit concerns in the city, highlighted by the recent opening of the streetcar system, which just saw its 100,000th rider.

“Transit faces the same challenges of sprawl I mentioned earlier. And for a long time it was not a service we were proud of. But a decade ago, you could sense that this community’s commitment to transit was changing, and work began around that time that has really paid off in just the last few months. This past year was the biggest year for transit in Oklahoma City in half a century.

I believe the opening of the streetcar will be remembered as a catalyst for transit support in our community and a milestone in our city’s renaissance, a moment when things felt a little different than they did before.   Also last month, we received the exciting news that we had received a federal grant to open our first bus rapid transit line.  Bus rapid transit is a compromise between rail and bus that is a lot more affordable than rail and has proven popular in many communities around the nation.  And finally, in a matter of days the first meeting of the state’s first Regional Transit Authority will be held.  The culmination of a decade of planning, this new entity joins OKC together with Edmond, Norman, Moore, Midwest City and Del City to plan an intercity commuter system.”

The highlight of the mayor’s presentation may well have been the unveiling of what’s next for OKC, how those ideas were solicited and when we can expect to vote on them.

“So let’s talk about our next big dream. Let’s talk about MAPS 4,” he said. “We asked what was important to you. What are the challenges we need to meet and what are the opportunities we need to seize?   We are doing this primarily through a web site – Ideas4MAPS.com – but we’re also receiving ideas via mail, social media, conversations and meetings. I’ve posted in message boards, I’ve opened scary boxes that arrived at City Hall, I’ve left no stone unturned in seeking your feedback. Last week, I visited with kids from Positive Tomorrows at the downtown library to hear their thoughts. After all, MAPS initiatives are once-in-a-decade opportunities and the course we set is as much for those kids as it is for us.”

The mayor said that the original MAPS initiative included endowments and not just brick and mortar solutions and that it may again be time for that type of innovative thinking.

“We have the model from MAPS 1, and we could also tweak it in a way to make the endowments perpetual, extending the legacy forever,” Holt said. “Put another way, the proceeds of a temporary tax, put aside and managed responsibly, could produce reasonably expected returns that meet certain specific needs till the end of time. This is a groundbreaking idea for government, but it’s one commonly pursued by non-profits, wealthy individuals, universities, churches, the list goes on. Today, I’m asking you to consider this endowment concept in the months ahead. If at its root the MAPS model was an example of a government trying innovative new approaches to solving community challenges, this endowment concept is just as innovative, just as groundbreaking, just as powerful. In that regard, it is in the tradition of MAPS as much as anything else.”

Holt indicated there have been more than a thousand ideas submitted for MAPS4, with some two dozen that have traction and fit the transformational tradition of MAPS.

The mayor also stressed the need to incorporate the diversity of OKC into the city’s decision-making process.

“As mayor, I view the disconnect between our decision-making and our population as an issue we must confront,” he said. “The current situation is not sustainable. It is my responsibility to do what I can to transition to a better way. If there are those who are not at the decision-making table, and let’s face it, there are, then we must build a bigger table. And it’s not just about race. We need decision-making bodies that reflect the different ages and geographies of our city, as well as the life experiences of women.”

Holt said that it is diversity that makes Oklahoma City a special place.

“I want you to also consider how the lingering echoes of that institutional racism present challenges today,” he said. “I want you to think about and appreciate our growing Latino community, our longtime Vietnamese community, our LGBT community, our Indian community, our Indigenous and Native communities. Some are more prevalent than others, but there is hardly a religious or international tradition that isn’t practiced somewhere in some corner of our increasingly cosmopolitan and diverse big league city. Through understanding of that, we’ll find continued empathy for each other, we’ll continue to set aside the things that divide and work towards a common purpose. As we have for so long. But we must double down on the idea of One OKC, because everything else in this country wants to tear us apart right now. But it has been the Oklahoma City standard since that day in April 1995 not to let them do it. We are special here in Oklahoma City, and we must always hold that dear.”

Holt closed by listing some of the recent accomplishments that continue to make OKC a great place to live, learn, work and play.

“The lowest unemployment rate in 18 years, led by the Amazon announcement, perhaps the single biggest jobs announcement in our city’s history. Major announcements of new missions at Tinker Air Force Base. Continued high bond ratings reflecting strong fiscal management.  Continued work on criminal justice reform. The excitement around Opportunity Zones and how they could help challenged areas like Northeast 23rd or the former Crossroads Mall site. The restart of the American Indian Cultural Center. New and exciting developments in the arts, like Factory Obscura and the construction of Oklahoma Contemporary. More progress towards the completion of our Land Run monuments. All the top tier concerts coming to Chesapeake Arena this year. A thriving food culture, led by the naming of Nonesuch as the best new restaurant in the country. Great work by our City-County Health Department, who opened a major new center last year in South OKC. The opening of the world-class Asia exhibit at the Zoo. The continued success of the OKC Memorial Marathon as it changes course to take in South OKC for the first time. The continuing addition of nonstop flights from our airport, now bringing us to 28, resulting in a record-breaking year of over four million passengers. The NBA championship parade we’re going to host in June. We all still have those moments where we pinch ourselves and think how did we come so far? But 2019 is a year to think about what more we can do.   And what we can do to ensure everyone feels that renaissance. 2019 is a big year. We have an ambitious agenda ahead of us. Let’s work together to get it done, as we always have, as one OKC.”