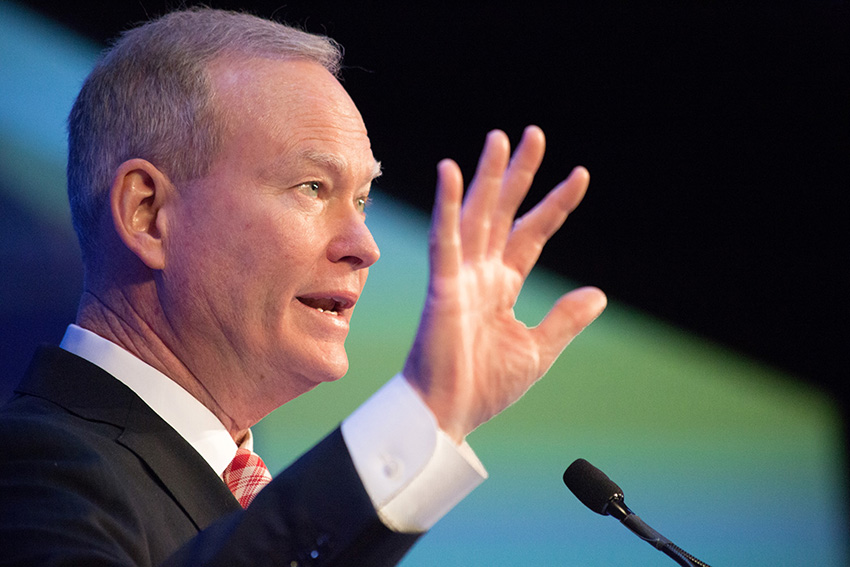 “We have taken a city that had been branded by tragedy and built it into a cosmopolitan economic powerhouse known for its compassion,” Cornett said. “If you think the last five years have been remarkable, you are right. But the next five years will be even more dramatic.”

More than 1,100 business and community leaders gathered to hear from Mayor Mick Cornett at the Chamber’s State of the City event on Thursday, Jan. 18. As Oklahoma City’s longest-serving mayor, Cornett reflected on his 14 years in office and the successes and challenges of 2017.

Since he entered office in 2004, Oklahoma City has grown by approximately 150,000 residents within its city limits and added 100,000 jobs to its economy. Cornett pointed to Oklahoma City’s diverse workforce and low unemployment as further proof of Oklahoma City’s success over the last 14 years.

“It appears people are moving into the city as fast as jobs are being created,” Cornett said. “We are still known for energy jobs and corporate headquarters in the energy industry but only three percent of our workforce is now employed in oil and gas.”

The mayor also highlighted several other areas of accomplishments and progress in 2017, including:

Cornett was also quick to recognize the areas in which Oklahoma City needs improvement, specifically the intersection of poverty, mental illness and homelessness and the needs of our education system.

Key to addressing Oklahoma City’s community needs is the philanthropic efforts of its nonprofits, including the work done by the Family Justice Center, The Homeless Alliance and Heartline, among others. The community’s work to reduce incarceration, especially in instances where a person is in jail just because they can’t afford to pay fines and fees, is also a key part of addressing inequality in Oklahoma City.

The mayor also discussed Oklahoma City’s education system and the 24 districts that serve its children. Cornett also said that education cannot stop when people are in their 20s. To meet the demands of today’s economy, more people need to engage in ongoing education opportunities.

“Education is a shared responsibility,” Cornett said. “There’s a role for all levels of government and the business community. We have to produce graduates with problem-solving and critical-thinking skills who are prepared for college, career and real life. To get there, we are going to need a higher level of thinking.”

Cornett concluded his 14th State of the City address with optimism for Oklahoma City’s next phase of growth.

“We have taken a city that had been branded by tragedy and built it into a cosmopolitan economic powerhouse known for its compassion,” Cornett said. “If you think the last five years have been remarkable, you are right. But the next five years will be even more dramatic.”