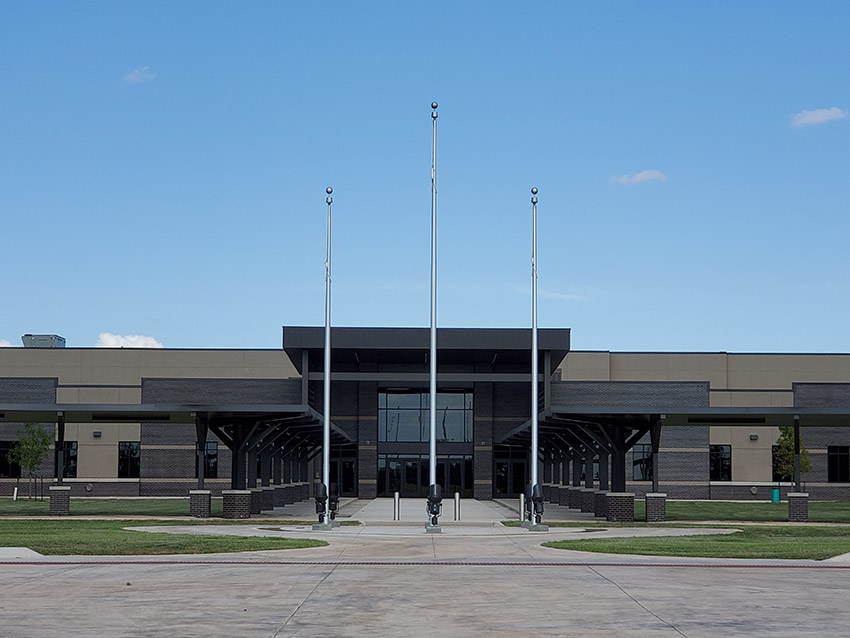 School districts across the metro are continuing to expand their campuses as more students move into their boundaries. Whether it’s a whole new building or a tornado-shelter addition, schools in Greater Oklahoma City have been working to provide a top-notch learning environment.

Much of that work starts with a bond package that goes to voters. CMSWillowbrook construction company worked with Deer Creek and Mid-Del school districts to formulate the bond packages’ sizes and scopes.

“Working with schools is our bread and butter,” said Cristy Callins, vice president of pre-construction at CMS. “School leaders have always been respectful and allowed us to be a good partner with them. They value us and trust us to keep them informed along the way.”

Take a look across the metro at where these projects are happening and see what Chamber members have been busy bringing these facilities to life.

In the northwest corner of the metro, Deer Creek Public Schools opened a fourth- and fifth-grade building this month. Superintendent Ranet Tippens said the district adds about 400 students a year and has seen that same pattern for the last 15 years.

“Every two years, we need a building for 600 students or more,” she said.

The original plan was to build two schools, but land prices have increased in the area as more homes are sold to families wanting to be in the district. Eventually, a landowner sold the district 120 acres at NW 206th Street and N Meridian Avenue. The intersection’s northeast corner is home to the fourth- and fifth-grade school and will eventually have another school on site as well.

The fourth- and fifth-grade building was part of the 2016 bond package, which CMSWillowbrook helped to formulate based on the district’s needs and projected construction costs. MA+ Architecture designed the school, KFC Engineering’s Brandon Birch and Jenny Arrowood provided their structural design expertise to the project and CMSWillowbrook built it.

MA+ Architecture Principal Gary Armbruster said the school was designed as two schools within one building. If needed in the future, it could become the site for other grades. The building is designed in two pods for each grade, with about 800 students per grade.

Armbruster and his team met with teachers, community members and district leaders before they started working on the school. Some of the requests that came out of those meetings and made it into the school were multiple bulletin boards and additional storage space in the classrooms and common areas in the hallways for guest speakers or multiple-class meetings.

Of course, student safety was part of the discussion as well.

“This will be one of the safest buildings ever built in terms of the interior design,” said Armbruster. “The line of site is very good.” 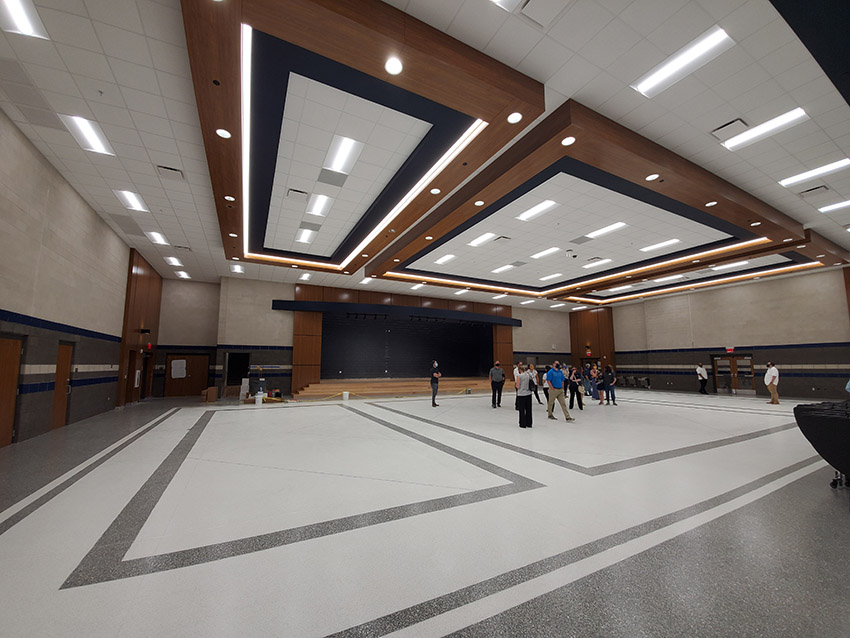 The MA+ team checks out the firm's work on the cafeteria at the new Deer Creek school.

The school will likely be the site of many district events and activities. There are two gyms on the site, allowing the grades to have their own space and the district to have a spot for multiple sporting events.

The key design element in the school is the cafeteria, which can be used as an event space for the district, holding up to 750 people at round tables. There’s a stage in the cafeteria and a top-level sound system. Tippens said, when allowed again, the district’s foundation is already planning to host class reunions and sports banquets in the space.

The cafeteria kitchen is built for catering needs as well.

“With the community’s input, we created a space that will not only serve a valued purpose during the day, but will become a place where celebrations are held and memories are made for years to come,” said Armbruster.

History is being made as land is cleared for the district’s first school on the east side of Interstate 35. The Pre-K to fifth-grade Redbud Elementary School will open in August 2021 at full capacity, said Susan Parks-Schlepp, public information officer for Edmond Public Schools.

Parks-Schlepp said the school reflects the Redbud tree and ties how a tree grows to how the students will grow as well.

On the west side of Edmond, preliminary planning work has started for Scissortail Elementary. Red Plains Professional, Inc. is planning the site for the district. The building is designed by the Stacy Group and will be constructed by CMSWillowbrook at NW 150th Street and N Pennsylvania Avenue. It will open in August 2022.

Scissortail will help alleviate some of the classroom growth seen at other schools, said Parks-Schlepp.

Nearly $40M of the 2019 bond issue was used to purchase land and fund the construction of the two elementary schools, Redbud and Scissortail. Since 1959, the district’s residents have passed 59 bond packages.

There’s another bond package slated for voters in February 2021, though it will not include a fourth high school.

“There’s been a lot of interest in a fourth high school and for a long time, we thought it would be imminent,” she said. “But the growth patterns have really been seen at the elementary schools. We have purchased land at E Air Depot Boulevard and N Covell Road for a fourth high school, but we know it will be a $100 million-plus endeavor because it will be a large campus.”

Nonprofit organization Fields & Futures is continuing its mission to improve the athletic facilities at the district’s schools. This year, F&F with its many construction partners, completed a practice field and track at Wheeler Middle School, FD Moon Middle School, and John Marshall Middle School. The organization and its partners also built a new softball field at Classen SAS High School.

There are several projects under construction across OKCPS’ athletic facilities. A new softball field is being built at U.S. Grant High School, with a baseball field to follow. Classen SAS at Northeast is getting a track and practice field, with the district funding a new baseball field. Capitol Middle School will soon have a futsal court and Southeast Middle School is getting a practice field and a softball field, which will be shared by Southern Oaks Park. The district is also funding new tennis courts at NW Classen High School.

People interested in helping the OKCPS athletic facilities stay in tip-top shape can contribute to F&F’s Field Maintenance Endowment, which can be found at https://fieldsandfutures.org/donate/.

From 2007 to 2017, the district saw an increase of nearly 2,000 students, so a bond package was passed in 2017 to make sure there were enough facilities to meet the growth. 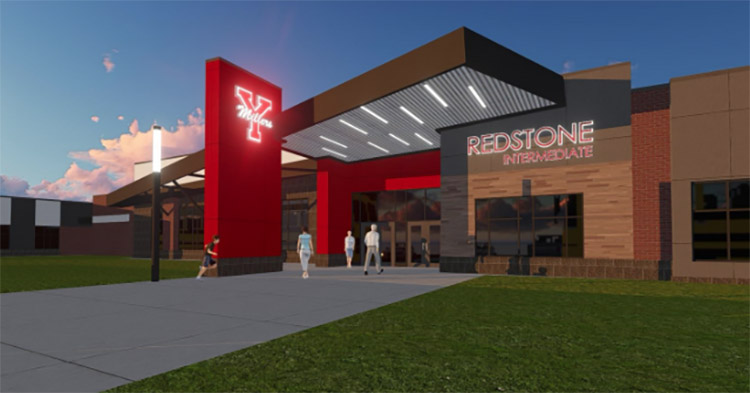 One of those projects from that package is Redstone Intermediate School, opening this fall for fourth-to-sixth grade students. The $25 million, 120,000-square-foot building at N Mustang and W Britton Roads will be the district’s 13th school site. It was designed by The Stacy Group with Wallace Engineering providing structural design services and Wynn Construction Company bringing those plans out of the ground.

The last school Yukon constructed was the high school, which was completed in 2011.

Two buildings have been made larger and two other facilities that are important to student life have been updated  for this school year.

Schwartz Elementary on SE 104th Street and Midwest City Middle School on E Reno Avenue were expanded this year. At Schwartz, a gym and four classrooms that can double as storm shelters were added, with a connector built to the existing building. The project totaled $7.9 million.

At the middle school, $10.9 million was spent on 15 new classrooms and a gym that can also be used as a storm shelter, measuring 20,000 square feet. 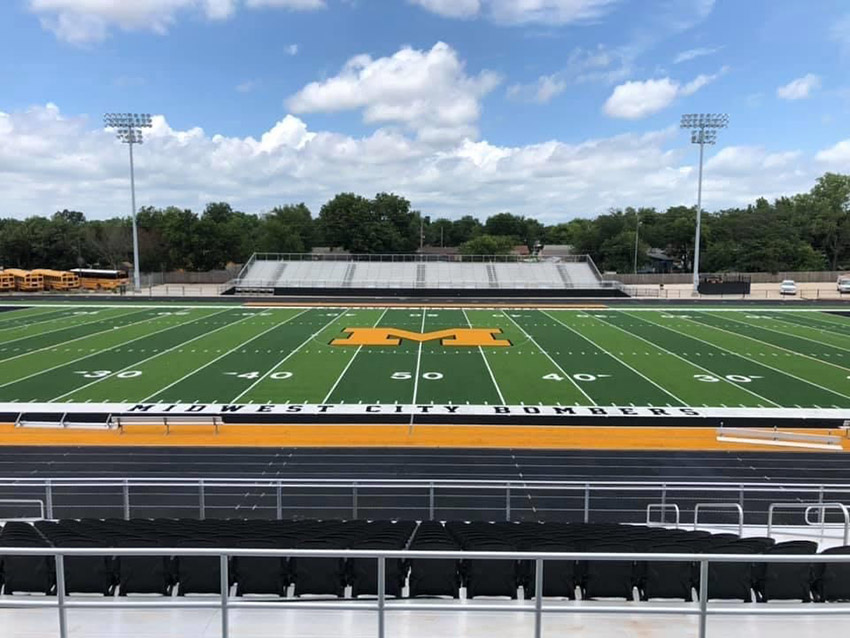 New visitor grandstands are ready for fans at Rose Field.

At the field, the fan experience will be better this season with new visitor grandstands, three additional buildings that include visitors’ concession stands and restrooms, an athletic facility with locker rooms and a hospitality suite. There are also new home concession stands and restrooms. The press box facade was updated and a new ticket booth was added. In total, $9.3 million was spent on making Rose Field into an even higher-caliber place to play. 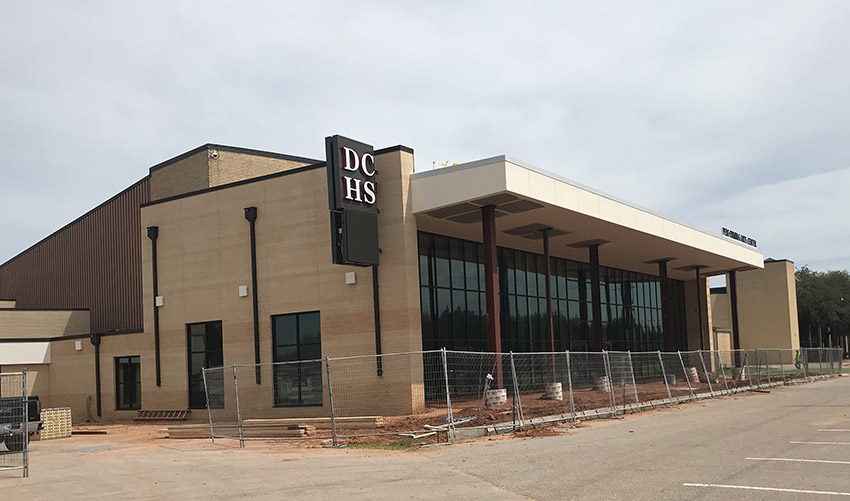 Memories will soon be made at the new addition to the Del City High School performing arts center.

In Del City, the arts center received a $3.2 million update. The center now has a grand lobby and the existing lobby was made even better. Upgrades were also made to the auditorium and the stage curtains.

The district will welcome students to its state-of-the-art Capps Middle School. Designed by LWPB Architecture with construction management provided by Lingo, the 161,000-square-foot school was built across a creek on a 44-acre site. The original Putnam City Central Wildcat terrazzo floor block was moved from the old middle school into the new building.

“Capps Middle School will be a showplace, a model school that will become known nationally not only for its unique design, but also for its utilization of cutting-edge technology and learning opportunities for students,” said Superintendent Fred Rhodes.

Starting in spring 2021, the district will be able to host a variety of events at its new performing arts center. Designed by MA+ Principal and partner Heath Tate with structural design services provided by KFC Engineering, the $24-million facility is being constructed by Crossland Construction. It will be a highly-sought out place for band, drama and choir performances.

The district will also open a multi-purpose practice facility in the spring. 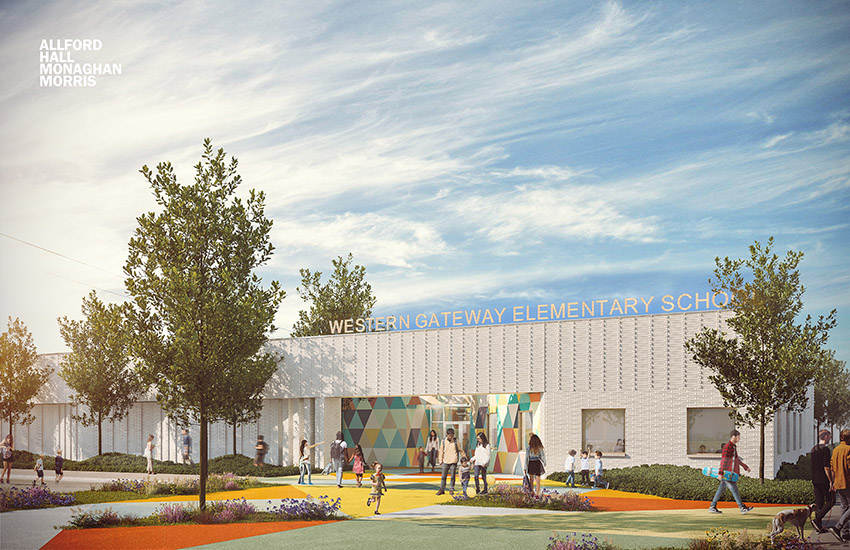 The building was designed by architectural firm Allford Hall Monaghan Morris and structurally engineered by Wallace. The school is arranged around a 6,700-square-foot internal courtyard which creates outdoor learning spaces to inspire creativity and innovation.

AHMM Associate Director Wade Scaramucci said his firm is finishing construction drawings in the next seven weeks. He said AHMM is known in Britain for its school designs. As a south OKC native himself, he has a strong interest in projects that are helping to regenerate that part of the city.

The school will be led by Heather Zacarias, who previously served as elementary education director and interim superintendent at John Rex Charter School. Zacarias said she’s excited to return to south Oklahoma City, where she previously worked early in her educational career. She was fluent in Spanish several years ago, so she said she’s getting reacquainted with the language.

She said she’s looking forward to visiting dual immersion schools in other cities and states in the future. She plans to start hiring in early 2021, with the goal of recruiting December college graduates.