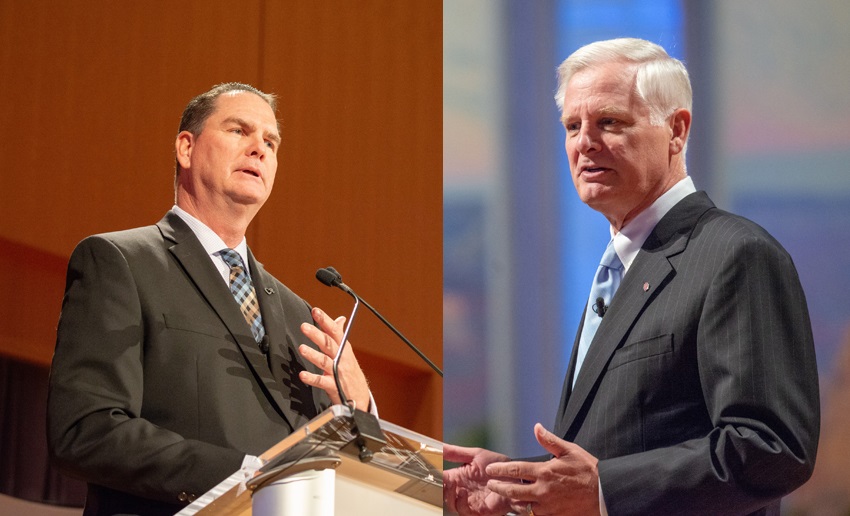 What do Oklahoma City Public Schools and the University of Oklahoma have in common? More than you might think.

Both have new leaders, for one thing.  Oklahoma City Public Schools got a new superintendent this year and the University of Oklahoma appointed a new president. Each of them talked about the challenges their systems face and how they plan to address them during the Greater Oklahoma City Chamber’s annual State of the Schools event.

Superintendent Sean McDaniel and President Jim Gallogly said their institutions need to improve their graduation numbers, but they’ll take different routes to get there.

McDaniel focused more on equity issues within his district, one of the most diverse in the state and facing some of the highest rates of poverty.

“I think for me, when we talk about equity, we're talking about providing access to opportunities for everyone,” he said. “Everyone in the district, regardless of what part of town they live in, we want them to have access to opportunity. Many times, what they do with opportunity, they're going to need help with that and we cannot be fully responsible for that. But, what we can be fully responsible for is providing access to the opportunity and removing obstacles that are in the way between our kids and that thing we call potential.”

Gallogly focused on financial reforms the school will have to undergo to begin reinvesting in the faculty and double the university’s research efforts.

“What we have to do, instead of putting capital in bricks and mortar, we now have to invest in human capital,” said Gallogly.  “We have not been paying our faculty well. Just like what's happening in the state of Oklahoma in K through 12 teacher pay, we have that same dynamic going on at the university level. We also need to go out and make cluster hires and bring in great scientists. We will not be able to accomplish doubling that research effort and driving the economy of the state of Oklahoma if we don't invest in that research, and that means new dollars, new programs to build out that research effort, to drive our economy. That's significant dollars but it's an investment that this state must make. It's an investment we must start to make.”

McDaniel didn’t paint a rainbows-and-unicorns picture when discussing some of the district’s challenges. Of the district’s 45,000 students, about 90 percent experience poverty to an extent that qualifies them for free and reduced lunches. One in four students have at least one parent who has been incarcerated. Last year, more than 3,000 were identified as homeless. McDaniel said he is "laser focused" on providing access to opportunity for all students to succeed in the classroom.

“Our kids today are the most creative, innovative and compassionate kids we’ve ever had in any generation,” he noted. “They’re going to make it, but they need our help.”

The district has already begun implementing some programs meant to improve those indicators. U.S. Grant High School opened a child care center, where students who have become mothers can take their children during class.

The district also implemented a program that creates a teacher track for bilingual non-teaching staffers. Oklahoma City students speak more than 50 languages, he said, and about 54 percent of them speak Spanish.

“We have a bilingual teacher pipeline,” he said. “This is one of the most innovative things that we have going. If you are a support employee in Oklahoma City Public Schools and you speak Spanish, we will pay 100 percent of your bachelor's degree and plug you in as a teacher in our school system. Right now, we have 39 teachers in the pipeline and we will add that to our teacher corps very soon. That is something that we need more and more and more, and we're excited for that to grow.”

Gallogly told the nearly 600 business leaders in attendance that issues with equity continue from K-12 to higher education.

"A lot of students that come to us at the university are not properly prepared, We're not doing the job right either place now," Gallogly said.

"Not all of them have the same opportunity. We need to really work on that.”

Oklahoma's economy "depends on us getting this right," he said. Efforts to recruit and educate a diverse student population must improve at OU so all students “start out with an equal opportunity when it's time to go into the workforce with everybody else,” he said. "There are so many window-dressing things that people do. I'm interested in graduation rates. Frankly we're going to have to do a lot better job than we've done in the past on that.”

Graduation rates are an issue at OKCPS, as well.

“You may be familiar with Fields and Futures,” said McDaniel. “They had a vision that, if kids will stay in school and graduate, they will become productive. How do you keep kids in school? You appeal to them. They've got to have something they connect to. And so, Fields and Future said we're going to build brand new athletic complexes and fields at every middle and high school in the district. We know the mountain of evidence and research that speaks to kids who belong to some sort of extracurricular or after-school program. Their chances of graduating exponentially increases. They will stay out of trouble. They'll attend more. All those good things, outcomes that we desire, will come to pass.”

Despite the challenges they face, both leaders are optimistic about the future.

McDaniel said there is greatness all across the public school district in Oklahoma City. “Greatness everywhere. Everywhere you turn, you will see a pocket of it. The expectation needs to be that we will have an excellent school district and that that will dominate the narrative moving forward. Not, it's kind of good over, here it's really good over here, it's not so good over here. We expect to have an excellent School District and so I think the narrative has to change that way and we do that by action.”

“The one thing I want to be very clear about here is, just like every time we take that football field and you expect us to win, you should expect the same thing of your university in the classroom, because frankly our future depends on it, the economy of this state depends on us getting this right, time after time after time.”

Two dynamic leaders, both with a clear vision of what it will take to produce the qualified workforce to keep Oklahoma’s economic engine humming.