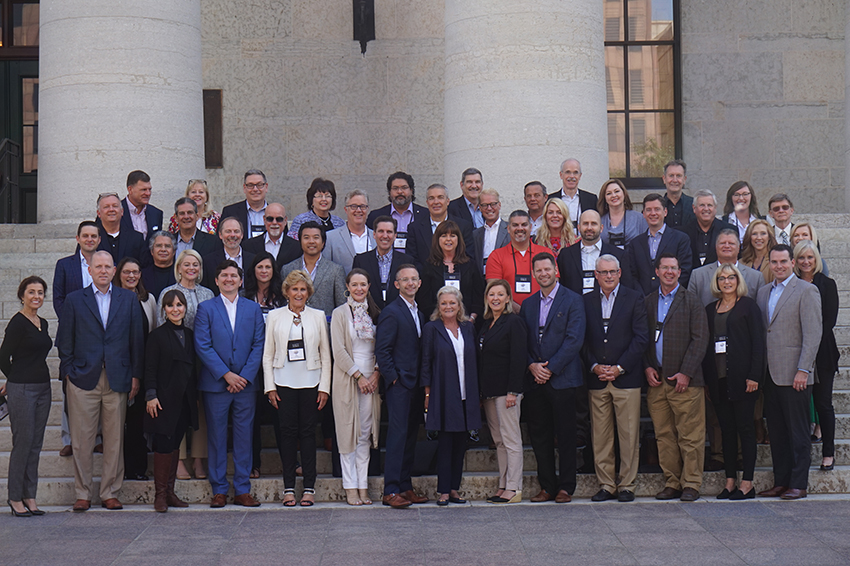 This is the second article in a three-part series that recaps the Chamber’s recent InterCity Visit to Columbus, Ohio. While Columbus and Oklahoma City share many similarities, Columbus’s model of success and growth is one from which Oklahoma City can learn.

Building the smart city of tomorrow

Out of 78 cities from 35 states, Columbus won the nation’s first smart cities challenge from the U.S. Department of Transportation, and with it $50 million to put their plan into action. The challenge asked mid-sized cities to develop ideas for an integrated transportation system that would use technology to help people and goods move more quickly and efficiently. Columbus’s smart cities plan is being implemented in four districts: a residential area, a commercial area, in downtown Columbus, and in an area dominated by logistics. All four have distinct challenges but will follow the same implementation plan. The plan includes making no-regret, foundational investments–things like sharing data between transit providers and modernizing the traffic grid. The next phase includes testing autonomous vehicles and smart logistics platooning. Finally, Columbus’s smart cities team plans to tackle the ultimate culture shift that must take place for these things to be adopted citywide.

While Columbus is only just beginning to implement its plan, it has already resulted in $500 million in private investment, with an eventual goal of $1 billion.

When Cleve Ricksecker, president of SID Public Services Association, moved to the Short North district of Columbus in the early 1990s, he said the disinvestment of the area was “unbelievable.” The Short North stretches from immediately north of downtown Columbus to just south of Ohio State University’s campus but is separated from the downtown area by Interstate 670.

“It became apparent early on that the highway was a huge impediment in encouraging investment in the new neighborhood,” Ricksecker said. “People were afraid to walk across the chasm to the north side.”

Ricksecker, who was the director of the Short North Association at the time, worked to solve the problem by advocating for a cap across the highway that would connect the two areas. After encountering several challenges, including acquiring land rights, moving utilities and finding a developer who would build on top of the cap, the project was completed, and it largely made the highway disappear and development surge. Now the community has added another cap over a highway in the King-Lincoln district, and the Ohio Department of Transportation is adding more pedestrian-friendly touches to bridges and street crossings throughout the area.

Downtown Columbus is in the middle of a vibrant resurgence, one in which Columbus Downtown Development Corporation (CDDC) has played a key role. Amy Taylor, COO of the organization, calls their role “the developer of last resort.” They come in and work on projects that developers can’t or won’t–and with stunning results. Their projects include Columbus Commons, an urban park on the original site of the former City Center Mall; Scioto Mile, a public green space that reconnected the Scioto River with downtown through parks, boulevards, bikeways and pedestrian paths; and the Lazarus Building, a former department store turned into a fully leased office building of almost 700,000 square feet.

The investments made in these areas have helped downtown Columbus recover from a severe decline in its resident population and, according to Taylor, help recruit a younger workforce. In 1950, 30,000 people lived downtown, but that number dwindled to just 2,000 residents in 2000, despite the area containing 12 percent of the city’s jobs and 85,000 employees. Now, 8,300 residents live in downtown Columbus, and there is virtually a 100 percent apartment occupancy rate.

This article originally appeared in the November 2017 issue of The POINT!