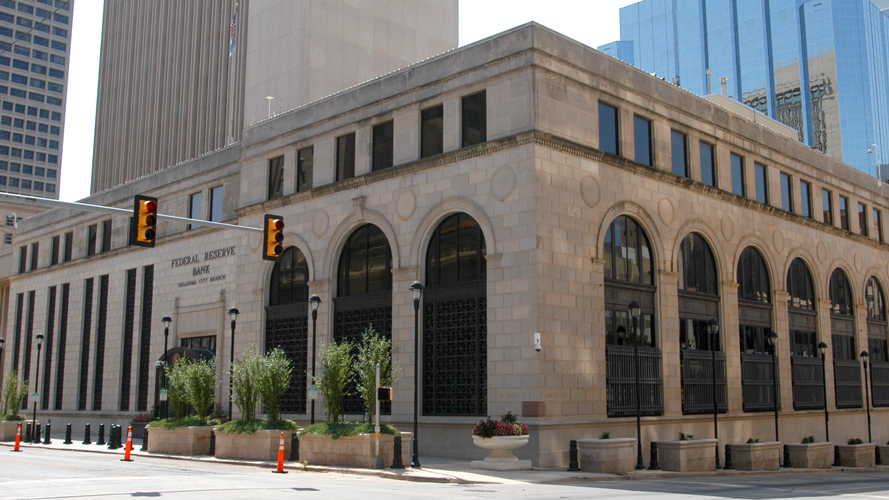 The Oklahoma City branch of the Federal Reserve Bank of Kansas City will begin honoring and commemorating its 100th birthday year on Aug. 2, 2020

“The Oklahoma City Branch of the Kansas City Fed has for 100 years now served as Oklahoma’s local connection to the nation’s central bank, ensuring open communication and service to the public and to financial institutions in the state," Chad Wilkerson, vice president and bank executive said. "We’ve done this through our local board of directors, as well as our various functions, including economic research, education, and outreach, bank examinations, community development engagement, and historically via the processing of currency and paper checks.  These local connections are always important, but especially in times of crisis like this present, or at times like the Murrah bombing, when working together to find sound economic and financial solutions is key.”

The Oklahoma City branch dates its beginnings to when offices opened in Oklahoma City Aug. 2, 1920. Initially located inside the Continental Building on Second Street and Broadway, the bank moved to its permanent location on Third Street (today Dean A. McGee Avenue) and Harvey in 1922.

The original staff consisted of 50 employees and their activities were primarily the collection of checks and the issuance and redemption of United States currency. By the end of the first month, the Branch had exceeded all expectations. More than 969,500 checks were processed for a total of $189 million.

The growth of the bank continued and the original staff of 50 was doubled to 100. It became necessary to obtain additional space for the operations of the Money Department by renting vaults and working space in the basement of the American National Bank.

The original site seemed to be a considerable distance from the downtown business section, but during the 1920s, the Branch also served as custodian for the War Finance Corporation, thus requiring frequent usage of the Post Office. The purchase price of the property was $65,000. Construction did not begin until May 1922, with an estimated cost of $450,000.

The cornerstone of the new Branch was laid on Dec. 7, 1922. A trowel, presented by the Oklahoma City Clearing House Association, was used to lay the corner-stone. Small quantities of minerals and agricultural products, representing the resources of Oklahoma, were placed in the cornerstone, as were copies of The Daily Oklahoman and the Oklahoma City Times.

The 100,000 lb. vault door was reported to be the largest west of New York. The vault was 21’ by 42’ inside and 12’ high at 247,000 lbs. The mass of steel arrived on a train flatcar. To get it to the building’s construction site several blocks away, it had to be moved on a steel truck that was pushed along with hydraulic jacks. It was a traffic stopper and could be moved only a few feet per day, as it took one to two hours to move five inches. Only government officials were used, for fear that a crook might try to slip in and get measurements. The moving of the vault was the largest moving job attempted in Oklahoma City at the time. The vault took 90 days to assemble and install.

Although the door was extremely heavy, it was perfectly balanced and could easily be closed with one hand. At night, the bottom portion of the floor was lowered approximately one foot, and the door would swing shut. There was no room for clearance between the door and the frame, and a single sheet of paper would keep the door from closing.

The new facility continued to accommodate the needs of the Branch until March 1958, when the property adjacent to the original building was purchased for $500,000 and expanded to meet the operational demands of the Branch. This was the beginning of a $2 million expansion project of the original building. Construction completed in 1960 would include a new vault, cafeteria and parking facilities. The expansion project also included the remodeling of the original structure. The project added 48,000 square feet to the old building. The old vault was left intact, but an even larger vault was added across a corridor from the old one. The new vault had four time locks and four sets of combination locks and the door weighed 88,000 pounds.

The new facilities continued to serve the bank until 1976, when a $2 million renovation project was approved. This project involved the consolidation of coin and currency operations and the relocation of the Securities Department. It also involved the expansion of Data Processing and Check Collection, as well as providing additional protection and security features.

In July of 1982 Oklahoma began going through a banking crisis. Banks turned to the Fed for support and lending as more than 100 banks closed in Oklahoma from 1982-90.

Christmas Day sub-zero temperatures caused the main water valve to break at the building flooding the vaults in the basement. Time locks on the vaults prevented access to the vaults until a few days passed and, when opened, water poured out of the vaults. More than 18 inches of water had accumulated in the vault.

The flood soaked records and documents of monthly meetings. The staff laid the documents out on different surfaces in departments all over the Branch in hopes that some information could be saved.

In 1986, a $1.5 million facelift of the building was approved. This project focused on improving energy efficiency and reorganizing the office space on the third floor. A new cafeteria and executive dining facility were also results of this remodeling project. This renovation carried the Branch through 1991, when a study was conducted on whether to build a new facility or renovate the existing building.

A decision was made to renovate the interior of the existing building and preserve the historical exterior in the process. This $10 million renovation project was completed in several phases, remodeling one floor at a time. The project began with departmental interviews in late 1991, to determine the needs of each area. Architectural designs were completed in 1993, and actual construction on the project began in early 1994. The final portion of the renovation project was completed in 1997.

On April 19, 1995, the building and its employees were affected by the large bomb that decimated the Alfred P. Murrah Federal Building. Windows crashed inside, the structure rocked and the front doors were smashed. Bank management had everyone evacuate to the Myriad Gardens.

In 2003, following the 2001 terrorist attacks in New York and Washington, D.C. Planters and Bollards were installed in front of the branch. The bollards are steel pipes laid in concrete eight feet deep into the ground. The planters in front were not for decoration. The large planters surrounding the building are full of heavy dense rebar. This is a security measure that would keep a vehicle from driving into the building.

In 2004, the Oklahoma City Branch was awarded the Perfect Partnership Award from the Oklahoma City Public Schools Foundation for the work employees did with its Partners in Education school, Dunbar Elementary.

In 2006, the new Oklahoma City Branch model was established, along with the Regional Affairs Department that provides economic analysis, conducts economic research and leads regional monetary policy communications. By the end of 2006, the Cash, Protection, Check and Facilities departments had all been dissolved from the branch leaving approximately 35 employees.

On August 14, 2007, the Oklahoma City Branch celebrated the opening of the newly renovated branch building with a ribbon-cutting and open house. All branch departments are now located on the third floor. The facility is approximately 22,000 square feet and houses exhibit space and a conference facility.

Although the building was sold in 2006, Oklahoma City Branch employees are still located in the heart of downtown Oklahoma City in Leadership Square.

For more than 100 years, the Branch has been the Federal Reserve’s conduit to the Oklahoma business community and an integral part of the Federal Reserve Bank of Kansas City’s work. As part of the nation’s central bank, the Bank participates in setting national monetary policy, supervising and regulating numerous commercial banks and bank holding companies, and providing financial services to depository institutions. Additionally, the Oklahoma City Branch is focused on educating the community on economic and financial issues.