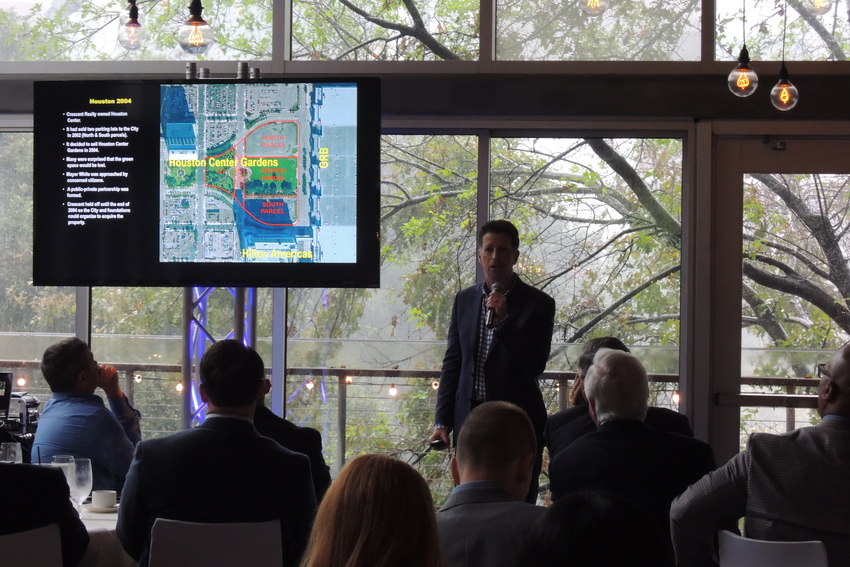 Houston’s development of Discovery Green was an area of study for the Oklahoma City delegation.

In November 2019, the Greater Oklahoma City Chamber took a delegation of its members and other community leaders to Houston for the Chamber’s 14th InterCity Visit. This benchmarking trip serves as a factfinding and best-practice learning mission for people committed to impacting Oklahoma City’s future.

Houston, the fourth-largest city in the United States, is larger in scope than most cities that the Chamber has visited in the past, but shares many similarities with Oklahoma City.

“The most obvious similarity, of course, is the impact of the energy industry on Houston’s history and current economy,” said Chamber Chair Percy Kirk during the trip’s opening session. “But we also saw similar cultural influences and challenges between Oklahoma City and Houston, and many ways in which we can learn from Houston’s development, including the growth of the Texas Medical Center, Houston’s increasing diversity and its status as an international trade hub.”

Attendees heard from Stephen Klineberg, Founding Director of Kinder Institute for Urban Research, and Professor Emeritus of Sociology at Rice University. For 33 years, Klineberg and his team have conducted the annual Kinder Institute Houston Area Survey, which provides a way to track the changes in demographic patterns, economic outlooks, experiences, and beliefs of Harris County residents.

Klineberg’s research shows that Houston has become the most diverse city in America and can be considered a picture of what the United States’ demographics will look like in 50 years. According to Klineberg, the future success of Houston depends on making sure that opportunities for prosperity extend beyond white America. “If Houston does not prepare its African American and Hispanic communities to succeed, then Houston will not be successful,” Klineberg said.

Houston’s development of a downtown park was another area of study for the Oklahoma City delegation. During the MAPS 3 campaign in 2009, the Chamber took Oklahoma City leaders on a site visit of Discovery Green, Houston’s downtown park that opened next to their convention center in April 2008. In the 10+ years since Discovery Green has been open, Houston’s downtown development has soared. New hotels next to the park have opened, downtown housing is booming, and the downtown districts are becoming more walkable and connected by transit options.

Like Oklahoma City, Houston also has a close economic tie to the oil and gas industry. It wasn’t until the 1990’s that Houston attempted to diversify their economy. One area of focus is medical and bioscience innovation. With a natural tie to the Texas Medical Center, Houston is boosting its innovation ecosystem through programs like TMC Innovation Institute, an organization that connects entrepreneurs and innovators with the member institutions of the Texas Medical Center.

Chamber members at the Board of Advisor level and up are invited to attend the InterCity Visit each year. To learn more about membership, contact your membership manager or Sunny Cearley, Chamber vice president of membership, at scearley@okcchamber.com or 405-297-8948.

This story originally appeared in the March 2020 issue of The POINT!