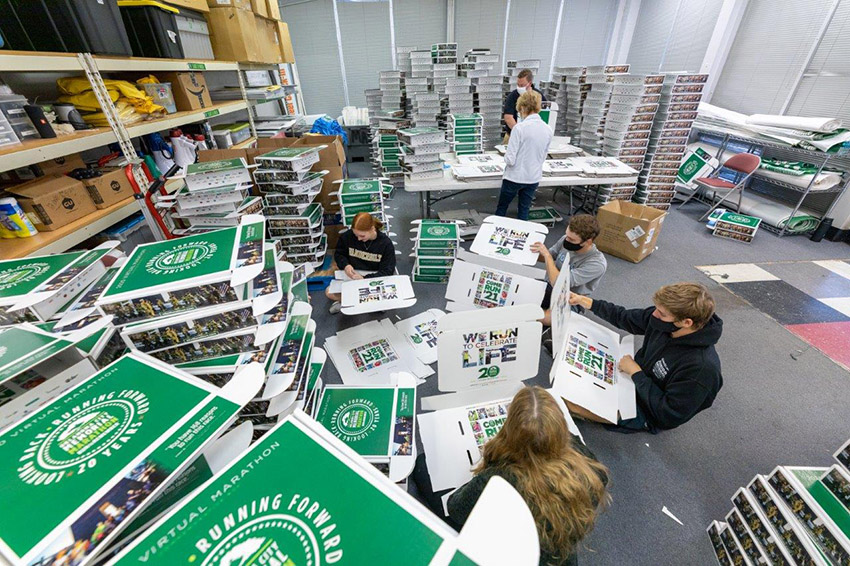 Volunteers pack the boxes of marathon swag that were mailed to every participant.

When the Oklahoma City Memorial Marathon announced it was moving to a virtual event, participants stuck around for the cause.

The industry average for virtual marathons is about 20%, said Kari Watkins, executive director of the Oklahoma City National Memorial & Museum.

“We have 80% of our registrants participating and they’ll be running in all 50 states,” said Watkins. “We’re very very pleased with the participants and how much they’ve embraced it.”

With people running in every state, the bombing tragedy and the compassion and perseverance that followed will get shared across the U.S. People donned with the memorial race bibs will trek through their neighborhoods, or even across the Golden Gate Bridge like Terry Baransy.

Participants have from Sunday to Oct. 18 to complete their distance and record it. People who record their times get 20% off their 2021 registration.

The marathon worked with bicycle tourism company, Ride OKC and local bicycle stores to launch the new option. There are 500 cyclists registered to date.

“We know a lot of people took up cycling during COVID, so this option has worked out really really well. We’re excited that people are willing to try something new,” said Watkins.

“We thought we’d get maybe 10,000 people,” said Watkins. “We’re grateful to all those people who hung in there with us.”

The marathon is the largest fundraiser for the Memorial Museum. Like other museums across the U.S., visitor traffic is down about 60% this year and remains slow. Then with schools meeting virtually, their largest traffic uptick would have been student groups in the fall, but that’s not happening anytime soon. The museum is stocked with STEM lessons for classes.

“Our numbers are not where we need them to be,” she said. “We’re grateful to have a nice endowment, so we have a safety net. There was one week where we had as many people here as we would normally get on one Saturday.”

This would have been a big year for the marathon and the museum, with two notable anniversaries happening this year.

The marathon was launching a new course, with a finish line area in Scissortail Park. Marathon and half-marathon participants were given finish line blankets in the marathon-swag boxes they were mailed because people could have used the blankets at the park for the after-party.

There will still be some fun on Sunday though, with the Gorilla Hill neighbors taking to the street to welcome runners. Other cheerleaders will be around downtown as well. Watkins said if participants come downtown to run, she hopes they’ll run by the memorial. Runners get free admission to the museum with their race bib.

She encouraged people to watch the television special at 8 a.m. on KFOR, where the marathon organizers  took a look back at 20 years of running. Holt asked counterparts in other cities to make comments about the event. Tyler Media is hosting a radio show Sunday evening as well.

“I’m really excited about the fact that we have runners from all over the country running; though we wished they were here, staying in our hotels and eating in our restaurants," she said.