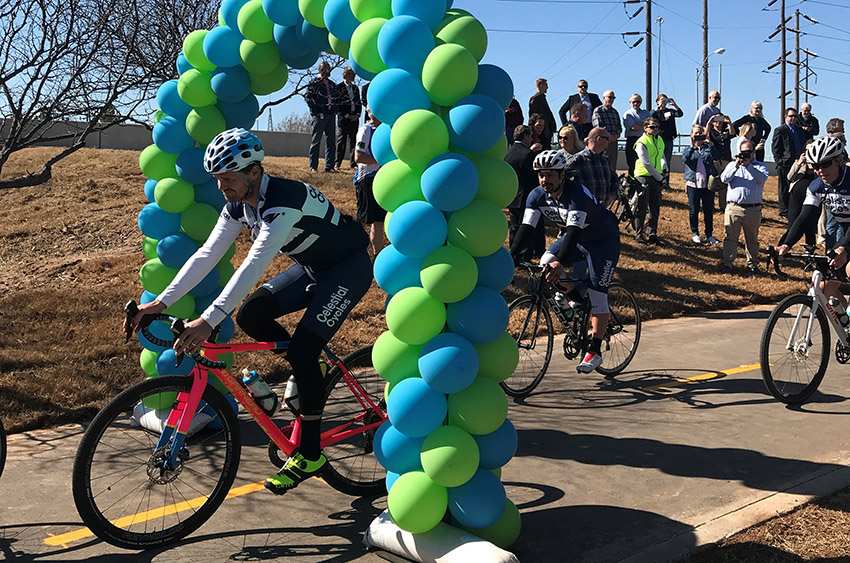 Cyclists and community leaders celebrated the opening of the MAPS 3 Will Rogers Trail in March.

With voter-approved funding from sales tax collections, the City of Oklahoma City continues to invest in infrastructure and public projects throughout the community. From improving streets, growing Oklahoma City’s transit options and adding connectivity with trails, funds generated by a penny sales tax are transforming Oklahoma City into a better place to live and work.

Oklahoma City’s first neighborhood trail opened in March as civic leaders cut the ribbon on MAPS 3’s Will Rogers Trail. As the second of three trails funded by MAPS 3, Will Rogers Trail connects Lake Hefner with the Oklahoma River.

The trail then follows Interstate 44 south as it wraps around the north side of State Fair Park, then turns south following May Avenue to the south trailhead on the Oklahoma River Trails system. All but two blocks of the 8.1-mile trail are protected, and the entire path is ADA-compliant, multi-use and designed for two-way traffic.

Also in March, city officials broke ground on the MAPS 3 Lake Draper Trail, which circles Lake Stanley Draper with a 13-mile path. The $12.6 million trail is expected to be completed this fall. The Lake Draper and Will Rogers trails join the 7.5- mile West River Trail, which was completed in 2015, in connecting thousands of residents, workers, shoppers and visitors to the growing Oklahoma City trails system.

The first modern streetcar for the Oklahoma City Streetcar system was delivered in February, marking the initial milestone in a year full of progress for the MAPS 3 project. The streetcar will have two route options: a 2-mile Bricktown loop, and a 4.8-mile mainline serving the rest of the central urban core. Five streetcars have already arrived, with two more slated to be delivered before the end of the year.

Altogether, the streetcar will serve 22 stops with five streetcars, which ride on rails flush with the street. Each streetcar can carry 104 passengers, and stops will be served every 12-15 minutes. Streetcars have already begun testing on the Bricktown loop section, and service for the entire project is expected to begin in late 2018.

The preponderance of this article originally appeared in the April 2018 edition of Cityscape.