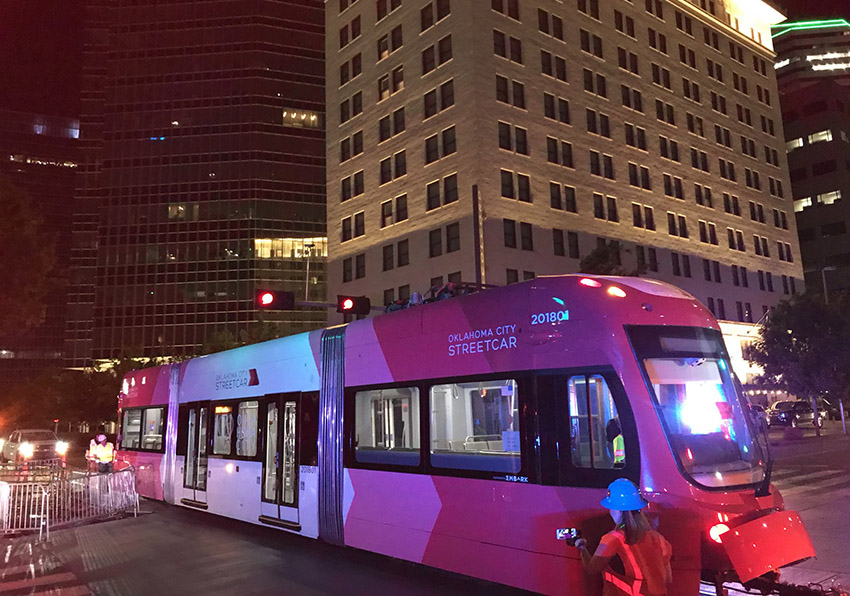 “If you want to see changes in public transit, where it starts is with you… It provides a vital service for the community.” –Michael Scroggins, Manager, Marketing, Customer Relations & Technology, EMBARK

In 2009, voters approved a modern streetcar system as part of OKC’s landmark MAPS 3 projects. With the excitement of the first car’s delivery and a well-attended open house, as well as what you might call the “forced discovery” of new routes to familiar locations downtown due to rail construction, OKCitians understandably have plenty of anticipation and questions about the streetcar system. Recently, members of the Chamber’s OKC News Bureau got a chance to sit down with Michael Scroggins of EMBARK and Joel Garcia of Herzog Transit Services to hear about the streetcar system, how construction is progressing and where we’re headed as a future streetcar city--in addition to checking out a streetcar firsthand.

The first implementation of the Regional Transit 2030 Fixed Guideway Plan, the OKC Streetcar will significantly improve pedestrian connectivity downtown, giving people the ability to move about more freely and enjoy downtown’s many amenities and activities without worrying about driving and parking--as well as helping introduce users to the larger public transit system, enhancing economic development along the route, and reducing congestion and air pollution to boot. Known as a “circulator,” the system is designed with possible expansion to the Deep Deuce/Oklahoma Health Center/innovation district area, the Capitol Hill district and others in mind should conditions favor it.

According to Scroggins, the system is about 90 percent complete when it comes to the construction that impacts road closures. All the utilities along the route have been cleared, and about 90 percent of the demolition work to lay track has been completed, with about 85 percent of the actual track installed. Revenue service is scheduled to begin late this year.

How will this work?

Right now, the streetcar is scheduled for 17 hours of service daily Monday through Thursday (7 a.m. to 12 a.m.), and until 2 a.m. on Friday and Saturday nights. Service will run on Sundays during special events, such as conventions, OKC Thunder games and such. There are two “loops” or streetcar routes. The main Downtown Loop, or “D Line,” is 4.86 miles long and will service all 22 stops and carry passengers through five downtown districts. The Bricktown Loop (“B Line”) is 2.04 miles long, will only service the southern portion of the route, and will run on weekends and during special events. 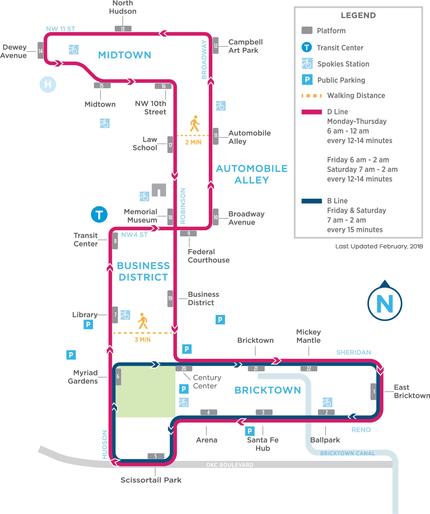 There will be ticket machines on each platform, but there will also be a mobile app that will give riders the ability to pay for their fares with their smartphones, in addition to trip planning and ticket sharing features. Non-single trip streetcar fares will also allow the use of the “Circ” downtown bus circulator to enhance the ability to reach other areas in downtown. A single trip fare is $1 per boarding, while a downtown day pass is $3. Monthly downtown passes will cost $32, and an annual downtown pass is $384. 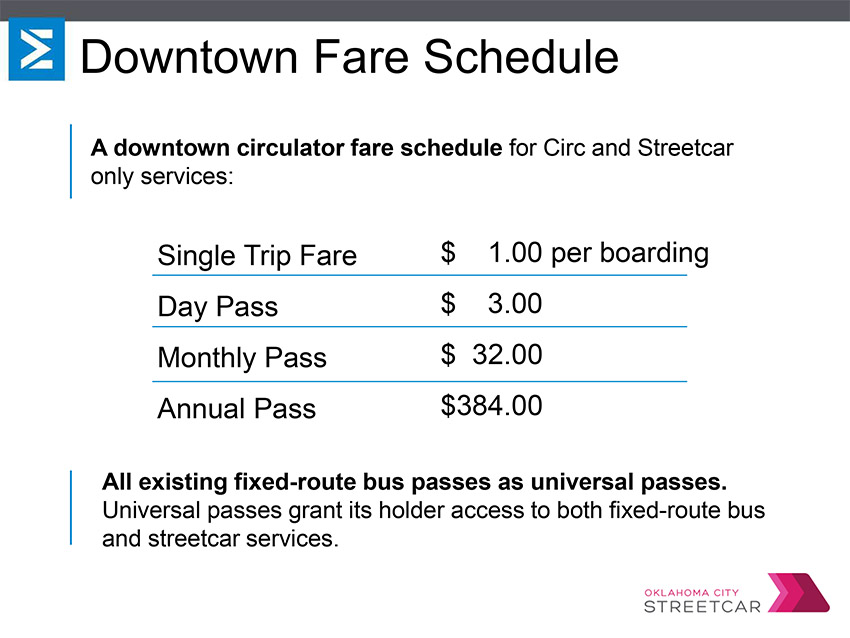 Exact wait times are to be determined, but right now EMBARK is estimating 12-14 minutes between trains, Scroggins said. “It depends on how fast people get on and off, how traffic behaves around the streetcars, if anybody is waiting at the platform, and such,” he noted. In order to keep traffic flowing as freely as possible and to decrease the amount of time between stops, the streetcars will not stop at stops where no one is waiting and no rider has requested a stop. “We do that with buses and it’s a pretty standard national feature” when it comes to transportation systems, Scroggins said. Should someone desire, it would take approximately 30-45 minutes to ride the entire Downtown loop, with less time on the Bricktown loop. EMBARK is estimating using 4-5 cars on a given loop at peak periods.

In spectacular color schemes of Redbud, Bermuda and Clear Sky Blue, each of the seven streetcars are ADA accessible from zero-drop, flush platforms, run on rails flush with the street and can carry 104 passengers. When launched, Oklahoma City will have the largest off-wire, battery-powered portion of any system in the nation. The wireless portions of the route are necessary due to the need to travel under the railroad viaducts and other places where the use of the overhead catenary system (OCS) is untenable. “We’re a pretty unique system as well compared to others around the country. At launch, we’ll have the largest system in the country in terms of percentage of off-wire travel. We’ll have 60 percent of the system on-wire, and the rest battery-powered,” said Scroggins.

According to Scroggins, safety is a big focus, not only for riders but for pedestrians, cyclists and drivers as well. EMBARK leadership has been attending weeklong training sessions all over the country in preparation for the launch. EMBARK and their communications agency, Greater OKC Chamber member STAPLEGUN, have also produced signage and videos intended to help the public understand how to operate vehicles in proximity to the streetcar and how to be safe as a pedestrian or cyclist. In addition, each streetcar must log at least 310 miles of testing before they are able to be certified to carry passengers. The process of testing is underway now, and is expected to last until November-December for the Bricktown loop.

Related to safety are some new city rules, regulations and laws that are necessary to run a modern streetcar system. “We’ve got new parking and traffic ordinances, and also permitting rules around the new OCS (overhead catenary system) foundations,” Scroggins noted, in addition to new ordinances governing fare collection, street furniture, advertising and other operational necessities. Streetcars operate in traffic and obey the same laws as regular motorists, but also have their own signal lights (that are based on the direction of a white line) that at times will allow a wide left-hand turn for the streetcars across an intersection while all other drivers have a red light. Drivers will need to watch their own signals and not accidentally follow the streetcar in such a situation. “You don’t want to follow [the streetcars] because you’ll get ticketed, and also create a hazard,” Scroggins said.

Scroggins noted that community interest has been high, with more than 500 people attending a recent Streetcar Open House event. EMBARK is planning another event near the Bricktown Ballpark in the fall to show off the platforms and accessibility features (watch EMBARK’s social media and here at VeloCityOKC for more information on that event).

Of possible interest to Chamber members is the ability for businesses to sponsor a streetcar platform, which will give visibility and advertising to the sponsor throughout the streetcar system. Scroggins noted how, in addition to cost savings, “‘buying local’ with public transit advertising also helps us. [Businesses who have] supported us over the last few years through transit advertising have allowed us to operate night service on route 22…. And that’s a vital service for a very important part of town.” Interested businesses should contact EMBARK for more information on platform sponsorship opportunities.

The Greater OKC Chamber and Greater OKC News Bureau would like to thank Michael and Joel for their time and their very informative presentation. We can’t wait to ride!