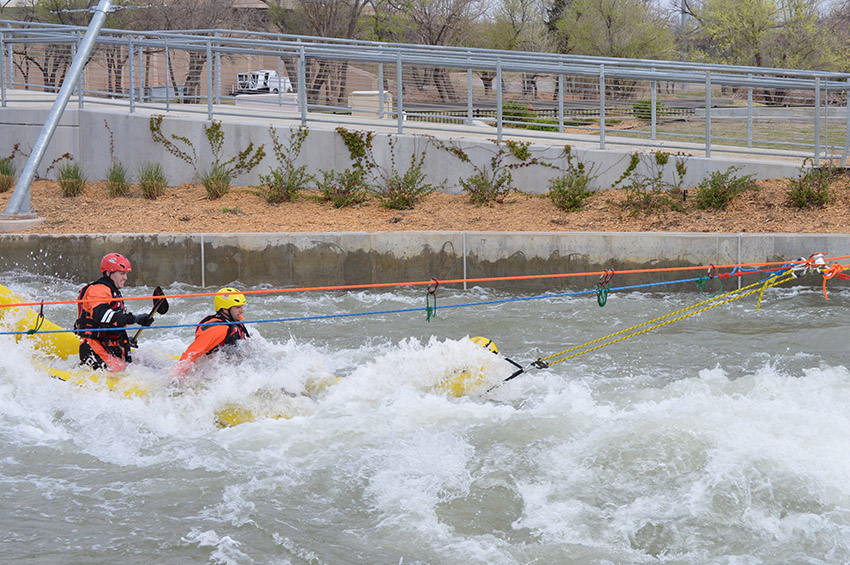 A crew practices a moveable control point operation during a training class at the Riversport Rapids.

Greg Merrell knows the blue blocks under the Riversport Rapids as well as a raft guide.

But he doesn’t see the angles as a physical challenge; rather, he sees them as teaching tools.

Since the Rapids opened in 2016, more than 80 swift-water training and related water-rescue classes have been held at the center, with crews from more than a dozen states and Canada traveling to the city for the emergency preparation.

OKC Boathouse Foundation Director of Corporate Engagement Melanie Borger said before the Rapids opened, the foundation expected first responders to use the center for training. She said she’s also received a call from a fire department in Chile about going through the classes.

“We just didn’t know what the demand would look like when we first started and that it would be such a regional draw,” Borger said. “We expected that the local fire departments would train here, but we’ve had departments from all over Texas, Missouri, Kansas and Arkansas. It’s been rewarding to do.”

Siloam Springs Fire Department Captain Robbie Washington brought a few of his teammates from Arkansas for the training class. He said coming to Riversport allowed his team to practice the techniques in a safe, controlled environment.

“We have a river, but you have to watch out for a lot of natural stuff under the water that you don’t have to worry about in the Riversport Rapids,” he said. “There’s no way to duplicate that (type of training) without being in a flood situation.”

There are 15 people on the Siloam Springs swift water rescue team. Taking the classes at the Rapids has made them much more confident because the water they’ll deal with on a rescue likely won’t move as fast as it does at the center.

Washington and his crew also learned about maneuvering a boat in a current, which can be done in the Rapids’ pool area.

Merrell said that’s always an eye-opening part of the training. People think they can drive a boat, but it’s not the same in a current.

“You have to use the water to push you and help you get to where you’re going,” said Washington. “You have to angle the boat differently.  There isn’t anywhere else in the world where you can get training like that and you don’t have to worry about bumps or bruises.” 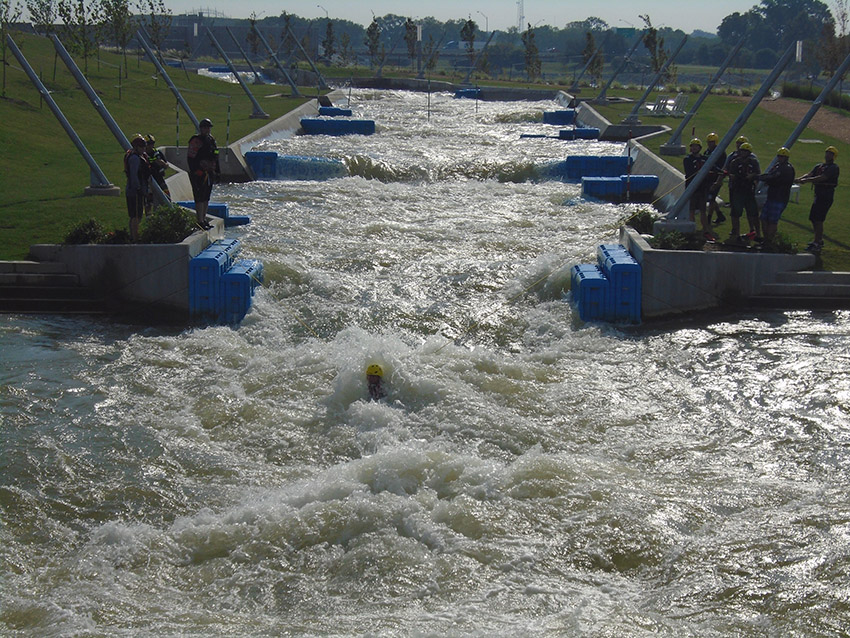 A team prepares to rescue another teammate in the Riversport Rapids near an eddy.

The Mid-America training sessions are four-days long, but with the first day being in the classroom and outside, the second day in a pool, and the third day making it to the Rapids.

Merrell and Weatherford spend the first two days teaching the crews how to set up the scene when they arrive, looking at how to rescue the victim and establishing an instant command system.

When they make it to the Rapids, the first lesson is about the water.

“The water flows different than a river,” Merrell said. “When it kicks up, you know something is there.”

On a walk through the dry Riversport Rapids, Merrell points at the angles on the blue blocks and how an inclined block makes the water move differently than just a flat top. The funneling points along the rapids create eddies, where the water churns, but these are also vital points where rescuers learn to get out of the water.

The blocks can also be put together to imitate vehicles coming down the rapids, another important rescue method taught during the classes. The students learn proper diving techniques and the best life vest for them as well.

Merrell said the trainees usually come to the class thinking they know about water rescue, but after time in the rapids, they’re humbled.

“This kicks their butt,” he said.

Sedgwick County Fire Department 1 Lt. Aaron Muse said he brought some rescuers down from the Wichita, Kansas area for training in 2017. He specializes in water rescue for Sedgwick County, so he thought he was experienced and knowledgeable.

Then, he came to the Riversport Rapids in April, when the weather was in the single digits. Merrell helped his crew find dry suits so they could still get in the water.

“The stuff you’re taught there is invaluable,” he said. “Swift water is probably more dangerous than a house fire. Unless you know what you’re doing, you don’t need to be in the water. It’s awesome to go to the facility in Oklahoma City because it’s a controlled environment.”

Muse took the lessons he learned back to Sedgwick County and held a class for the rest of his crew. While they didn’t get to hop in the water, the knowledge will still be helpful should they be the first to arrive on a scene.

Because as Merrell explained, a firefighter has to do something when he or she arrives on the scene. Merrell is also teaching the courses to police departments, especially those in smaller towns. In rural areas the fire department is backed by volunteers, so the police will likely be the first on the scene.

Even if it means teaching a free class, Merrell said he and Weatherford just want to make sure first responders are properly trained.

“We can’t train them for every scenario, but we want to make sure they know what they can do,” Merrell said. 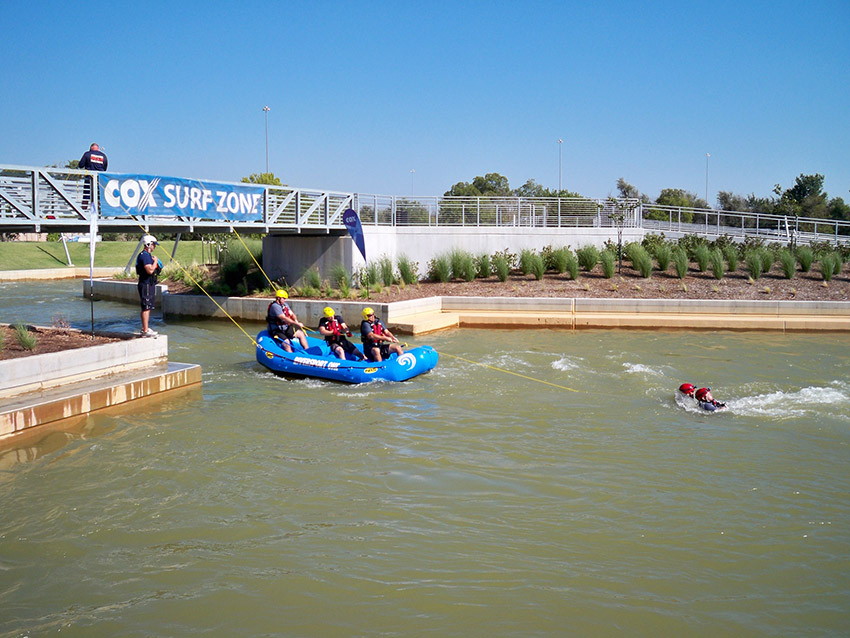 Learning to use a boat in the current is another important part of the rescue training at the Riversport Rapids.

Besides being the site for the vital training, the Boathouse Foundation is pleased to have the first responders at the center because it allows for a maximum use of the facility. Borger said on a weekday in April, when the general public might find it too cold to be in the water, that’s the prime time for the firefighters and their equipment to be in the water.

The training also helps create a relationship with the first responders and the foundation. When Merrell and his crew from the Oklahoma City Fire Department, as a part of Oklahoma Task Force 1, were called to help with Hurricane Harvey in Houston, or more recently Hurricane Dorian, he was able to borrow rafts from Riversport Rapids to help with the rescues.

“It’s kind of surreal to think that these little rafts that we use to provide so much recreation and entertainment can also be instrumental in saving lives,” Borger said.

But the training offered by Merrell and Weatherford has also become instrumental in saving lives, especially with all the flooding this past summer. Washington from Siloam Springs said he’s put his new swift-water-rescue knowledge to use already in northwest Arkansas and northeast Oklahoma.

Sam Dameron with the Manhattan Fire Department and Kansas Task Force 1 said he's also put the training to use when responding to Harvey and Dorian. Having the same training as the Oklahoma task force helps everyone be on the same page when it comes to saving victims. Kansas Task Force 5 has attended training at the Rapids as well.

Hearing how people have used the training is the best part of the business for Merrell.

“There’s nothing cooler than when coming calls you and says they’ve made a rescue,” he said. “When they do that, it makes you realize how important the training is.”