Oklahoma City MAPS Director David Todd gets goosebumps when he thinks about visiting Scissortail Park when it opened in September.

“Everyone in town was there,” he said. “It wasn’t just one group of people. It was everybody.”

The park’s motto, “For everyone,” has come to life as residents from across the city have integrated Scissortail into their routines. The immense amount of space makes it a safe place to be outside and socially distant. Many free activities have filled up Scissortail’s event calendar, such as yoga on the Love’s Travel Stop Stage, the OSU-OKC Farmer’s Market and starting July 8, there will be weekly free movies shown on the Great Lawn, hosted by Myriad Gardens.

The park is expected to get even more traffic when the city starts welcoming guests to the Oklahoma City Convention Center and the Omni Hotel open in 2021.

But the hill that’s perfect for a good roll and the picturesque lake are only 40 acres of the 70-acre total Scissortail Park. Plans for the final 30 acres are being reviewed now, said Todd.

“We hope to have those out for construction bids in August,” said Todd. “We’re looking to break ground at the end of September.” 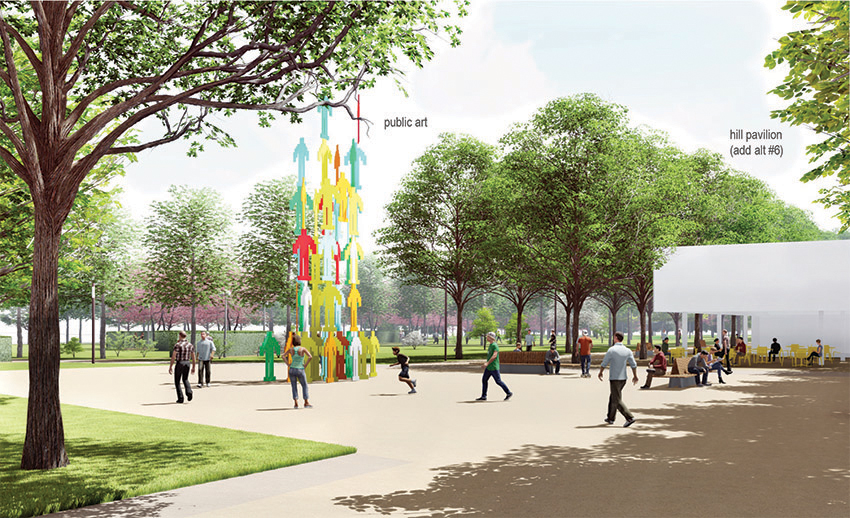 The two sections are connected by the iconic Scissortail Bridge that spans Interstate 40. The resurfacing project on the bridge will be wrapped up soon and it’s expected to reopen to foot traffic in August.

The lower park will have courts for playing futsal, basketball and a couple soccer fields. The area will have a large hill as well, but it won’t be as high as the hill on the north side. There will be a paved walking path and large meadow area as well.

“We’re preserving a lot of the existing trees on the site,” said Todd. “The grove of trees near the interstate will be preserved.”

The lower park will be the final piece to open of the MAPS 3 initiative, which ended with extra money. Of those funds, $18 million will be used to restore Union Station, with another $1 million set aside to take the lower park all the way to the river. Work on the extension will come at a later time, Todd said.

The lower section of the park is expected to open in spring 2022. Todd said after seeing the public’s reaction to the upper park, he’s motivated to get the lower part finished.

“I can’t wait to get this piece done,” he said. “The community’s reaction has been fantastic.”