Rapids: the Olympic story on the Oklahoma River grows 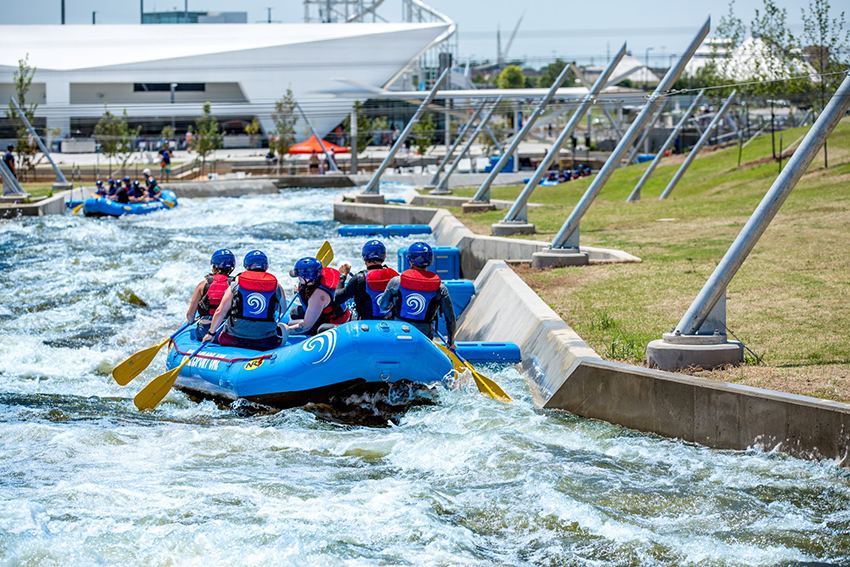 Editor's note: this overview of rafting on the Oklahoma River is part of our multimedia feature "A River's Rise to Olympic Rings". We hope this intro on the Oklahoma River encourages you to check out the "A River's Rise to Olympic Rings" feature story on greateroklahomacity.com and share it with family, friends, neighbors and potential residents/investors.

For athletes, and the adventure

Well down the list of original MAPS projects had been the unassuming entry titled “River Restoration.” In 1993, most voters are likely to have asked themselves, “What river?” The transformative power of the citizen-driven MAPS projects had long since become legend.

So in December 2009, voters approved MAPS 3. And in contrast to the first MAPS ballot, River Improvements led the list of proposed projects. 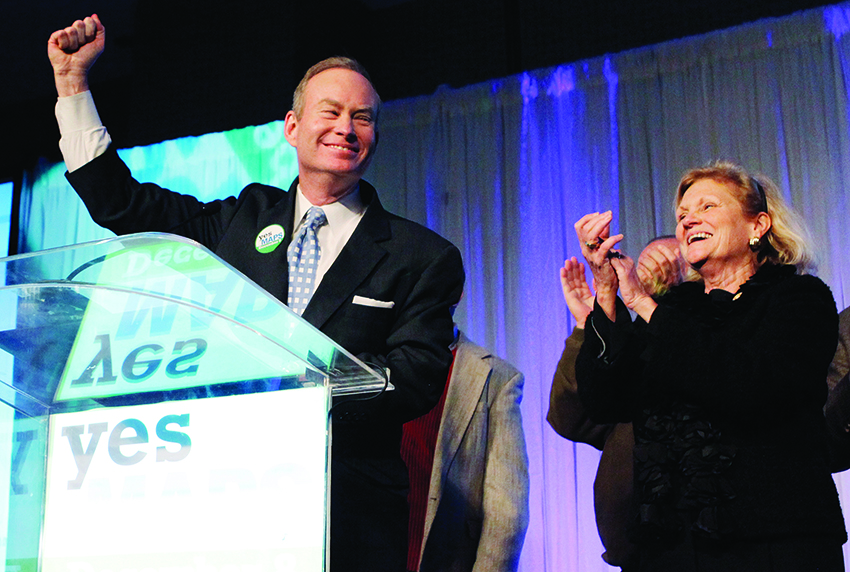 The new MAPS river amenities would arrive in two waves. First, the installation of permanent Stadium Lighting – a world’s first for a competition rowing venue.

The second was the showstopper, anticipated since the early stages of the river’s revival: a state-of-the-art Whitewater Center capable of hosting Olympic Team Trials for Kayak Slalom.

The value of lighting had been demonstrated here early, as the sport’s first “night racing” was embraced by athletes and spectators alike, under temporary lights. And in 2014, the first completed MAPS 3 project flooded the river with light. 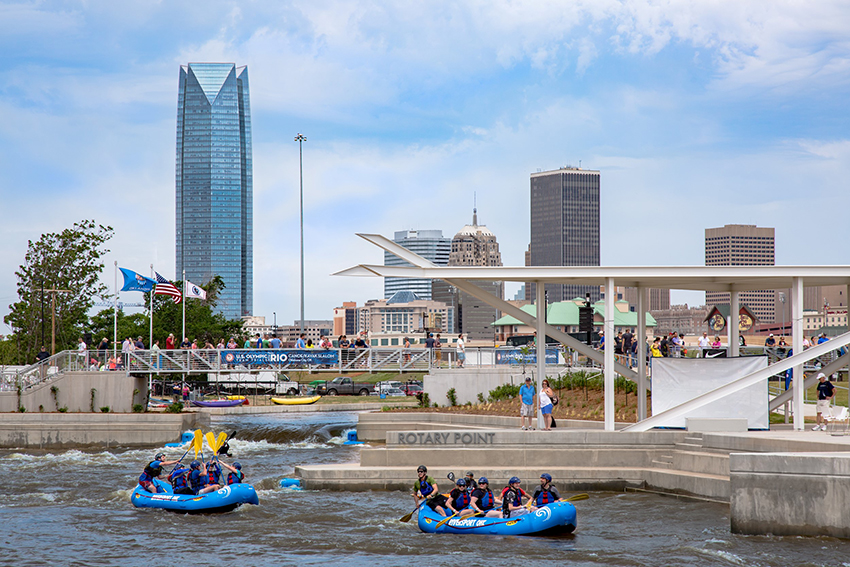 Technology is radically changing the world of whitewater. After eons confined to mountain streams – and only seasonal paddle-worthiness – it’s now being engineered to occur on a course. They can be designed to accommodate two very different conditions on the same course, from championship-level kayaking to families in a raft out on a lark.

The course can also be located just about anywhere with a flat and large enough piece of land. As in, no longer confined to the mountains, nor just a few months.

One has rapids intense enough for training elite athletes and hosting the U.S. Olympic Team Trials for Whitewater Kayak. The other has a less ferocious flow for recreational rafting. The controls can be instantly “dialed up” or down for either condition. Both produce ideal “white, fluffy” water, as powerful and dynamic as most any in-stream course can manage.

Achieving both conditions on the same course was proven possible at the 2012 London Games, where the Whitewater Kayak competition was staged. Since the 2012 event, civilians in London have gamely boarded their six-person rafts and wielded paddles to great effect – with a raft guide aboard, that is.

The accessibility of the urban U.K. course is introducing many people who probably would never otherwise get to experience the thrill of paddling whitewater.

The key is patented, modular features under and around the flow, designed by a serial Olympian and his one-of-a-kind company – an engineering firm staffed with Colorado engineers who grew up paddling the stuff, i.e., diehard devotees.

The wizard of the water 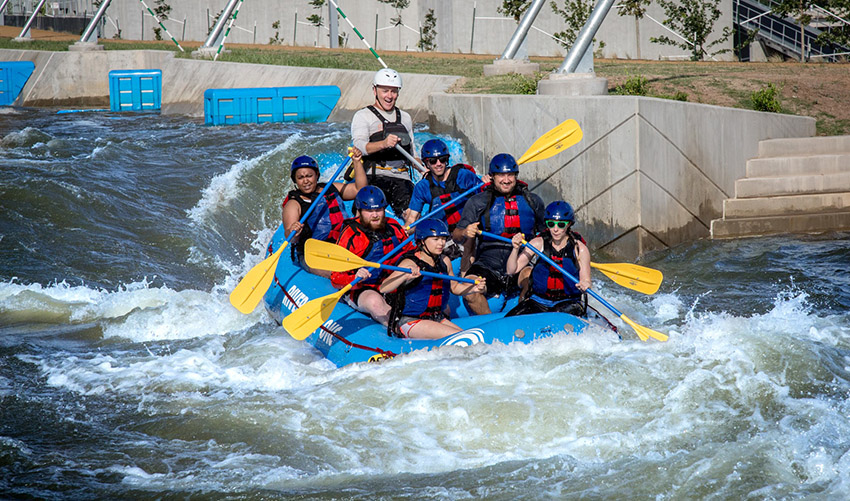 Scott Shipley is one of the world’s best-known American kayakers, a three-time Olympian and four-time World Champion. In addition to his trove of medals, he holds bachelor’s and master’s degrees in mechanical engineering from top-ranked Georgia Institute of Technology. He also earned the perspective of a whitewater competitor with 25 years’ experience in venues around the world.

Coming off the London test, Shipley was set to outdo himself in OKC, pushing the envelope unlike anyone else could. But he had a hard deadline: opening in time to host the U.S. Olympic Team Trials in May 2016.

The Whitewater Center was a collaboration between S2O and the Boathouse District architects, Elliott + Associates, as well as the City of OKC and its forward-looking citizens.

OKC's state-of-the-art RIVERSPORT rapids complex is one of only four in the world.

RIVERSPORT Rapids, as the sprawling course is called, is the first to feature three channels: recreational, competition and combined-flow freestyle.

As in London, the course puts the designer’s latest patented modular obstacle system to work, offering the ability to adjust course turbulence, so everyone rides the right amount of challenge.

Rafting here is a 60-minute experience. After rider orientation and gearing up, the action is nonstop. Because after a run, a conveyor belt carries paddlers back to the top to launch another round. In-stream riders typically spend considerable time making their way back to the top, watercraft in tow, to catch more rapids. So OKC’s course maximizes “rapids time” with a continuous experience.

A well-traveled guide is aboard every raft. They’re gregarious experts who’ve come from around the world to work in OKC. And they add to the entertainment.

In addition to rafting, riders have tubing and even surfing as options. It’s all thoroughly exciting for spectators, too, whether poised on pedestrian bridges or at the water’s edge.

Of course, there’s fun in the sheer audacity of the setting. People of all ages are riding the tumbling roar of a trademark Rocky Mountain sport in Oklahoma, of all places. Make that downtown Oklahoma City.

Paddlers find themselves flanked by a downtown skyline on one side and the serene river surface on the other, complete with the Zen-like rhythm of rowing teams, kayakers and “river surfers” enjoying SUP (short for stand-up paddleboarding). 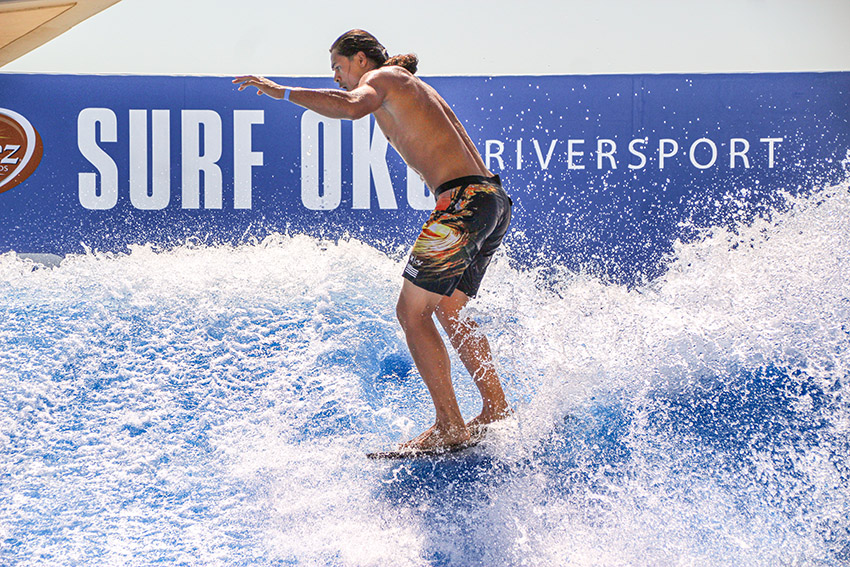 If Whitewater rafting isn't enough, you can now also catch waves on the Oklahoma River with Surf OKC. Launched in 2020, Surf OKC’s wave are created by using high volume pumps to generate a continuous sheet of flowing water approximately 2.5” inches thick over a specially designed soft riding surface. This stationary “sheet wave” rides like a similarly shaped ocean wave and can accommodate two surfers at a time.

Learn more about the past, present and future of the Oklahoma River by reading the full "A River's Rise to Olympic Rings".