Roots: at the river's edge 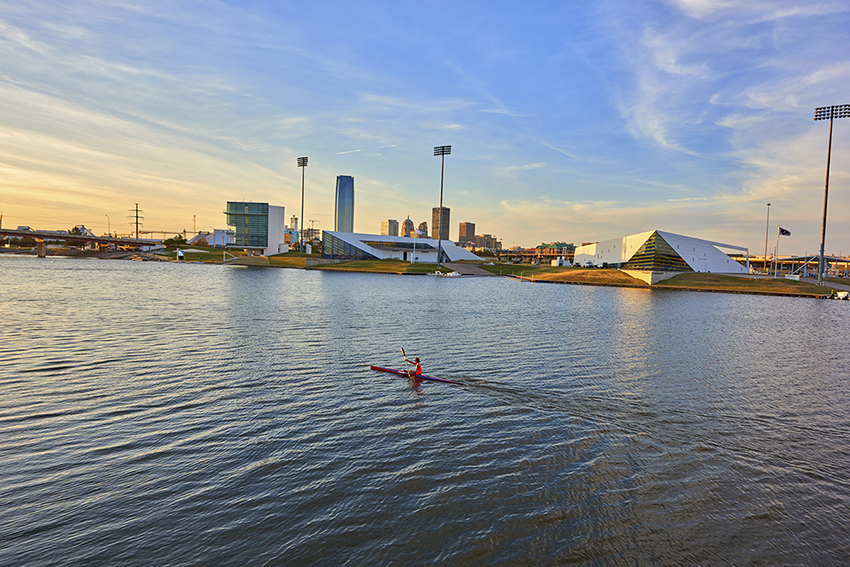 The Oklahoma Land Rush: Settlers at the River

Between high noon and nightfall, Oklahoma City was born in one helter-skelter spectacle of a race. A Land Run sent settlers bounding across the open prairie to claim a plot of land and a new life. By midnight, a tent city of 10,000 flickered under the stars.

It was April 22, 1889: The Land Run of ’89 into the Unassigned Lands of Oklahoma Territory made history. Destiny had arrived at a bend in the North Canadian River.

The New York Times sent a reporter to witness the Land Run of ’89, billed as the “biggest race ever run in the United States.” The reporter wrote a remarkable first-person account of the wild and wooly surge as staged from Purcell. The town lies 36 miles south of what became – later that day – OKC.

Little more than a decade after the Land Run, a grand entertainment complex had blossomed beside the river. It reflected a trend inspired by Coney Island, the famous resort/amusement park in Brooklyn (and before that, European parks dating back centuries). Evolving were ever-more-ambitious rides, starting with the ferris wheel, “circular swings” and the wooden coaster. And OKC would soon have all three.

Up-and-coming cities had begun building waterside amusement parks of their own, right down to the boardwalks. By 1900, Delmar Gardens graced the riverfront in a decade-old Oklahoma City, with every amenity of the day.

Early OKC’s opulent amusement complex, Delmar Gardens, had a short life (1902-1910), done in by the one-two punch of flooding and Prohibition. It was modeled after a park of the same name in St. Louis.

The sprawling Delmar Park hummed with a boggling array of grand entertainment, amusements and sport – from baseball and a boardwalk beer garden to a dance pavilion and horseracing. The era’s biggest stars lit up the stage in a 3,000-seat vaudeville and movie theater (with leather seats). Add a swimming pool, railway, a penny arcade, a hotel, restaurant and — giving the river an active role — a floating wedding chapel. 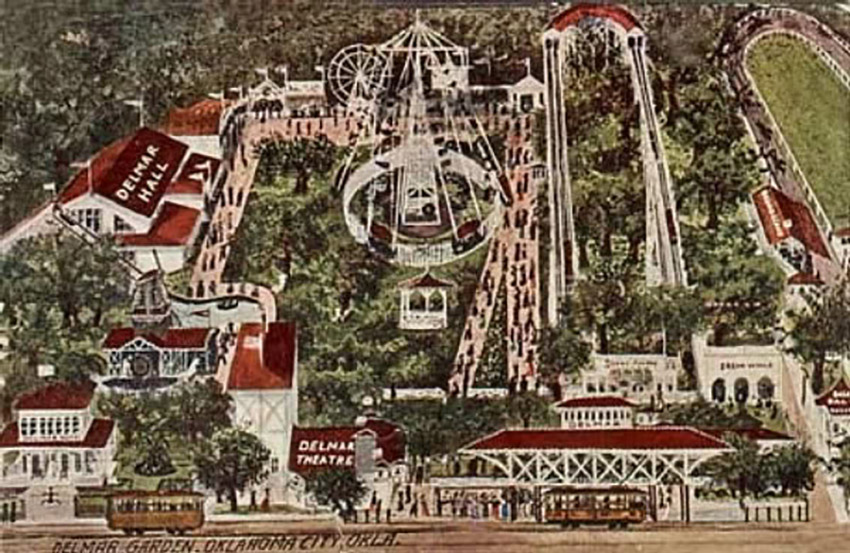 Delmar Gardens was an over-the-top attraction that, in its short lifetime, saw Oklahoma become a state and Oklahoma City as its capital. It remains a fond page of its past.

The town born at the water’s edge soon fell out of love with its river, or what had become of it. Flooding forced its abandonment. A decade after it opened, all that was Delmar Gardens was shuttered and residents moved to higher ground. Year to year, the river’s path shifted wildly.

So, in the 1940s and ‘50s, the U.S. Army Corps of Engineers was asked to corral it: Straighten its course and direct the flow elsewhere. The water, habitat and natural beauty were all lost in the transaction. For many years, this historic stretch of the North Canadian all but vanished.

For decades, city leaders dreamed of bringing life back to the dry riverbed. But no single constituency had much of a stake in it; everyone had learned to get along fine without it. Traffic passed over it, mostly ignored. An eyesore and a pity.

Even though the culprit was a man-made flood control measure, and not native landscape, it was painful to be confronted by the facts in Mark Klett’s photograph, pre-revitalization. And to outsiders, misleading. 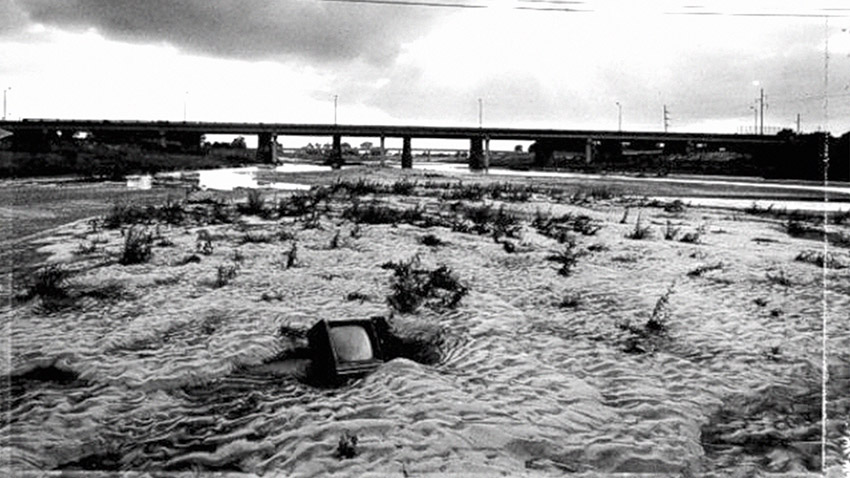 Maybe seeing the discarded TV in the haunting image of a river in ruins produced a kind of tipping point. In any case, soon it would be just a ghost of this “a scar through the city’s heart.” And may have helped put a miracle in motion.

The stars began to align for the river’s revival when the state’s 1989 Centennial seemed to awaken a frontier spirit of possibility. Believers in the river began to be heard. 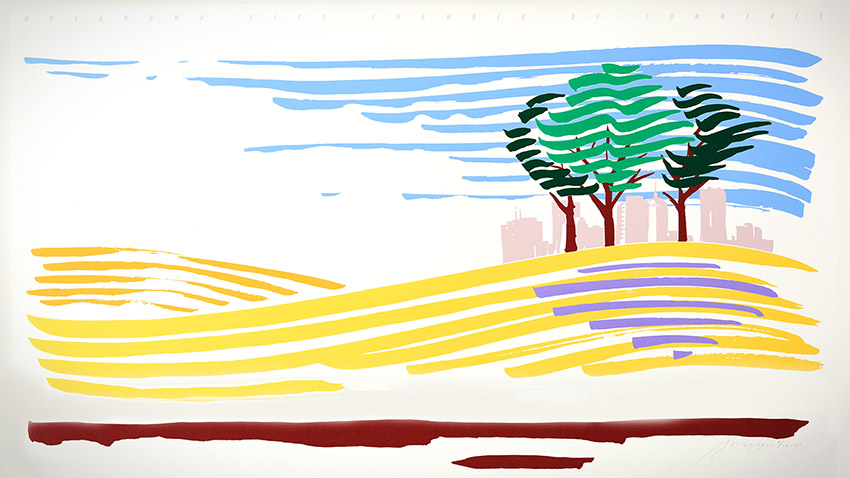 CENTENNIAL POSTER
This 1989 poster depicts the city’s founding and future on the North Canadian River. It was a romantic vision, grounded in faith the city would soon put water back in the river.

Seeds for an Olympic Movement in Oklahoma City had been planted in its hosting of the U.S. Olympic Festival in July 1989, and doing so with unprecedented success. The festival — held in non-Olympic years — served to bring the best American athletes together for Olympic-style competition. 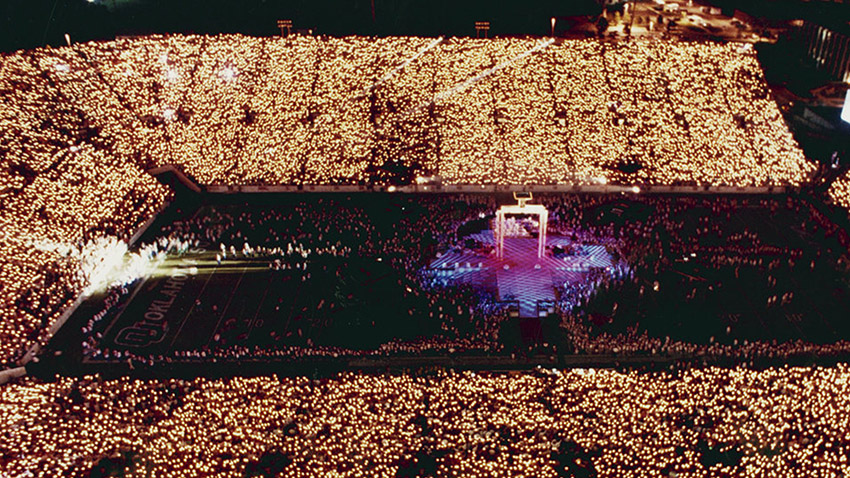 The more than 75,000 candles held by spectators for the Olympic Festival Opening Ceremonies light up Memorial Stadium on July 21, 1989. The Oklahoman photo by Steve Gooch.

The 13-day sensation was recognized as a triumph and turning point for the city. Its theme, “Winning a Place in the World,” was seen, 20 years, later as prophetic, given what has occurred since.

In 1989, OKC leaders knew the importance of making an impressive statement on the national stage. And they did.

By the early ‘90s, an oil bust had been weathered. But, facing competition for growth against cities where — it seemed — a better quality of life had been achieved, city leaders began assembling a wish list of projects that just might revitalize their inner city.

Much debate and many tough choices followed, but an inspired mosaic emerged: Nine aspirational projects that were diverse and exciting. The package, branded as MAPS (Metropolitan Area Projects), was an easy, public-friendly acronym for a tax initiative with a promise of empowerment.

It was December 1993. The citizens had the opportunity to reshape their city’s destiny.

Read the rest of A River's Rise.