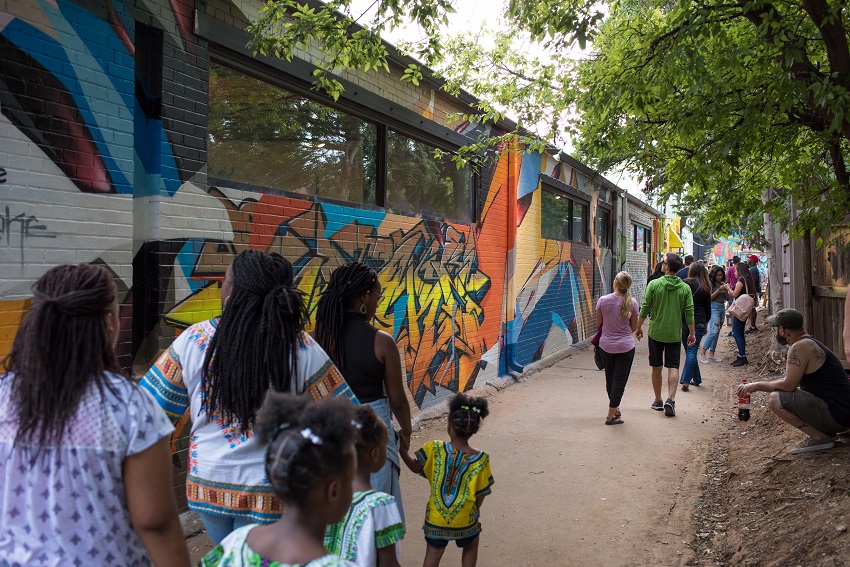 What does Oklahoma City have in common with London, Paris and New York? Would it surprise you to learn that all of these cities are committed to growing the synergies between the arts, food and music?

Civic and business leaders have figured out that arts and cultural investments make cities great places to live, learn, work and play.

National studies have proven that diverse cultural offerings instill a sense of pride and loyalty in residents, often resulting in faster-growing, positive economies. Investments in the arts make us more attractive for new business and industry.

Entertainment and tourism continue to be one of Oklahoma City's fastest-growing economies, and while there is much to celebrate around the visitor environment, life-long residents of OKC are finding new and exciting exhibits to see, music to hear and foods to eat daily across the city. And the world is slowly but surely finding out what we've known all along.

At a recent Chamber Forum, hard on the heels of Bon Appetite magazine naming OKC’s Nonesuch restaurant the best new restaurant in the country, a panel of experts, representing Oklahoma City’s arts, food and music scene, brought an audience of more than one hundred business leaders up to speed on the latest developments and why the business community should care.

“Nonesuch, that's a huge success story for our town, for our city, for our state, for our industry to have these two, three, four chefs stay in town and do what they're doing for all of you, all of us, that's great,” said Keith Paul, CEO of A Good Egg Dining Group.

“Cuisine has changed a ton and there's a lot to really point to, to say what helped that change. Everyone watches the Food Network or has watched cooking shows or these famous chefs and celebrity chefs. And so a lot of that being more in the public eye has done a ton to educate everyone in this room, including myself. It's like we've learned about foie gras and different beans and different sauces and chilies and what to do with those,” he added.

That interest in the cooking shows and the willingness to try new things has allowed chefs that are younger or new to the business, even those who have been around awhile, become more creative.

“Once the public was more educated and more familiar with these items, the chefs started really changing their focus and kind of taking a lot of a lot of risks when it comes to cuisines, so it's been fun to watch that. But it's still changing. There's still a lot of people staying in town, not moving to Chicago and LA and New York and Kansas City and they're staying here and they're cooking,” Paul explained.

But there’s more “taste” in OKC than just the food. Art in the workplace has become a “thing,” all around the world, and OKC is right there, toe-to-toe with other cities.

Art is being used to recruit and retain employees. Who knew?

“There was just recently a Forbes article about art in the workplace and how even the designers, architects and engineers are trying to figure out how to incorporate it more,” said Deborah Senner, president & CEO of Allied Arts OKC. “Murals to entice the tenant and then the tenants would entice the creative type of people that they want to have to work there. Because I think they discovered that just having a gymnasium is not going to cut it anymore.”

This hasn’t just happened by accident, either.

“We have a cultural liaison that has set up the processes for that to be successful for our city,” Senner explained. “We know it's successful when we were mentioned by major bloggers that had been here, Camels and Chocolate, and they were talking about from the second you set foot into Will Rogers World Airport, you get the vibe of the city from the artwork, the murals and the colors there. And then they did a tour of the city and they began just outlining where all of our amazing murals are and they just said ‘this is one of the many things that makes us love Oklahoma City.’ I think we're just fortunate that we're in a city that dedicates a percent for art so all of the new construction, certainly with a new Convention Center, will have dedicated dollars for the artwork.”

“In the past, with music, we just exported it,” according to Scott Booker, CEO & executive director of the Academy of Contemporary Music at the University of Central Oklahoma. “I'm seeing a shift where there's now an entrepreneurial attitude about music and art and staying here and creating tons of businesses that are not only the bands, but the artists that themselves are entrepreneurial.”

Wait. What? A band is entrepreneurial?

“If you think about it, being a band is incredibly entrepreneurial,” he added. “You're creating a product and you're hoping that people pay you for it and hope you make enough money for your business to thrive and survive. I think that's a big shift here, with music and arts. Not just thinking of it as a consumer, but also that we treat it as a business and a commodity.”

And why is it important that businesses support the arts? Senner had this answer.