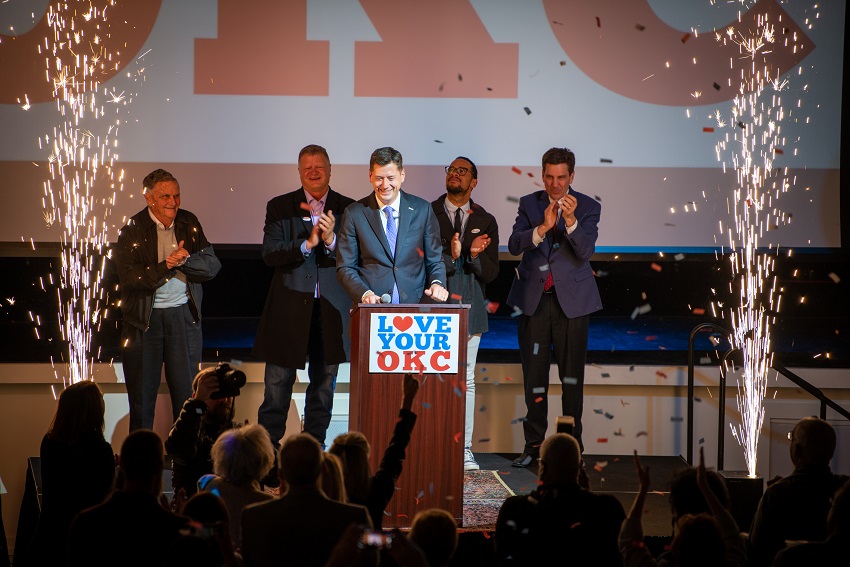 Oklahoma City’s voters delivered a message at the polls on Dec. 10, a message that will keep the 20-plus year momentum of OKC’s reinvention rolling forward, as the latest installment of a penny sales tax for strategic investment passed by a landslide. The city’s MAPS 4 package received 71.7 percent of the vote, making it the most popular of all MAPS votes.

“We’ve never been this united on a sales tax vote before,” Oklahoma City Mayor David Holt said at a watch party hosted by the Love Your OKC coalition. “None of them have hit 70 percent.”

The nearly $1 billion package — which will fund a new outdoor arena, a new State Fairgrounds coliseum and improvements to the Chesapeake Energy Arena — received broad bipartisan support from OKC politicians.

But MAPS 4 may end up being known for much more than its city-central sports venue projects. Referred to as a “MAPS for neighborhoods” by Holt prior to the election, MAPS 4 features hundreds of millions of dollars for parks, youth centers, mental health care and other social services aimed at improving quality of life in a different way.

The original MAPS passed in 1993 with 54.6 percent support. In 2001, voters extended the MAPS tax for a slew of school construction projects under the MAPS for Kids branding. More than $470 million was poured into 70 new and reconstructed schools across the city. MAPS for Kids received 61 percent support at the ballot box.

In 2008, voters approved a 12-month extension of the MAPS tax specifically for improvements to the sports arena in anticipation of the Seattle Supersonics’ relocation to Oklahoma City. The measure received 62 percent support from voters.

In 2009, voters approved MAPS 3, which featured funding for a new convention center, Scissortail Park, the OKC Streetcar, a set of senior centers, riversport developments, trails, sidewalks and other infrastructure investments. The package passed with 54.3 percent support.

“Tonight we have the largest percentage of support in the history of Oklahoma City,” Holt told those who gathered at the watch party. “This is not just a victory. This is a mandate without historic precedent in our city. We have never been more united as one OKC.”

The 1-cent sales tax will be used to fund 16 civic projects estimated to cost nearly $978 million. The tax covers an eight-year span, with a possibility additional funds could be collected in that time. The projects are not built until the money is raised, so every development is constructed debt-free.

Without the support of Oklahoma City’s business leaders and employees, passage of the measure would have been very much in doubt.

Greater Oklahoma City Chamber President and CEO Roy Williams said the Chamber was pleased to see that residents understood the necessity of these projects and voted to help their neighbors.

“While all the MAPS initiatives have improved our city, MAPS 4 will propel our city to the next level and continue the momentum that has helped us become a destination for top-quality employers and visitors as well,” said Williams. “As the city continues to reinvent itself, we need to be able to take care of our neighbors, and this MAPS will address those concerns.”

The MAPS 4 tax will replace the Better Streets, Safer City temporary tax, which is set to expire at the end of March. Since MAPS 4 will be taxed at the same rate, consumers will see no change in taxes at the register. Only the use of the funds collected by the 1-cent portion of sales taxes will change, starting April 1.

“I cannot thank the voters of Oklahoma City enough for this amazing trust that you’ve put in the city,” Holt said in a video posted to social media. “We will now go forward and implement this MAPS 4 plan and continue this city’s renaissance.”