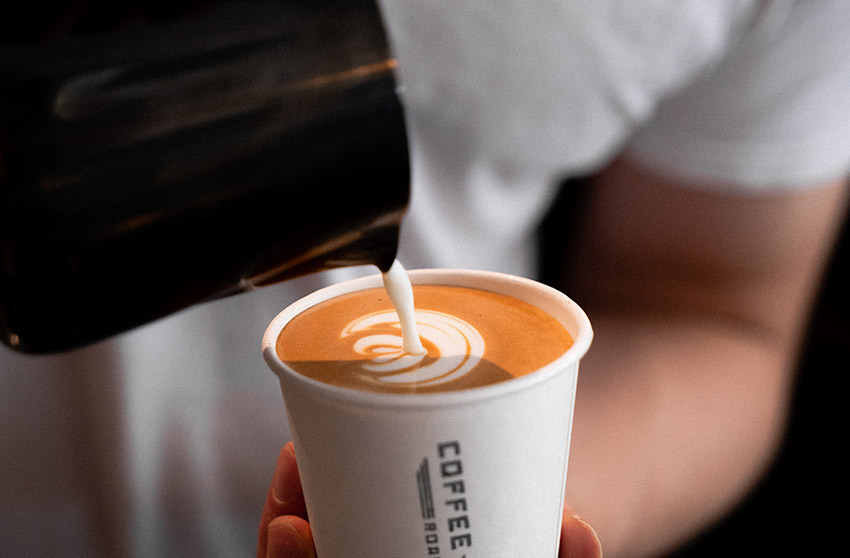 That’s right, fellow caffeine fiends – it’s National Coffee Day. While we’ve previously told you about ways that you can use the streetcar to have the type of day out visiting downtown coffee shops that can probably most charitably be described as “restive,” we wanted to bring your attention to some of our favorite Chamber members from whence you can source a cup of joe, as well as spotlight the  growth of our local roasting industry and those that turn the world’s favorite green bean into what many of us might refer to as our “dark master” (but hey, it’s good for you, right?).

The OKC coffee scene has proliferated of late, with plenty of local and national options all over the metro. Some of our favorites include Chamber members like Stella Nova Crafted + Coffee (in fact, you’d find the downtown location is effectively a second office for many Chamber and CVB staffers), Kamp’s 1910 Café, Higher Grounds Coffee Shoppe & Bakery, The Lobby Café & Bar, Kitchen 324, Café 110, Scooter’s Coffee, and Panera Bread. Need coffee service for your office? Check out members like firstCHOICE Coffee Services and Imperial Company.

In case you’re wondering, the U.S. imported the second-largest amount of coffee beans in the world behind the European Union, according to the FDA (so yell at them if you want individual European country stats; frankly, we’d be curious about that as well) at 27.0 million bags forecasted this fiscal year. A “bag” in this case weighs 130 pounds, so it’s a little bigger than the sack you get from your favorite local roaster. According to the U.S. Census, the U.S. imported more than $4.6 billion in coffee beans in 2019 (not much coffee is produced in the U.S., though Hawaii exported $9 million in coffee last year [proud ‘o ya, Hawaii] and there are smaller operations in California and Puerto Rico).

In addition to shops, many places roast their own beans and there are some dedicated roasting operations here in OKC producing world-class java. Some of those include Prelude Coffee Roasters, Coffee Slingers, Leap Coffee Roasters, Eôté, KLLR Coffee, Zero Tolerance, Elemental Coffee, and Sincerely Coffee Roasters. We’re probably missing some of our local roasting operations in this list, so if you know one we need to include, let us know! And if you're a coffee person like the author, get acquainted with our local coffee roasting cadre - you won't be sorry.

“Legend ties the discovery of coffee to a centuries-old monastery in the Ethiopian highlands, and after its introduction on the Arabian Peninsula, coffee was actively cultivated and traded before gaining popularity in Europe.

“Between coffee houses and home, coffee lovers now consume more than 2.25 billion cups a day. Coffee counts among the most valuable tropical export crops on Earth, cultivated across more than 27 million acres. Small-scale farmers produce about 70 percent of the world’s coffee, and as many as 120 million people depend directly or indirectly on coffee production for their economic survival.”

All this coffee talk got you thinking of opening up your own shop and/or roastery? You’ll likely need a coffee roasting machine, and luckily, U.S. Roaster Corp. is located right here in OKC and can help you out with all your roasting machine needs and other stuff you may desire for the perfect cup of java (or chocolate!), like industrial-size grinders, destoners (sorry, card-carriers), afterburners and more. They even make an extremely energy-efficient roaster that recirculates heat in such a way that no afterburner is necessary (sorry, Maverick) and basically pays for itself in saved energy costs. Check ‘em out!