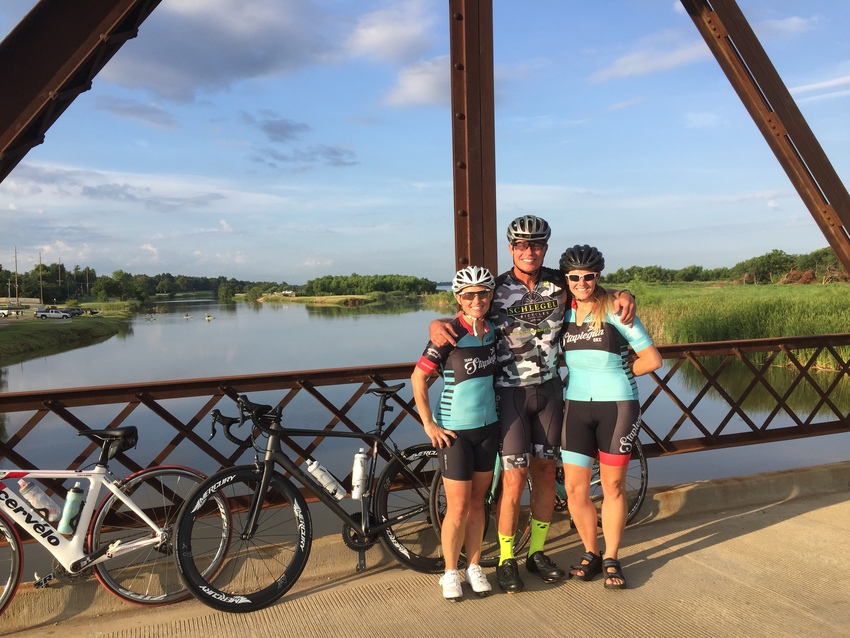 With major investments in the city’s expansive trail system, an enthusiastic cycling community and just about any kind of terrain you could want within a short ride or drive, Oklahoma City is an under-the-radar city for great cycling.

In honor of Friday’s Bike to Work Day, we sat down with Tammy Fate, senior manager of retail development for the Greater Oklahoma City Chamber, to talk cycling in OKC. Fate is a cycling enthusiast who moved to Oklahoma City five years ago and knows as well as anyone how to get involved with the metro’s cycling community.

VeloCity: How did you start getting involved in cycling?

Fate: Back in my early 20's, I worked at the Tulsa Chamber and I walked past this lady and she had this map of the Freewheel Training Ride. I just had this clunker bike and I didn't ask how many miles we were going. I didn't even ask about elevation. I just thought, "I'm 20 something and I can hang with these people, right?" So I show up, by far the youngest person there, and everybody has these really nice high-end bikes and I'm like, "Well, I can keep up with them, you know, no big deal," and it was terrifying. I ended up getting pushed up a hill by a guy who was in his 60s and I wanted to cry. My legs hurt so bad that I wasn't sure I was going be able to walk up the stairs, but the people were so nice, welcoming and friendly. Honestly, I wanted to figure out what made them love this sport so much. And from then on, it's just been non-stop.

Once you moved to Oklahoma City, how was it getting ingrained in our cycling community?

Well, it's different [for me] because it took me a while to really get connected because I would go ride by myself. So for the first two years that I lived here, I didn't connect with anybody. When I finally did show up to events, everybody was super nice and welcoming and encouraging. My biggest regret was not getting involved with the groups sooner. I started riding with different people, and now there's a ride going on every single night. And I have a hard time deciding, "do I want to do this ride or that ride?"

"There is something for everyone. You'll meet somebody on every ride because you're not going to be out there by yourself."

You’ve touched on it a little but how would you describe the cycling community in Oklahoma City?

The community here is very welcoming, friendly and inviting--basically a support group that feels like family. There is a lot of camaraderie and people genuinely trying to create an experience. When you spend a hundred miles on a ride with somebody, you get to know a lot about them. And, I can honestly say, I've never met a cyclist I didn't like. 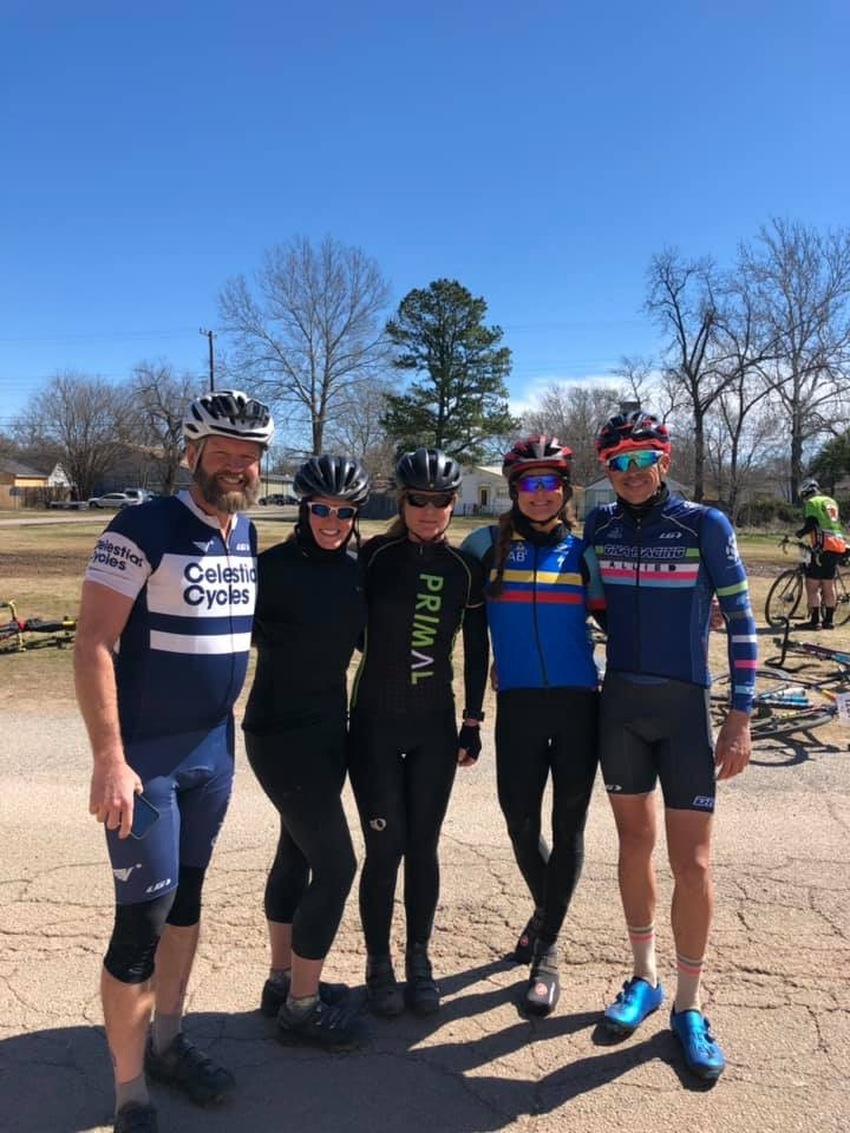 What makes our city unique for cyclists?

In a lot of places, cycling is only [a possibility] for a few months because of weather and seasonality, but because our winters are pretty mild, we can ride outdoors all winter long. Also, here there is every type of group imaginable and there are a lot of local bike shops that host rides all the time, and they're pretty encouraging. Every night there's something going on.

"There is a lot of camaraderie and people genuinely trying to create an experience."

What are some of your favorite races to participate in?

I just did the Flower Power in Muskogee, and it goes to the foothills of the Ozarks and it's stunning. It's a bunch of old country roads, wooden bridges... it's definitely delightful. Land Run in Stillwater is special. Stillwater has created a unique atmosphere and an ambiance where people in Colorado will even talk about it. 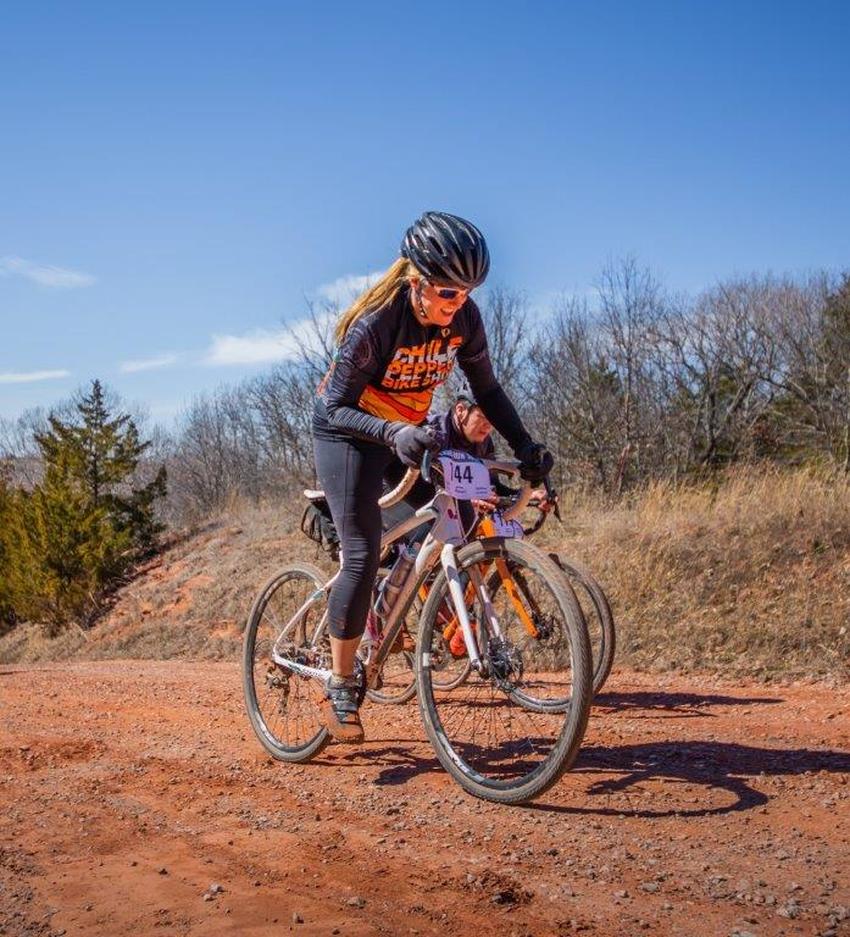 What are your recommendations for a causal ride?

I love riding out at Lake Draper. It is beautiful with rolling hills and a change in topography. Lake Overholser and Hefner are great too. We have a really dynamic trail system here. El Reno is a fun and easy place to go ride. You get on Foreman Road and grab a burger at the famous Sid’s.

What kind of advice would you give somebody who wants to get involved with cycling in OKC?

Just show up. Look at the different paces, because there is a ride every night of the week. There is a ride on Monday nights called "Pizzeria Gusto," and it's a super casual ride where nobody is left behind. If you want to go crazy fast there's one called "Wednesday's World." It goes 20 miles an hour. And then there is a "Big Truck Taco Ride." If you want to go eat chips and salsa and have tacos and do a recovery ride, do that. There's a "Donut Ride." There is something for everyone. You'll meet somebody on every ride because you're not going to be out there by yourself. Somebody will talk to you, guaranteed, or something will happen where you'll be like, "wow, this person is about the same pace as mine."

If you want to get involved in the local cycling scene, a great place to start is at a local bicycle shop like Al’s Bicycles, Schlegel Bicycles or Celestial Cycles. After that, grab your bike and we will see you Friday for Bike to Work Day.