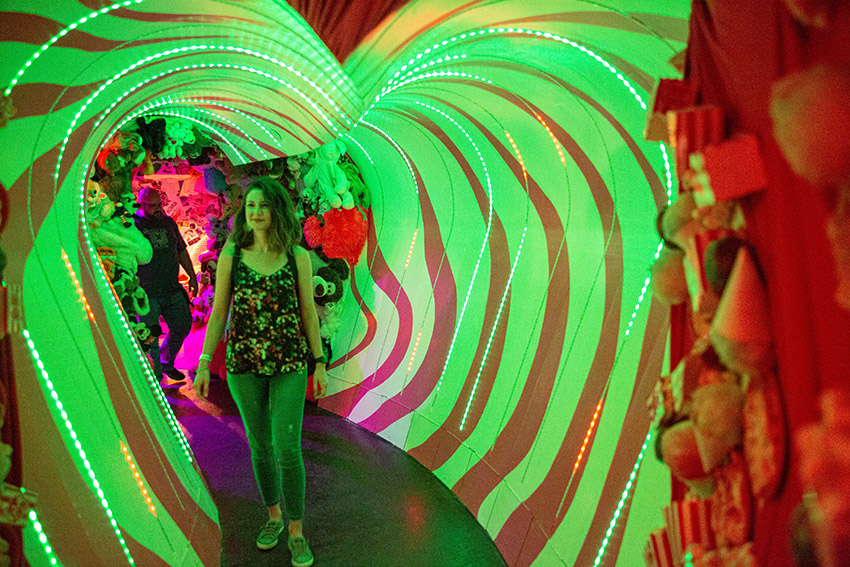 A woman walks through the heart-shaped tunnel at Factory Obscura's Mix-Tape, Phase 2, located in The Womb, 25 NW Ninth St.

Back when recording multiple songs on a cassette tape was popular, the tapes would often evoke a range of emotions for the listener, from happiness to sorrow to melancholy.

Those emotions and others have been artistically interpreted by more than two dozen local artists, who displayed those feelings at Factory Obscura's second phase of its immersive art experience, Mix-Tape. The attraction opened Saturday at The Womb, 25 NW Ninth St.

The Womb was started by The Flaming Lips' lead singer Wayne Coyne as an experimental art space. When Mix-Tape phase one opened in March, the band's immersive head trip experience known as The King’s Mouth was featured in the Mix-Tape lobby through Aug. 25 and could be viewed for free.

In phase 2, there's more to see in the building. The 6,000-square-foot indoor interactive attraction was brought to life by 25 artists who were paid for their full-time and part-time work. Paying the artists was an important part of the experience for co-founders Tammy Greenman, Kelsey Karper, Laura Massenat, Laurent Massenat and Hugh Meade. There were also dozens of volunteers who helped created Mixed-Tape. 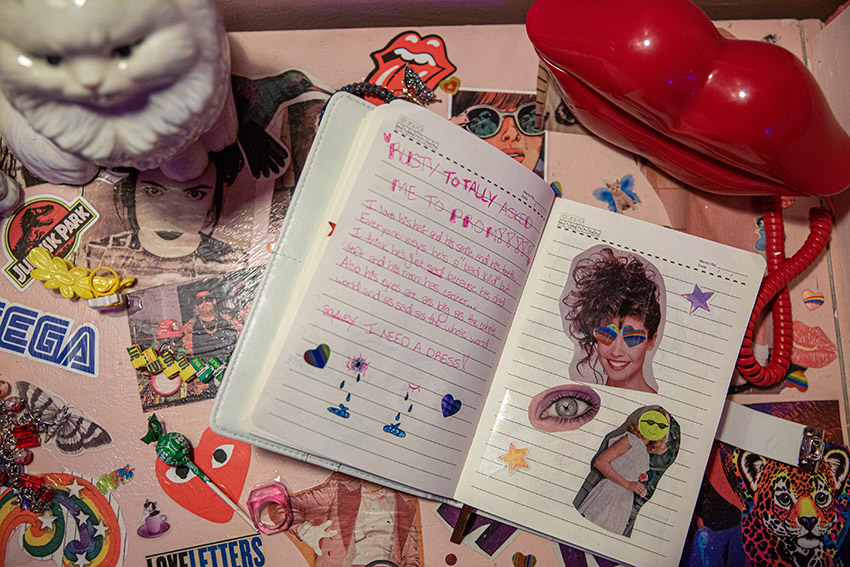 Part of the immersive art exhibit, Mix-Tape, shows a look at teenage love.

From walls, stairs, and passageways to sculptures, dioramas, and embellishments, Factory Obscura artists have designed, constructed, fabricated, and installed every element with their own hands. The team includes carpenters and welders, sculptors, visual artists, textile artists, poets, filmmakers, musicians, dancers, and designers, as well as a full tech team made up of electronic, light, sound, and projection artists.

The current space is only the beginning of what Factory Obscura plans to do at The Womb, said Karper. She said it's a year-round experience that will evolve. It can also be used as an event space.

Developer Steve Mason and his partners at Mason Realty Investors made a strategic investment in the experience. Mason renovated and owns several other buildings on Ninth Street, including the homes of Iguana Mexican Grill, Nashbird, and Katiebug's Sips and Sweets.

Mason said having a place like Mix-Tape is important in the grand scheme of community building. People need a place to have experiences.

"Mix-Tape is a very very good example of experience building," he said.

The Womb has also become a place where friendships have formed as the artists worked on Mix-Tape, Mason said.

"They've built a strong community of friends," he said. "That's been an unexpected and wonderful outcome. These people love spending time together and making great art together. Instead of working in isolation, like many artists do, they're a community over there."

Tickets for Mix-Tape, Phase 2, can be purchased for each trip or people can buy an annual pass. There's passes for families as well.

Karper said Factory Obscura is still looking for a 50,000-square-foot space to have a permanent arts destination. Besides the immersive art exhibit, the space would have interactive gardens, artist workshops, an event space, education and other community and creative spaces that are critical to the world that is envisioned by the Factory Obscura team.

This isn’t just about art,” said Greenman. “It’s about radical collaboration and community-building. It’s about coming together to make something bigger than ourselves. It’s about arts education and healthy kids. It’s about thriving-wage jobs for artists and artisans. It’s about creating an environment where folks can take risks and experiment and do all the things to make this awesome city more awesome."