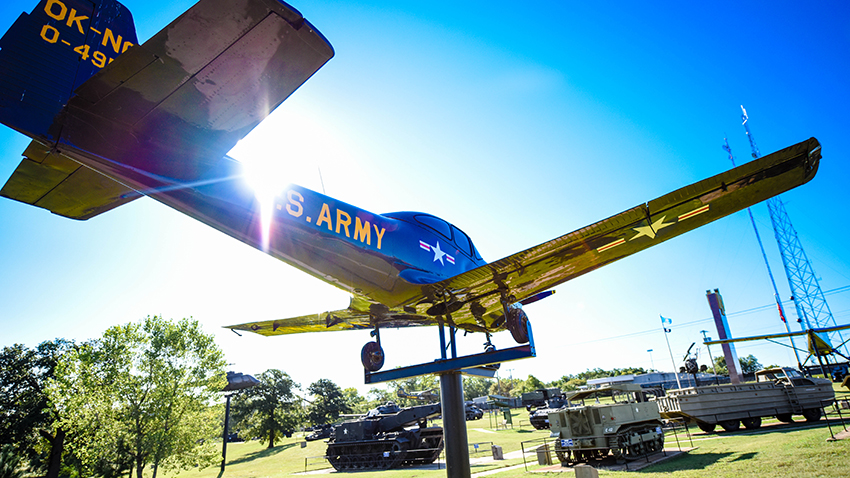 Following World War I, the National Defense Act of 1920 created the authority to form the 45th Infantry Division from the four states of Oklahoma, Colorado, Arizona and New Mexico. The division was organized in 1923, and Oklahoma members camped together for the first time at Fort Sill, Okla., in 1924.

The Thunderbirds trained at Fort Sill; Camp Barkeley, Texas; Fort Devens, Mass.; Pine Camp, N.Y.; and Camp Pickett, Va. They had trained hard for their part in World War II, and on July 10, 1943 the division participated in their first of four amphibious landings. In all the division served 511 days in combat; fighting their way across Sicily, other parts of Italy, France and Germany. The National Guard Division of the southwest became highly regarded by both regular army forces and the enemy for their valiant efforts and fighting abilities.

The 45th Infantry Division served with General George S. Patton’s U.S. 7th Army during the Sicilian campaign, and when the fighting was done, the commander said about the division, “Your division is one of the best, if not the best division in the history of American arms.”

The museum features numerous artifacts from the unit’s earliest days, a collection of Bill Mauldin cartoons, and also features a 15 acre park with tanks, artillery, personnel carriers, aircraft and the Thunderbird Monument. The monument pays tribute to the men and women who served with the 45th during WWII and the Korean conflict, as well as those who continue to serve in Oklahoma’s National Guard.