How to get involved in rowing 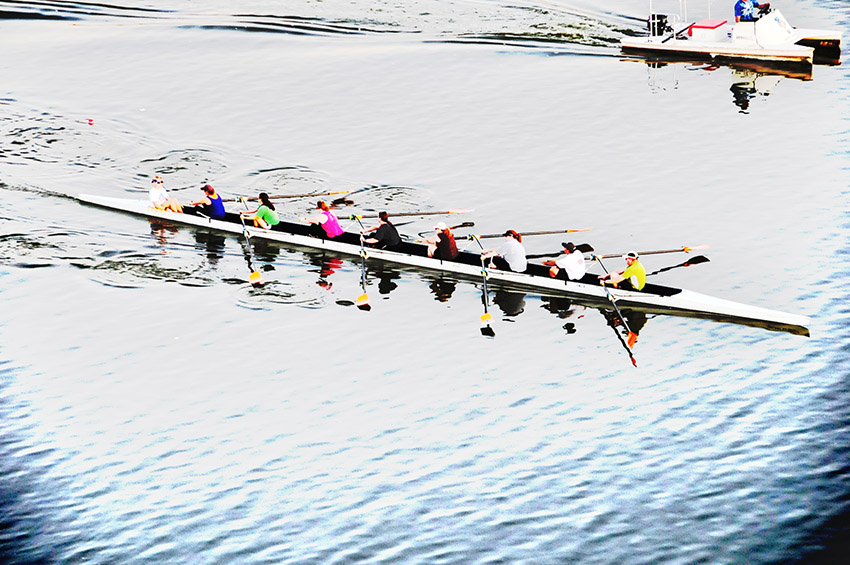 Company rivalries will move from the boardroom to the water as the corporate rowing league resumes July 15 at the Oklahoma City Boathouse District.

The fall season culminates on Oct. 4 with the OG&E Night Sprints, held at the Regatta Festival. The spring season ends with its competition being held at the Stars & Stripes River Festival.

The corporate rowing challenge has been held in the city for over a decade, said Melanie Borger, OKC Boathouse Foundation Athletic Programs Director. At the competitions, teams are divided based on their skill level, from a group for new beginners to experts.

People don’t need to be in top shape to participate. It’s a low-impact exercise, so people can sit down and still get a full-body workout.

“With rowing, there’s this technical and equipment learning curve,” Borger said. “A participant’s fitness will increase as they learn the technique.”

It takes eight rowers to fill a boat, but she suggested having at least 10 people on a corporate team so there are back-up rowers if needed. There are 35 teams in the league, which includes all three seasons. Borger said the participation seems to ebb and flow with the economy. The healthcare industry is currently best represented, but there are teams from the energy industry, banks and law firms.  Any company or group of friends is welcome to participate.

Participants are taught rowing basics in the 12-week training time. There were teams that started in March where the entire crew was new to the sport. Other teams have been rowing together for more than 10 years.

Borger observed that the corporate rowing challenge is a good way to build company comradery, especially given the nature of the sports itself.

“In rowing, the goal is for everyone to do the exact same thing at the exact same time,” she said. “It’s a really good metaphor for the workplace in the sense that no one is more important than the other. We have teams where the CFO is rowing next to the receptionist.”

If a goup is interested in learning more about the Corporate Rowing League, contact Melanie at mborger@okcbf.org. Teams can sign up through the end of July.

Getting into rowing without a team

For people who have always wanted to give rowing a try, Riversport offers Discover Rowing class for $35. The two-hour class teaches the rowing stroke basics and other introductory information.

If that class piques someone’s interest, the next level is Learn to Row, which is offered monthly from May to October. The $175 month-long class meets twice a week. Participants learn rowing techniques, safety rules, and how to handle the boat well enough that they could consider joining a team or venturing onto the river during open rowing sessions.

“The second most-common misconception about rowing is that people learn it’s not just about strength, it’s about skill,” she said. “It’s a great overall fitness for adults, even those who thought they couldn’t get into sports again.”

Borger said that unlike kayaking, rowing does require some training, such as a class, before people can rent boats at the Boathouse District.

After taking Learn to Row, the participant is qualified to compete in the Masters Coached League. To be in that league, people pay $110 a month, which includes boat rentals and access to the Riversport attractions, equaling to a Riversport season pass. The monthly fee also gives the athlete access to training equipment and admission into local regattas.

From Oklahoma City, eight Masters League athletes will head to Michigan in August for the USRowing Masters National Championships.

“I think people love being out on the water,” she said. “It’s a calmness and a connection that you don’t get from being in the gym, or on the land running or biking. There’s just something about being on the water.”