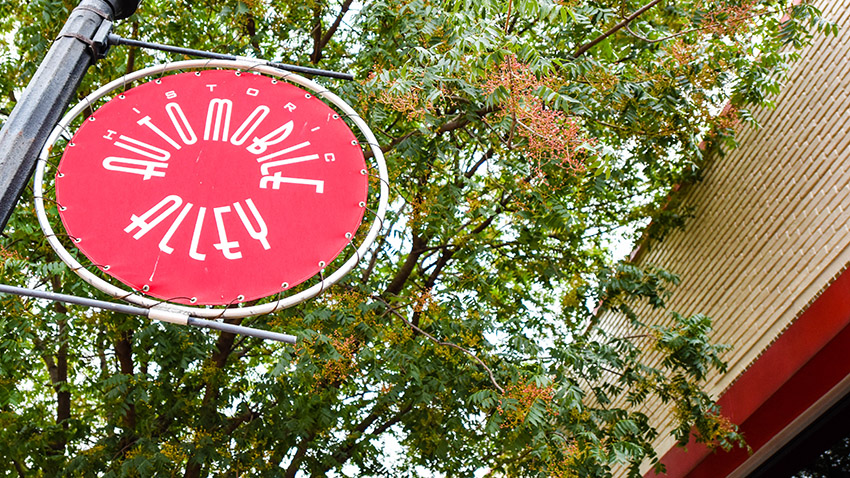 The Automobile Alley District is opening the doors to a new art exhibit.

Alley doors around the historic district will soon be adorned with art pieces, bringing color and whimsy to an area often traveled by pedestrians.

The 21-door exhibit is backed by the district’s business improvement fund.  Downtown Oklahoma City Partnership is overseeing the project.

“This project allowed us to focus on commercial designers and graphic designers, which we often don’t get to work with,” said Kristen Vails, placemaking director for DOKC. “DOKC Partnership has done so many projects with mural artists, it was cool to focus on the design community.” 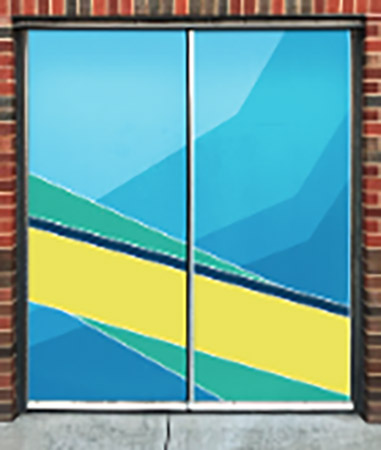 DOKC is sending the images to Lettering Express, which will put the art onto the doors. Lettering Express CEO Charlie Trujillo said his team went out early in the project to check out all the doors and figure out the best material to use. The 480 series from 3M was the best option, he said, because it wouldn’t be hard to install and could easily be removed. The company used the same material to wrap Oklahoma Shirt Company’s building. With the 21 doors in Automobile Alley, Trujillo said he thinks it will only take a couple days to get all the pieces installed.

“I’m excited. I love these projects,” he said. “One of the fun things about working at Lettering Express is we get to see our work all over the city. We often come back to the office and share with each other, ‘I saw that thing we did,’ so we get to feel like a B-list celebrity.” 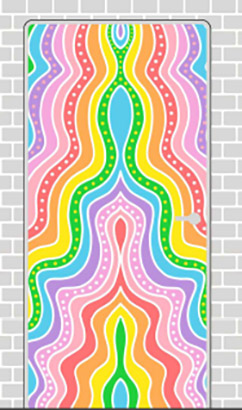 Tiffany McKnight created one of the pieces that Trujillo and his team will install. With her background in printmaking and graphic design, and her ongoing work in vector design, she was thrilled to get to bring more of her colorful work to the district. She’s also one of the artists at Factory Obscura.

She loves color, so her print features a pulsating image of bright hues. Her image was inspired by brain waves and she said she’s hoping that the piece will put out an energy that people interact with. She said she’s looking forward to it becoming a popular photo backdrop once it’s installed.

“What I think is great about the door tour is it’s creating a way to give people the joy of finding art in places that you least expect,” she said. “It’s a really great opportunity to expand what public art can be and look like in Oklahoma City.”

McKnight’s piece will be one on of the doors owned by Midtown Renaissance. The development group’s Chris Fleming is familiar with watching people discover art. He’s seen people notice the staircase hanging between the parking garage and the Buick building on NW 10th Street. They’ll often stop and take a picture of it.

“(The staircase) is a fun little surprise to someone who’s paying attention, which these doors will be as well,” he said.

He was able to give his preferences for the three doors on Midtown Renaissance’s buildings at NW 10th and Broadway Avenue, which are the furthest north the project will go.

He said one of his preferences was an image with a cat, thinking of his kids and other children that might be looking for the art.

“Once the art is installed, I hope it gets people out to reengage in the district, in a socially distant way,” he said. “I think seeking out these pieces will break the ice for people who have been less prone to come out of their houses.”

Sarah Allen's piece for the exhibition

Photographer Sarah Allen, from Tulsa, was surprised to find out her work would be on the doors. She attended the Oklahoma Summer Arts Institute at Quartz Mountain as a high school senior in 2015. OAI submitted one of her photographs for the door project. OAI has its offices in Automobile Alley.

The black-and-white photograph features a woman in water. She took the picture with a Go-Pro camera. She said she’s looking forward to seeing the image installed.

“It’s going to be amazing,” she said. “It’s very surreal and very humbling.”

Building owner and Automobile Alley tenant Meg Salyer said she’s seen how successful art can be in the district’s alleys. Last year, DOKC installed large flower arrangements in the alleys and at the OKC Streetcar stop and there were pictures of the installations all over social media.

She said she uses the alleys frequently as she goes from her office to the Central Business District.

For her building, she was strategic about listing her image preferences. She asked for the piece by Bryan Boone because it matched her company colors.

She said she’s pleased that DOKC was able to make this project come to life so quickly.

“I am so grateful for the creativity that’s going on at DOKC Partnership and the Initiatives organization,” she said. “The overused word of the century is ‘pivot,’ but they’ve been able to come up with great ideas to brighten up and engage the community in public art in ways we haven’t thought of before.”