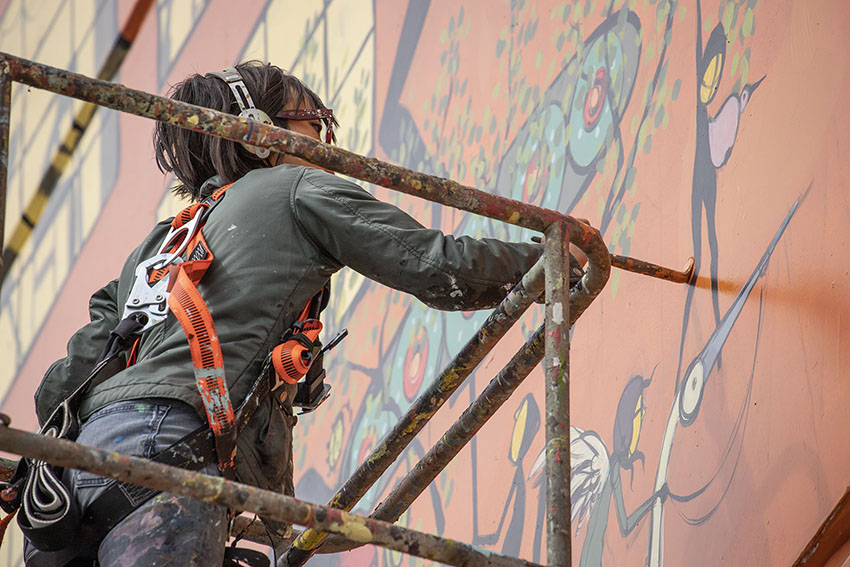 Editor's note: As part of our recent multimedia feature on OKC's arts community, we profiled a few artists making waves here in Oklahoma City. We hope this piece on Denise Duong and other upcoming related posts will whet your appetite to check out the "Visual Arts in OKC" feature story on greateroklahomacity.com and share it with family, friends, neighbors and potential residents/investors.

Denise Duong’s work is filled with mesmerizing, whimsical, slightly otherworldly people and creatures who are connected by flights of fancy, tendrils of hair becoming waves of water, bicycle wheels spinning into Ferris wheels, flowering vines lacing them all together. Figures often appear in silhouette or profile, with large, childlike heads. Large sunglasses. Victrolas and old-fashioned motorcycles dot her landscapes.

At first, though, it was bears. As a child, Oklahoma City muralist and painter Denise Duong knew two things for sure. She wanted to be an artist and she loved bears. She drew packs of them, over and over. Their familiar form captivated her, plus there was Annie. That was the name of Duong’s favorite stuffed bear when she was a little girl. Annie, her constant companion and muse, whom she loved with the sweet fervor only a child with an imaginary friend can muster. Annie, whose form she knew by heart. Annie, who she later learned was actually…a raccoon.

It was a shock, to be sure. “It was the tail that gave her away,” Duong says, laughing. Maybe thanks to Annie’s years of hiding in plain sight, Duong’s art is full of little secrets. Take a minute to look and little birds start to appear, or a woman’s hair might also be a cloud.

Shown regularly at JRB Gallery and her own Little D Gallery in the Paseo Arts District, her imagery was described in a recent exhibition catalogue as showing ‘the inevitability of change at an adaptable, inviting, and human scale, as we journey with her characters through their poignantly cartoon-like escapades. In some we see her dog, a charming white bull terrier, anthropomorphized as only a dog lover could do – at once comic and gentlemanly. In other works, the depiction of social relationships belies Duong’s deep grasp of the human psyche – the daily interactions of two people in love, out of love, on a bike ride, doing business or caught in a windstorm. Like Shel Silverstein and Edward Gorey, Denise is able to provide human comfort in charming caricature.’

All of that rings true. 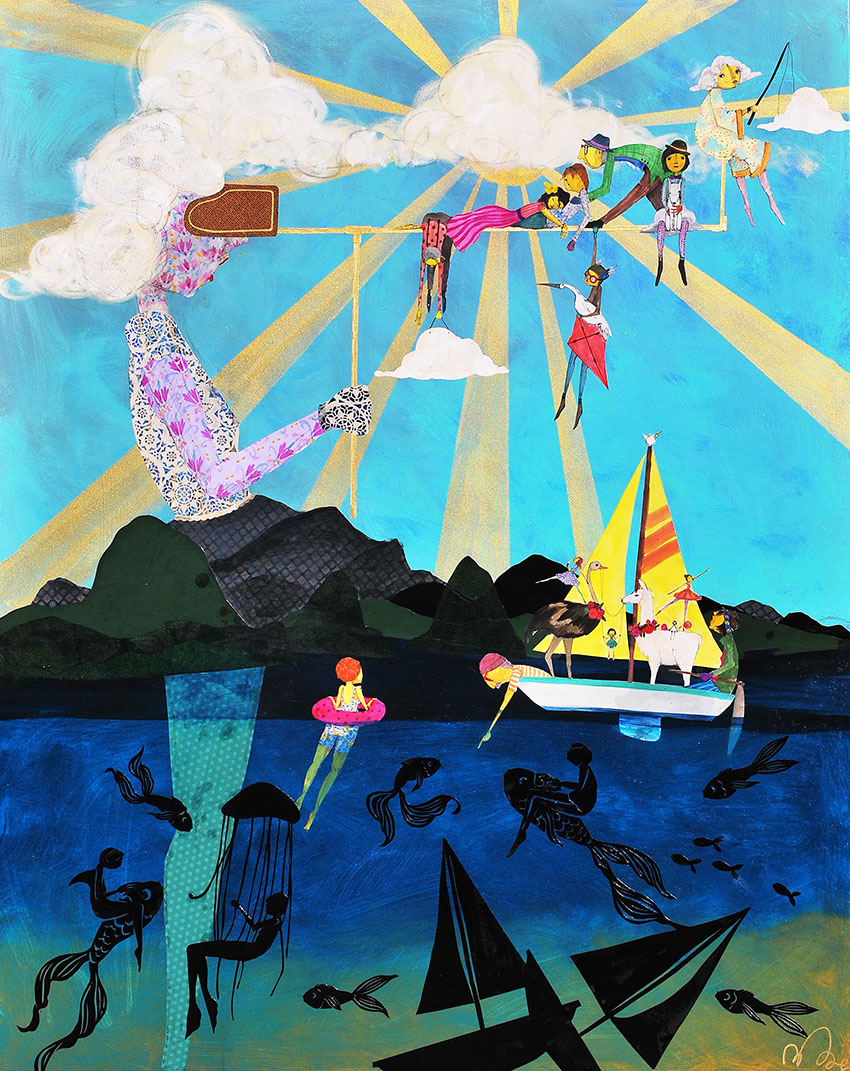 Denise Duong is a Vietnamese American artist and muralist from Oklahoma City who studied sculpture and printmaking at the School of the Art Institute of Chicago. Her work includes drawing, painting and large-scale murals, scattered throughout Oklahoma City, Tulsa and beyond. Several of her murals are on view in Oklahoma City, at 21c Museum Hotel in the Train Shed on the patio of Mary Eddy’s, and in the West Village and Plaza districts. 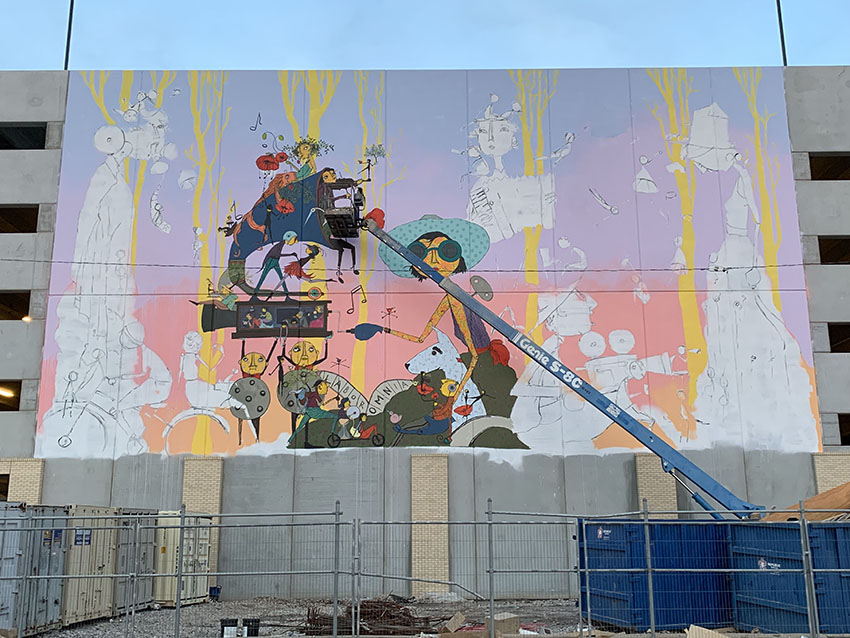 Growing up with an immigrant family in a city that cultivated individuals’ imaginations helped form Duong’s fascination with state lines, oceans, skies, and emotions. 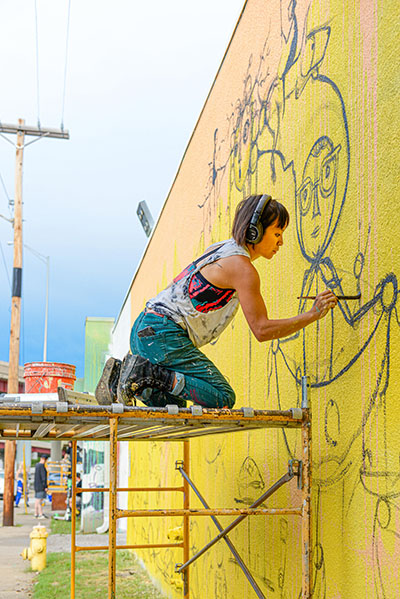 All of these things play an integral part of her art’s growth and inspiration. Her narrative works on canvas are created with acrylic paint, paper, watercolor and ink. There are a handful of characters that repeatedly show up in Denise Duong’s work. She hasn’t named them but thinks of them as friends and finds it cathartic to draw their shapes.

When she’s in Oklahoma, she’s painting in her studio at all hours of the night, when things are quiet and she has the world to herself. If she’s not in her studio, odds are good that she’s skipping around the globe, gathering imagery to bring back to her work.

As a child, Duong drew and drew. She knew she wanted to be an artist, but had also intuited that saying so led to, if not discouragement, something close. But she never wavered, and it seems unlikely that any other path would have suited her.