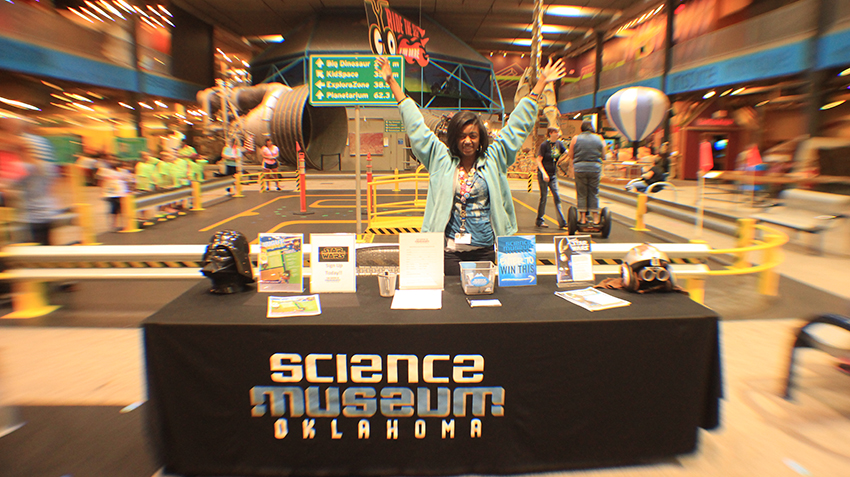 Complete and utter darkness. Darkness so strong you can’t even see your own hand in front of you. Until you notice a faint glow above your head—the faint, familiar glow of stars. Slowly, the glowing becomes strong enough that the darkness isn’t all that dark anymore. In fact, it looks almost inviting. Now there’s millions of small glowing specks in the sky and no city lights to distract you from them. Just you and a beautiful glittered sky. You hold your gaze, totally fixed to this breathtaking sight. And then a voice—a loud, seemingly omnipresent voice—reminds you that “We’re looking at the view from the middle of the Atlantic Ocean in late October of last year.”

Oh, right, of course. You got so hung up on the beauty of it all that you forgot—you were in a planetarium all along!

Such were the beginnings of Oklahoma’s illustrious Science Museum (which some of us older Okies might still mistakenly call by its former name The Omniplex from time to time). Originally a humble planetarium, the Oklahoma Science Museum has grown to be Oklahoma’s largest (and most fun!) testament to the joys of science of all kinds: geology, biology, seismology, if it ends with -ology, it has a presence there! With more than 350,000 square feet of pure hands-on science fun, it’s easy to see why the Science Museum is considered to be one of Oklahoma’s best and most creative museums.