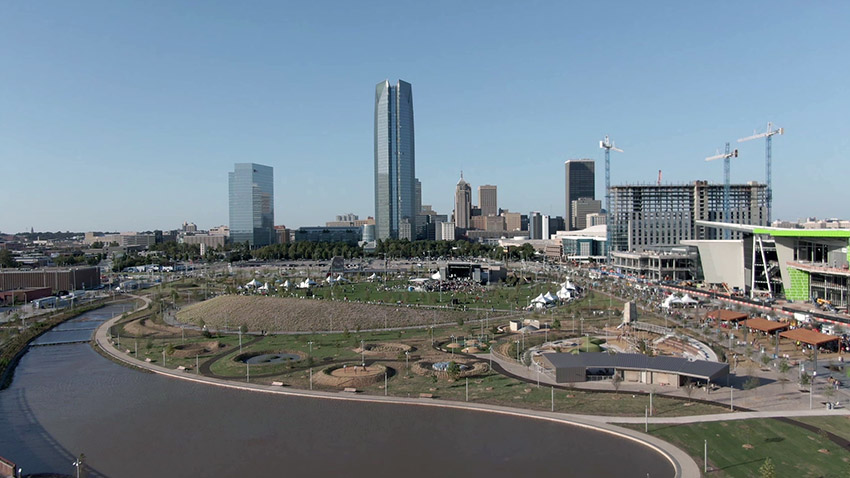 When Scissortail Park opened in September 2019, Oklahoma City was introduced to the area’s newest outdoor music venue with the promise of fun-filled, diverse musical performances from intimate local gatherings to large-scale concerts. Since opening, Scissortail Park has enjoyed shows from Kings of Leon, Markus James & the Wassonrai, Billy Jones, Oklahoma City Philharmonic, Jonathan Tyler, Jabee, Kyler Reid, Steelwind, and more. In recent months, along with venues around the world, Scissortail Park has stopped creating opportunities for crowds to assemble but is still committed to bringing the community together through music.

“When public gatherings are again allowed, Scissortail Park will be the site of a wonderful outdoor concert series featuring a wide range of music,” said Maureen Heffernan, CEO and president of Scissortail Park Foundation. “Until then, we are offering Scissortail Streams, online concerts that feature Oklahoma musicians to support local talent and to introduce more of the public to our city’s exciting new park.”

The first Scissortail Streams concert to be featured is a performance by Oklahoma singer/songwriter/producer, Jason Scott who in 2017 co-produced his own 5-song debut EP Living Rooms with fellow Americana Okie Travis Linville. The debut video will be released at 7 p.m. on Friday, March 27.

“We decided it was important to support our community of local artists and offer them an opportunity to perform,” Heffernan continued. “We have chosen to record these artists in locations around the Park instead of streaming them live to ensure the social distancing guidelines are being maintained. We hope you enjoy our Scissortail Streams concerts. Scissortail Park’s pathways and grounds are open daily for walks and a respite during these uncertain times. Our park is here for you.”

About Jason Scott
Americana artist Jason Scott was raised in the land of boots, bolo ties, and burial grounds; bred on the Bible and shielded from most secular entertainment. His seemingly distant memory of that Oklahoma City childhood is a mosaic of tattered song books, equal parts fire and brimstone, and sneaking off to his uncle’s ‘79 Ford Bronco to listen to Conway Twitty tapes. Back then, an outside observer might have predicted Scott would grow up to be a preacher. But, Scott himself knew better: he was meant to make music, and a lot of it.

Scott, now 34, has an enviable knack for earworm melodies that wrap warmly around his life-pondering lyrics. He’s a skilled multi-instrumentalist quickly becoming known for his unrelenting, sweat-soaked performances. Scott is a producer, an engineer, and an in-demand session musician who in 2018 produced albums for Americana artists Carter Sampson, Ken Pomeroy, and Nellie Clay. In 2017 he co-produced his own 5-song debut EP Living Rooms with fellow Americana Okie Travis Linville. Scott is currently on tour with his fiery four-piece band delivering songs from Living Rooms and showcasing new material that will be on his long awaited first full-length album to be released in 2019. Scott self-released Living Rooms on his personal ON studios label and does most of his recording at ON studios, the home workspace he built. It’s pronounced “Owen” studios, named after the eldest of Scott’s two sons.

He is a member of the Americana Music Association and a BMI-licensed writer.

Scott recently earned a global tip of the hat from NPR Music when they spotlighted his song “She Good To Me” on World Cafe’s Heavy Rotation: 10 Songs Public Radio Can’t Stop Playing alongside cuts by MGMT, Moby, and Jade Bird. The breezy mandolin-and-brushes gem is a tribute to Scott’s wife of 10 years and is part of the Living Rooms EP.

Scott’s brag-worthy band has opened for the likes of Jimmy Dale Gilmore, Dave Alvin, Mipso, Parker Millsap, and played many festivals throughout the country.