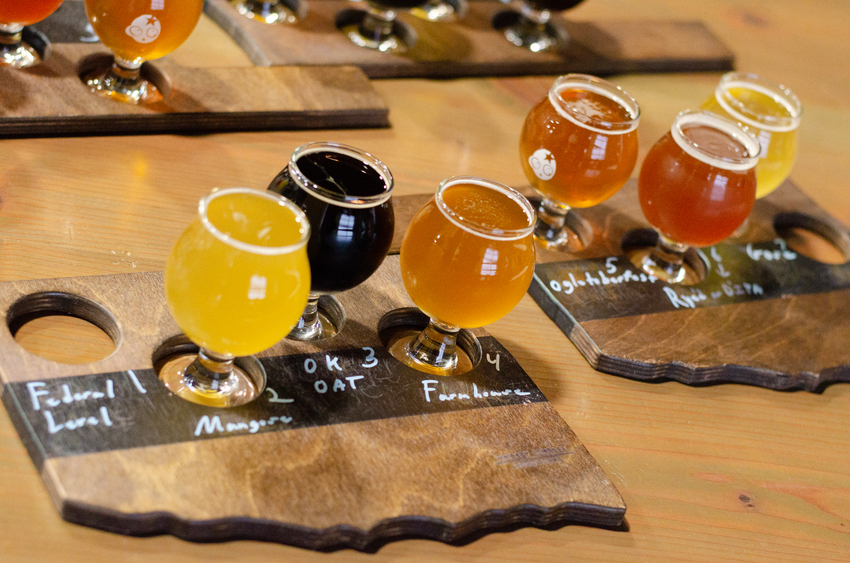 While plenty of places might have Thunder watch parties with health restrictions in place, the safest thing to do is stay home. Of course, if you do go out, be sure to wear a mask.

But if you drink beer at home, no mask is needed, which is a great incentive to plop down on your couch for the games.

If you want to grab a bite to-go for watching the game and save time doing dishes, be sure to place an order at Bricktown Brewery and grab a growler of beer while you’re at it. Bricktown Brewery has been brewing craft beer since before it was cool. A diverse menu offers up some of the tastiest fares in town, from sea salt caramel sweet potato fries to a Heath candy bar skillet brownie. Bricktown Brewery offers a wide range of brews that come straight from the vats to their taps at their location at 1 N. Oklahoma Ave. But there are four locations in the metro; two spots in Oklahoma City, one in Edmond and another site in Midwest City.

Find yourself not near a Bricktown Brewery? If you’re in the Belle Isle area (around Penn Square Mall), Belle Isle Restaurant and Brewery is another spot for food and brews to go, all in one stop. Belle Isle also sells growlers and has an enticing menu.

But if all you seek is beer, there are plenty of great locally-made options, though we have a couple great friends making some yummy brews.

Our friends at Anthem Brewing Company started making beer in 2011. Anthem Brewing has an awesome taproom just waiting to be explored at 908 SW 4th St. Known for its laid back atmosphere and relaxed setting, Anthem’s taproom is right next to its brewing facility so you can basically sit by the equipment and watch your favorite beer being brewed.

Anthem has a four-ounce sample size that is perfect for drinkers wanting to explore different varieties, such as house ales, stouts and pilsners, which are sure to please any beer lover’s palate. Anthem also has wide distribution so you can grab some from an area store.

Also on the shelves, you’ll find brews from another original and our friend, Coop Ale Works. It is the state’s largest independent brewery known for its diverse beer options, ranging from a 10% ABV Belgian Dark called DNR to a 4% ABV Spare Rib Pale Ale. The company also recently launched a hard seltzer under the name Will & Wiley. Coop’s taproom at 4747 Council Heights Rd. is closed due to coronavirus precautions, so be sure to look for the Coop Ale Works brand at supermarkets, convenience stores and other retail locations, as they have wide retail distribution as well.