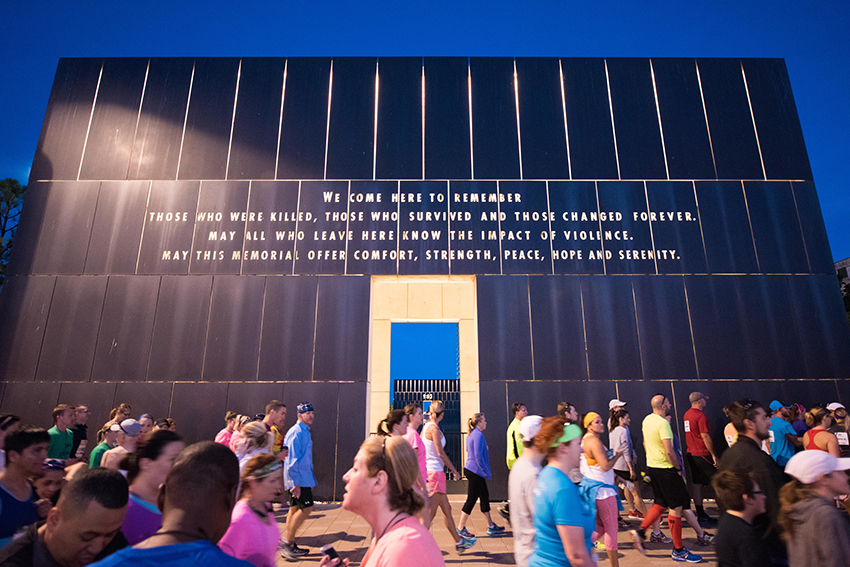 After the bombing, a security fence was quickly erected around the perimeter of the bombsite. This fence became a de facto memorial of sorts, with mementos, cards, prayers, toys, stuffed animals and the like left by Oklahomans and visitors who wished to pay their respects to and remember those who were killed. From this temporary memorial and a task force created by then-Mayor Ron Norick came an outdoor memorial and a memorial museum.

The Outdoor Symbolic Memorial is on the site of the Murrah Building and “honors those who were killed, those who survived and those changed forever on April 19, 1995.” The Memorial Museum occupies part of the historic Journal Record building, which was adjacent to the Murrah Building and heavily damaged in the attack. The museum allows a self-guided tour and features interactive displays, artifacts and video to tell the story of what happened that day.

The Outdoor Symbolic Memorial is “a place of quiet reflection” and consists of a reflecting pool and 168 empty chairs, one representing each victim, in addition to many other symbolic elements, including the famous “Survivor Tree.” It is free to visit. The Museum, 620 N. Harvey Ave., is open Monday through Saturday from 9 a.m. until 6 p.m., and Sunday from 12 to 6 p.m. The average Museum visit is about an hour and a half (note that the Museum is also closed on Easter). Get more details on visiting.