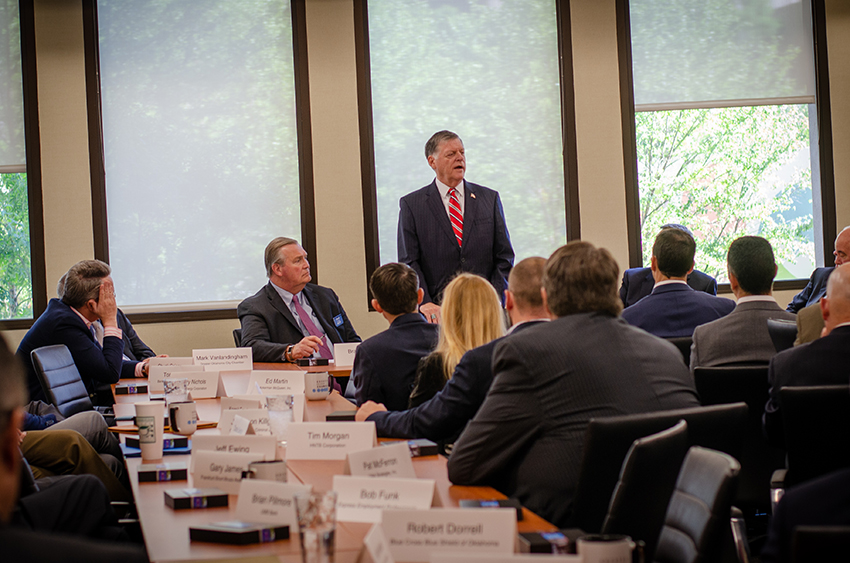 Congressman Tom Cole, who serves Oklahoma’s 4th District in the U.S. House of Representatives, chatted with some of the Chamber’s top-level leaders on Friday, April 26, in a candid discussion about the current state of American politics. Cole shared his perspective on how decisions made in our nation’s capital could impact Oklahoma City, including insights on the strength of Oklahoma’s military institutions, spending priorities for the committees on which he serves, the future of federal medical marijuana laws and more.

In 2011, Congress passed the Budget Control Act, a measure that was enacted in response to the Debt Ceiling Crisis of the same year. While the act reduced the deficit, it also led to across-the-board cuts for the U.S. military. And while investment in our military was down, other countries used that opportunity to increase their military readiness. The Trump administration has placed a high priority on restating military investment, a decision that will have a positive impact on military institutions in Oklahoma. Both Ft. Sill in Lawton and Tinker Air Force Base in Oklahoma City play a critical role in the global mission of the U.S. Air Force.

Fortunately for Oklahoma, the state’s congressional delegation are well versed in the importance of the military to our state’s economy and, according to Cole, the delegation “moves as one” when it comes to military issues. Out of the 435 congressional districts in the United States, Oklahoma’s 4th Congressional District ranks 16th in the number of federal employees it contains. That’s more than any district in New York, California or Texas, and underscores the role these institutions play in Oklahoma communities.

Oklahoma also has a strong advocate in Sen. Jim Inhofe, who serves as the chairman of the Senate Armed Services Committee. Inhofe plays a key role in ensuring that the U.S. military—including institutions in Oklahoma—have the best equipment, training and resources necessary to meet our nation’s diverse security challenges. Cole is also the third-ranking member on the Subcommittee on Defense, giving Oklahoma significant military influence on both sides of Congress.

Cole also serves on the House Committee on Appropriations’ Subcommittee on Labor, Health and Human Services, Education and Related Agencies. This committee has jurisdiction over spending measures, including appropriations bills that fund government agencies. Cole discussed spending priorities for the agencies his subcommittee directly impacts, the largest of which is the National Institute of Health.

Cole mentioned that his subcommittee has prioritized increasing the money available for federal research grants, giving organizations like OMRF and the Stephenson Cancer Center more access to funds that will impact medical advances. In the past, the federal government went from funding one-third of research to one-sixth, and the result was a noticeable decline in people who chose to work in the biomedical research field. Now, the National Institute of Health is shooting for sustained increases in grant funding every year.

Other spending priorities are focused on education access and attainment, with funds being used to increase monetary support for first-generation college students, early childhood education programs and career technology institutions. In all, Cole believes that these priorities are "things that most everyone can agree on."

Cole also touched on an issue that many Oklahoma banking institutions are facing: how to do business with companies that sell medical marijuana. Because marijuana is still illegal on a federal level, banks (which are governed by federal laws) are left grappling with many legal questions about how they can interact with the industry, if at all. Businesses who sell medical marijuana are also left with very few options for how to safely save or invest their profits. As Cole pointed out, cash-heavy businesses often invite crime, so it is incredibly important for the federal government to regulate this issue appropriately. According to Cole, a federal bill is likely coming soon.

Cole spoke to business leaders as part of the ongoing roundtable programming available to partner-level Chamber members and up. Learn more about the benefits of a Chamber membership by contacting Sunny Cearley, vice president of membership, at scearley@okcchamber.com.