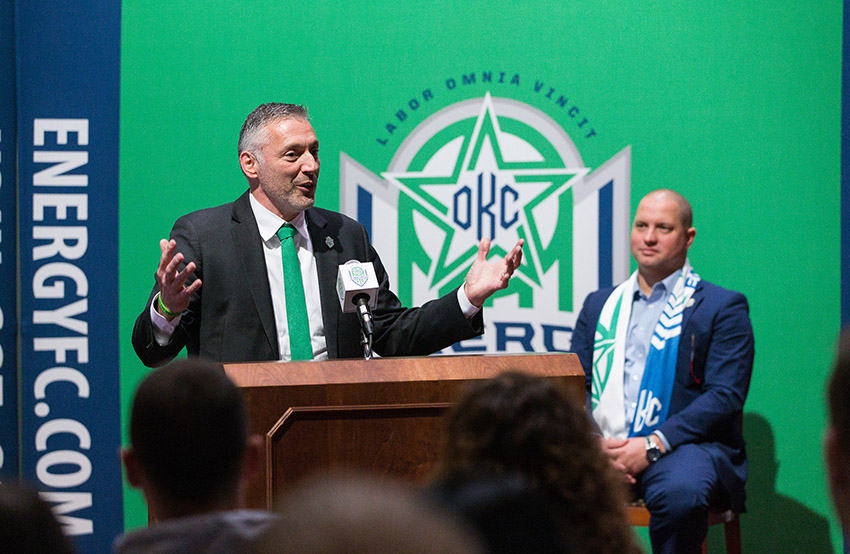 “I’m ecstatic to be here in this ever-changing city,” said Pascarella. “I am extremely excited to get started and am thankful for everyone who helped with the hiring process to make sure this was the right fit for the city, organization and myself.”

Pascarella was hired by a committee of Energy FC front office staff, including General Manager Jason Hawkins, Chief Operating Officer Jeff Kretchmar, Director of Marketing and Communications Billy Walton, as well as club owners Bob Funk, Jr., Tim McLaughlin and Donna Clark. Soccer City owner Matt Fansher was also included due to his knowledge of the sport and to gain perspective from a fan’s point of view.

“It was important to us as we went through this process to leave no stone unturned,” said General Manager Jason Hawkins. “We reached outside of the organization to speak with former players that had been around Coach, colleagues of Coach and our fans as well. A great example of that would be Matt Fansher, who sat in on every interview. He brought a unique perspective having been an Energy FC supporter since day one along with the fact he’s a lifelong Oklahoma City resident as well as a soccer player and fan.”

Pascarella arrives at Energy FC from Minnesota United FC of Major League Soccer, where he was an assistant coach since January 2018. Prior to his time in Minnesota, Pascarella managed the Des Moines Menace of USL League Two during the 2017 season and was an assistant and goalkeeper coach at Sporting Kansas City from 2009 to 2016, winning the MLS Cup in 2013 and the US Open Cup in 2012 and 2015.

Pascarella played professional soccer for nine seasons in the United States and Peru before beginning his coaching career at the University of Maryland in 1998. He also spent time with the Northern Virginia Royals of USL League Two and Virginia’s U.S. Olympic Development Program.