After 20 years, Heartland Flyer still rolling down the tracks 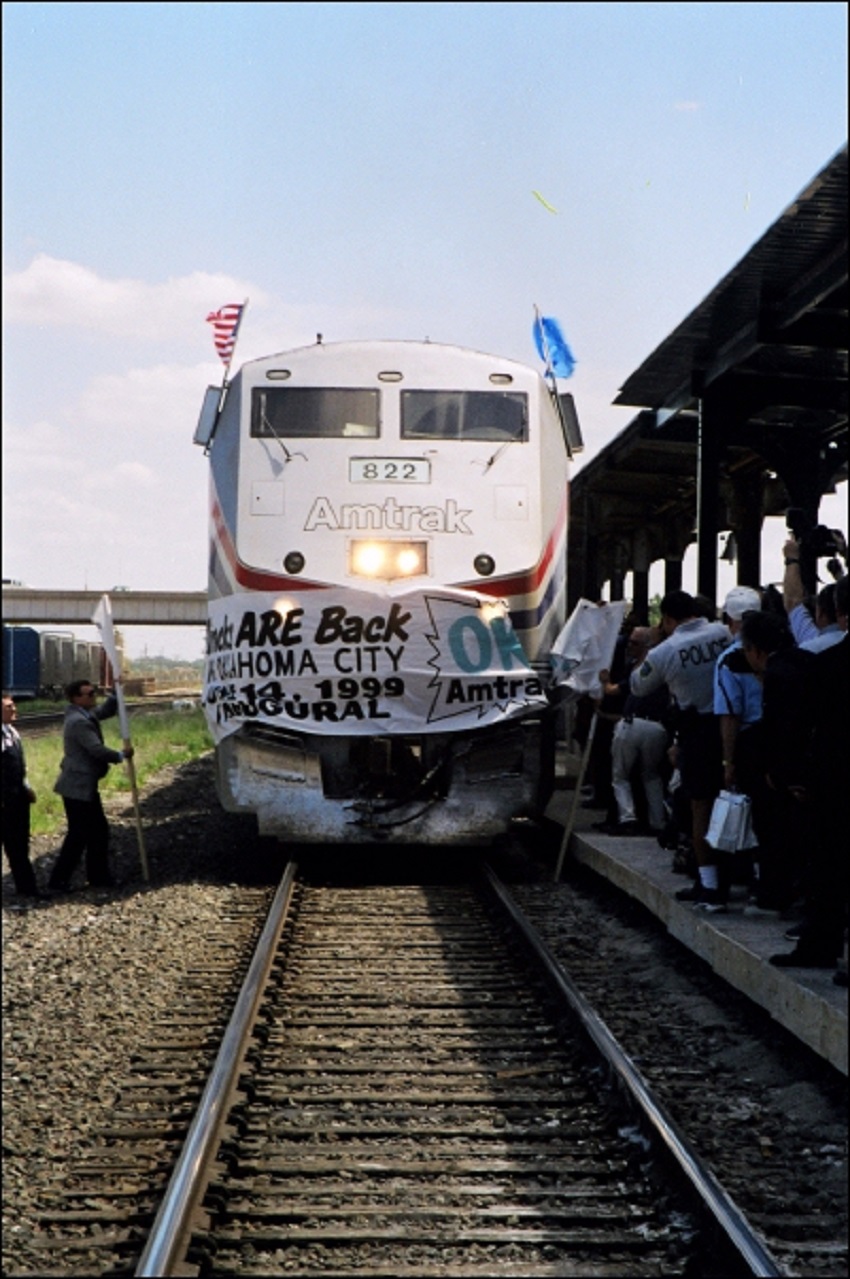 Amtrak’s Heartland Flyer is celebrating 20 years of passenger service. The daily service has carried more than 1.4 million passengers between Oklahoma City and Fort Worth during the past two decades.

The Heartland Flyer was started on June 15, 1999, as a joint venture between Amtrak and the Oklahoma Department of Transportation, ending a 20-year absence of passenger train service from Oklahoma and North Texas.

The train connects to the Texas Eagle in Fort Worth, which provides rail service to major cities including Dallas, Little Rock, St. Louis, Austin and San Antonio.
On May 18, 1999, Amtrak started taking reservations for the “new” rail service between Oklahoma City and Fort Worth under the provisional name “The New Train.” Oklahoma Senator Don Nickles conducted a contest asking Oklahoma children to name the new passenger train. During the contest, more than 300 children submitted 500 different suggestions. The winning name, “Heartland Flyer,” was submitted by 11-year-old Katie Moore.

Recently, Moore rode the train with her family.

“It’s been a long time. I’m obviously not a kid anymore and I have a family of my own now,” Moore said. “I mean I’m so happy that it has lasted this long.”

On June 14, 1999, the 11-car Inaugural Heartland Flyer headed north out of Fort Worth with dignitaries, including Sen. Nickles, Gov. Frank Keating of Oklahoma, Amtrak officials and mayors from each of the towns served by the Flyer. Thousands turned out to greet the new train with waves, smiles, banners and even marching bands.

Marc Magliari, Amtrak spokesperson, said not every service makes it to 20 years.

“People pulled together in the state transportation departments, here in Oklahoma and in Texas, worked together to make this train successful,” Magliari said. “It takes communities working together, state DOTs and elected officials to have this kind of success. It’s not easy, it’s not universal, it’s not simple, but it’s possible and it happened right here.”

Magliari said there is something special about this part of the country and Amtrak wants to show Oklahomans, Texans and others the beauty of each state.

Two years ago, Oklahoma’s only passenger train line survived a last-minute budget raid attempt when a proposed state budget sought to take money out of the Passenger Rail Revolving Fund to help shore up a nearly $900 million budget hole, which would have put the rail line in jeopardy.But officials with ODOT were successful in convincing lawmakers to look elsewhere for the money and the state spent $2.9 million to maintain the Flyer, which makes five stops in Oklahoma.

While the state has had to work just to keep the Heartland Flyer operating in its current form, expansion continues to be part of the conversation.

“We’ve been talking for quite a while about improving the Heartland Flyer and one of the discussions include extending it up to Newton,” said ODOT’s Perry, referring to the Kansas town outside Wichita that is a stop on the Southwest Chief, an Amtrak line running from Chicago to Los Angeles.

Several proposals for extending the route of the Heartland Flyer have been made over the years. Expansion planning revolves around portions of the former Lone Star route and the state-owned route from Oklahoma City to Tulsa.

Amtrak has submitted its fiscal year 2020 grant request report and included a Heartland Flyer extension on its project list. This proposal would bring the line to Newton, Kansas. From there, passengers could connect to a major rail route that links Chicago to Los Angeles.

Extending the line north to Kansas would require additional state funding, but advocates believe it could actually make money for the state.

“Rather than being a terminal, they can make Oklahoma City and other communities on route destinations for economic development,” said Evan Stair, president of Passenger Rail Oklahoma and Passenger Rail Kansas. “Look at Guthrie and its heritage tourism industry. Look at the potential of amplifying state fortunes with the creation of a stop in Thackerville for the WinStar Casino and Resort.”

Amtrak officials said a northbound line may still be years away, but they believe there is demand for a connection between Wichita and Oklahoma City.

“We are currently running a bus from Newton to Oklahoma City every night and we never suggested that would be the end-all be-all,” said Amtrak’s Magliari.

The Chamber has consistently made expansion of passenger rail service a priority and supports continued dialogue on extending the service to Newton, Kansas, which would connect Oklahoma City to Kansas City, St. Louis, Chicago and other locations on the Amtrak system.

“Passenger rail service is a key component of the development of the Oklahoma City intermodal hub and the future development of commuter rail throughout the central Oklahoma region,” said Mark VanLandingham, vice president of government relations and policy. “The Chamber works with the Oklahoma congressional delegation, the Oklahoma State Legislature, ODOT, the City of Oklahoma City, the Class 1 railroads and the Association of Central Oklahoma Governments (ACOG) to oppose efforts to reduce or eliminate state or federal funding received by Oklahoma to operate the Heartland Flyer Amtrak service to Fort Worth, Texas.”

“The Heartland Flyer continues to be a major transportation solution for connecting Oklahoma to rail options nationwide,” Oklahoma Secretary of Transportation and ODOT Executive Director Tim Gatz said. “We appreciate the support of Oklahomans and Texans for this line and look forward to opportunities to keep it growing in the future.”