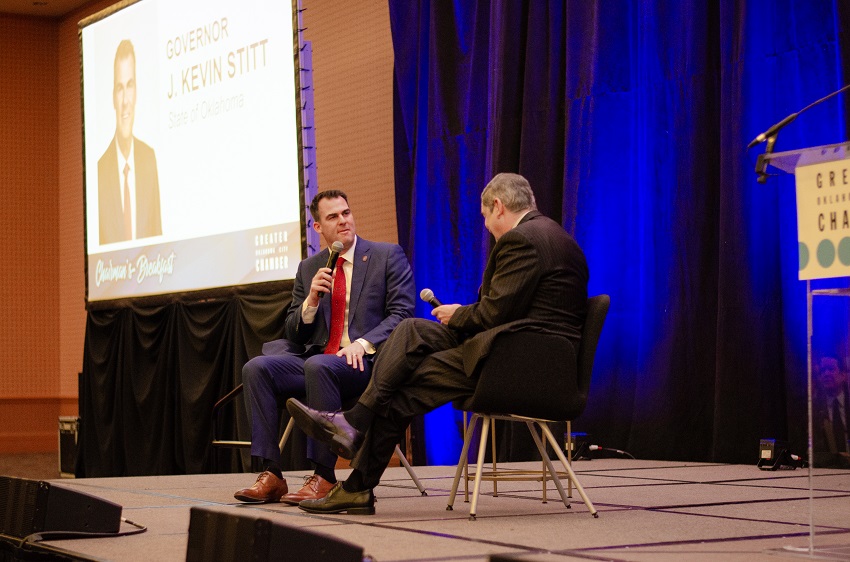 Following up on the governor’s bold vision to make Oklahoma a top-ten state through a positive turnaround that delivers a better future for all Oklahomans, Chamber Chair Percy Kirk noted that there are many areas for collaboration. “We take our role in serving as the voice of business very seriously. And, an important part of that role is working together to improve all of Oklahoma. We're looking forward to building our relationship with Governor Stitt and other elected officials statewide as we collaboratively work towards a brighter future and his goal of being a top-ten state.”

The new governor spoke passionately about his desire to make government more transparent and accountable.

“As the chief executive of the state, I look at my job--and let's not overcomplicate it--I'm supposed to run the agencies, I'm supposed to deliver services and results for Oklahomans,” he said. “This is a big service organization. At the end of the day, we spend twenty billion dollars of state and federal dollars through our different agencies and we all want the same things, as Oklahomans. We want the best schools, we want the best healthcare, we want the best roads and bridges. The way we have to do it is, we've got to be able to manage them.”

To do that, the governor has requested direct control over who runs each agency, a responsibility that, in the case of many agencies, resides with independent boards.

"By granting the governor hiring and firing authority," Stitt said, "you will know exactly where the buck stops -- at my desk.  It's just a novel concept. But you've got to be able to, as the chief executive, to deliver results.”

Another important issue that the governor addressed is the state having the highest national incarceration rate and the need for criminal justice reform.

“Probably everybody in this room understands we're number one in something we should be number 50 in,” he said. “And, I don't think we have any different issues or people than any other state. So, to me, we're doing something wrong... We've got to address the systemic problem of whether it's drug, whether it's mental illness, whether it's addictions. We've got to figure out better programs to divert them and that's why I've asked for ten million dollars from the legislature this year. And then, the second thing, when people are actually in prison, we've got to come up with better ways to train them and get them ready for the workforce. Because everybody that's in prison, or most of them, are gonna be our neighbors, one day. We want them back in the workforce, we want them back taking care of their children. So, we’ve got to start training them.”

Stitt cited a new program that trains inmates in computer programming as an example of a successful effort that provides prisoners skills for success following their release. “We've got to engage training to get these folks ready for the workforce. And then, the last thing, when they get out of prison we've got to reduce recidivism.”

The governor addressed the current means of funding the state’s judicial system as a contributing factor to the high rate of recidivism. “When you think about the way that our district attorneys are funded today, it's from fines fees and court costs. About 50 percent of it comes from fines fees and court costs. That is a perverse incentive that we need to change, so I'm pushing and asking the legislature to fund the district attorneys appropriately, but let the fines fees and court costs come to the legislature. Let them appropriate those dollars. It is a better way to align the system so we can make sure that we waive things when we need to. Because, if you get out of prison and you're getting a minimum wage job or you can't get a driver's license and then you have a three thousand dollar bill in front of you, it's so overwhelming. It's hard to get them back going and so we've got to rethink those things.”

The governor said that common education is a core function of state government.

“We've got to get this right,” Stitt said. “Not everybody is gonna be a rocket scientist or a doctor or a lawyer. Only about 50 percent of our kids go to high school, so I want to make sure that every kid graduates from high school and knows that they have a great future in a career. Because the jobs of tomorrow are different than the jobs of yesterday, so we've got to do a better job of training and getting these kids ready for the workforce.”

The governor also said he will push for a teacher pay raise, because of the magic that happens between teachers and students in the classrooms. “It's got to come back to getting the best professionals and teachers in our classrooms. We can really move the needle and be number one in the region with another $1,200 pay raise.”

Stitt also outlined plans to match $5,000 with a local districts to recruit new teachers, or somebody that's been out of the profession for three years, to come back into Oklahoma. The governor said there are about 33,000 certified teachers in Oklahoma that currently aren't teaching. “So, I've got to do some things to get them encouraged to come back into the classroom, because that's where it all starts.”

Speaking on gun control and the first piece of legislation he signed into law, the governor said he was pleased that the bill contained protections for businesses and property owners, event hosts and college campuses to ensure that they can continue to prohibit firearms.

“We helped push the legislature to make sure that it had those protections in there. I was very cognizant of the economic development, the commerce problems with previous kind of looks at this bill.”

Stitt also said that he is a constitutional conservative and somebody that believes in in the right to bear arms, but private property owners still have the right to determine what's going to happen in their businesses. “As a business owner, that should be the right of our business owners and I'll continue to support that.”

The governor said he will not allow any kind of legislation pass across his desk that would be perceived, or in actuality, harm the economy or businesses. Discussing proposed legislation that would roll back a number of reforms gained by the passage in 2013 of workers compensation in the state, Stitt maintains that Oklahoma is open for business,

“If we're an outlier and we give somebody an opportunity to go across the state line and have a better deal, whether it's workers comp or whatever it is, that's a problem for me,” he said. “Because I want Oklahoma to be the most pro-business friendly state. And I'm gonna look to make sure we're competitive in everything that we do and take away any kind of excuse from expanding and growing and moving companies here.”

Stitt also addressed a few other issues, namely the possibility of a Medicaid expansion. He said there needs to be caution when expanding health care spending.

“The first thing I told everybody is it would be ridiculous to even have a conversation about expanding Medicaid, doing anything different, until you actually can manage that agency. That's the Health Care authority. That is the number one spend in state budget. It's five and a half billion dollars. We were the only state that didn't give the governor the authority to oversee that agency. Because, at the end of the day, we all want the same thing. We want dollars in our health care system. We want dollars in our rural hospitals, in our nursing homes and we want to make sure that we're doing that like the other states around us.”