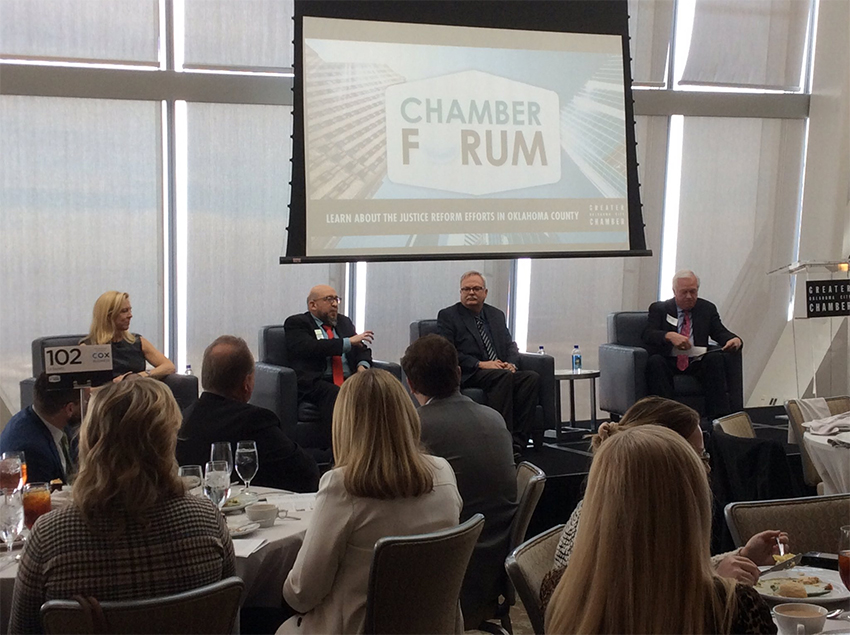 “We’ve got a big problem, but we’ve got bigger solutions so let’s not turn our head; let’s not somehow shy that off to the next person. Let’s all just take ownership of it.” Said Greg Williams, CEO of the Oklahoma County Criminal Justice Authority at the January Chamber Forum.

In the past few years, the Chamber has put itself at the forefront of criminal justice reform efforts in Oklahoma, even going so far as to starting the Oklahoma County Criminal Justice Advisory Council (CJAC) in 2015. Although small compared to the Chamber’s more well-known CJR efforts, this forum was no less an important piece of the same machine that recently helped decrease OKC’s prison population by more than 30%. Incidentally, another critical piece in that machine is spreading awareness (and by extension, encouraging community engagement).

“I really am confident…that we’re going to continue to see the progress grow and grow,” said Tardibono.

“I absolutely assure you, we will find links as to why your role is important in this transformation,” added Everest.

The importance of recognizing CJR as a team effort was emphasized throughout the entire forum—particularly the fact that it’s especially important in Oklahoma, where CJR is treading through, in Everest’s words, “uncharted waters.”

“The County Detention Center’s been run by the sheriff before statehood, and so the uncharted waters is really having a state public trust come into the county system and recognize how we can maximize the efficiencies and be the best servant to the people of the county,” she’d later elaborate.

Also emphasized throughout the panel was the importance of recognizing “the pipeline” early on—recognizing that there need to be more opportunities and resources available for people leaving prison (as well as their families) and improving the way we prevent adverse childhood experiences (like abuse) that may put someone in “the pipeline” early in their lives.

You can learn more about CJR efforts in Oklahoma County and how you can get involved here.