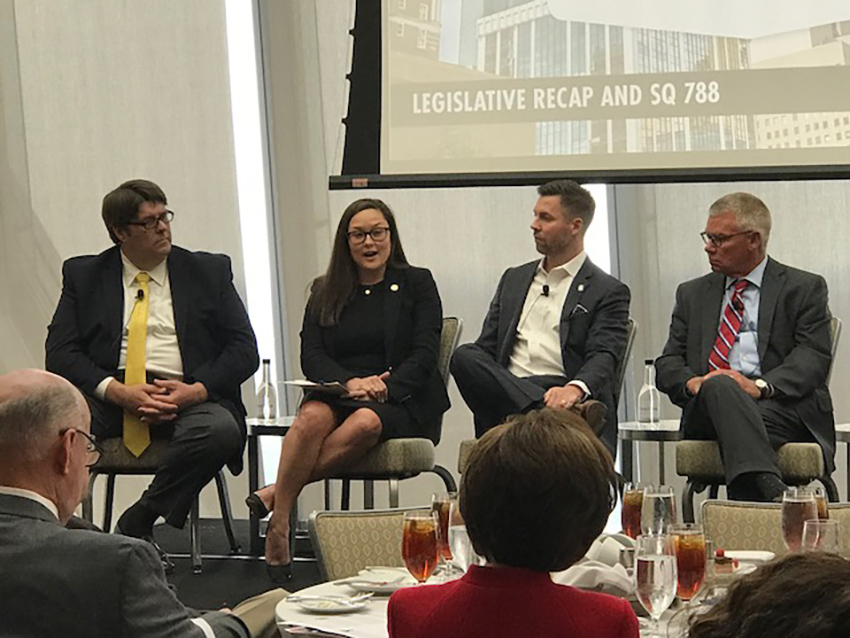 Nearly 150 business leaders recently gathered at Vast for a Chamber-sponsored update on the recent legislative session and State Question 788, the so-called medical marijuana state question. SQ 788 has proven to be a “hot button” issue and the insights provided by the panel on this issue, as well as the overview of the legislative session, provided a balanced look inside the goings-on at the capitol.

The 2018 legislative session provided some unique challenges. From the historic teacher pay raise to the protection of the economic development incentives, to breaking difficult log jams both on revenue and criminal justice reform, the business community fared well in a volatile political climate.

“The first thing I would tell you is that I am glad it (the 2018 session) is over,” quipped VanLandingham. “As far as our legislative priorities go, [it was] maybe one of the most successful years we’ve had in the ten years I have been at the chamber. We started out with two priorities from last year that we didn’t get, that we were able to achieve this year. The first was teacher pay raises. The number of teachers leaving the state, it was a crisis situation and we made that a top priority. The House and Senate passed and the governor signed money to fund teacher pay raises. We don’t necessarily agree with the way it was funded, or all components of that, but from our perspective, the teacher pay raise was so important that we aren’t going to quibble with the details. The outcome was good.

The second thing we didn’t achieve last year but did achieve this year was criminal justice reform. This year we were able to work with the district attorneys council, the state chamber, the governor and her staff, and legislative leadership to come up with nine bills that will decrease the projected increase in the prison population by 70 percent over the next few years. You look at some of the secondary things, the hotel-motel tax, where, at the time where we are getting ready to break ground on a $200 million convention center and hotel, that would have made Oklahoma City the highest occupancy tax in the country. We were able to get that component of the revenue packaged repealed. That was a big deal to our CVB, who tries to bring in conventions. We protected all of our economic development incentives that the chamber uses. We got another one passed called the Oklahoma Quality Events Act, which is big for us, our ability to recruit events to Oklahoma City and keep our existing events. Even minor things like protecting money for the Heartland Flyer. There’s not really anything that we set out to achieve that we didn’t achieve. It was a long session, but, at the end, we are happy with the outcome.”

“When I was knocking doors two-and-a-half years ago, the consistent issue I heard on the doorstep was ‘Fix the budget’ and ‘Fund education,’” he said. “Certainly in my district, education has been the driver of our growth and our community. It’s why we have been able to continue to attract young families who want to raise their kids and make Edmond home. For my first two years in the legislature, I wasn’t sure we were going to get that done. We did, and I think it’s a really big deal. Do I think it’s the finish line? Absolutely not. But I think we need to step back and recognize that we took a giant first step in funding education. Did I love the bill? No, I didn’t, actually. But, like most things in life, I felt like compromise was necessary to accomplish something.”

“I think we are at a tipping point in Oklahoma where we can decide to keep doing what we’re doing or we can start having the hard conversations, which is why I am so appreciative of being a member of the minority caucus, being on this panel to share my perspective, where I’m coming from with a different point of view than the majority,” she said. “I do feel there is room for compromise. I think that many of us that are new to the legislature have a passion to work together. We want to be different.”

One of the measures the legislature considered was the so-called Step Up, Oklahoma plan that would have stabilized state revenue, reformed state government and provided a raise in teacher pay by $5,000 a year. While the measure ultimately failed to garner passage, Munson voted in favor the bill, though many in her caucus did not.

“I decided ultimately to vote in favor of it,” she said. “I voted for all of the revenue packages because I'm an optimist and I wanted to be for things; I don't want to be against them. I think the conversations we had towards the end - specifically those of us in the Democratic caucus with business leaders and those who traditionally don't engage us in conversation - were really, really important. I think many of the leaders of the Step-Up coalition realized that we have well-meaning, hard-working, smart, thoughtful Democrats in the legislature who want to be a part of the business conversation and be a part of the fiscal solutions, and I think that was important. I think, going forward, we all have to be involved in the conversation when these types of issues are brought up we have to make decisions that are critical to our state.”

The panel discussed several other prominent issues, including term limits, state government reform, the changing demographics within the legislative bodies, the impact the historic number of candidates running for election will have on the makeup of the next legislature and the number of new legislators at the state house. But most in the audience wanted to hear about SQ788, and the panel did not disappoint.

McFerron, campaign manager for the 788 is Not Medical coalition, provided an update on the anti-788 campaign.

“I think it's going very well, the coalition continues to grow,” he said. "We have quite a few chambers, trade associations... the Oklahoma Farm Bureau is our latest member to join the coalition. We have a group in the medical community that's very concerned about how this state question addresses medicine. From the state medical association, the hospital association, anesthesiologists, family practitioners, a full range in the medical community. And law enforcement: district attorneys, sheriffs, FOPs.”

McFerron pointed out that none of these groups are against medicinal marijuana, but, due to the language in the measure, they are united in their opposition to SQ788.

“It’s as close to recreational as you can get, if not being recreational. Some will make an argument that it's worse to have it, to elevate marijuana to this medicine status, because that makes it tougher to regulate,” he added.

VanLandingham noted that passage would create some real challenges for employers and businesses. “Most troublesome to most in the business community, is it says ‘Any employer may not discriminate against a person hiring, or in terminating decisions, or penalize a person based upon their status as a medical marijuana license holder, or the results of testing positive.’ There's only one exception to this: it's a very narrow, limited exception relating to companies who have contracts with the federal government.”

According to VanLandingham, this would create a protected class under the law of medical marijuana license holders from an employer's perspective. Employers are going to completely lose their ability to create, maintain and enforce a drug-free workplace. “Employees who drive heavy machinery, or work on an oil rig could no longer be disciplined for failing a drug test, although an employer could, arguably, under the state question, discipline an employee for having marijuana at work or showing up impaired. There are no restrictions on using it right before work or on lunch hour. It's just going to be really hard to get a grip on all of this stuff,” he added.

What happens, should the question pass? VanLandingham speculated that Gov. Fallin would immediately call a special session to tighten up some of the vague language contained in the original measure.  “I've seen a draft of a 307 page bill that's already been written that would address a lot of these concerns,” he noted. “We're hopeful that if it does pass, if we could get some restrictions on it and more thought can be put into it. From talking to House and Senate leadership, I’m confident that will happen should it pass.”

Many of her constituents are in favor of the measure, but she has also spoken with employers, public health leaders, and law enforcement, trying to get a better understanding where they're coming from and doing her own research.

“Hopefully we can, as a legislature - I don't know how well we'll do - but at least bring all the stakeholders – for, against - to come together and help guide us. Making sure that we're creating legislation and law that is beneficial to those who need medical marijuana; the decriminalization of it, and being mindful of employers and physicians, and all the individuals who are working against it and would like to see different language,” she added.

“What's interesting is, two years ago, had you asked me whether I would be sitting on a panel discussing marijuana legislation, or a vote of the people passing in Oklahoma, I would have said “Hell no!,” said Pugh. “But times have changed and the paradigms have shifted. So here I sit, discussing a very important and, again, nuanced issue that the state question does not do enough to detail, in my opinion, anyway.”

Pugh went on to say that the majority of the legislature is actually supportive of medicinal marijuana, but there are health concerns, as well as criminal justice concerns, that need to be considered.

“Regardless of what happens, I think you will see medicinal marijuana come to reality at some point in the state of Oklahoma,” Pugh said. “I would prefer us use the legislative process to make sure we do that properly. Everybody can have a seat at that table and voice their concerns and their opinions on that. I think we'll be back in special session to address it and, if not, I know some of my colleagues are already crafting legislation to address that in the next session.”