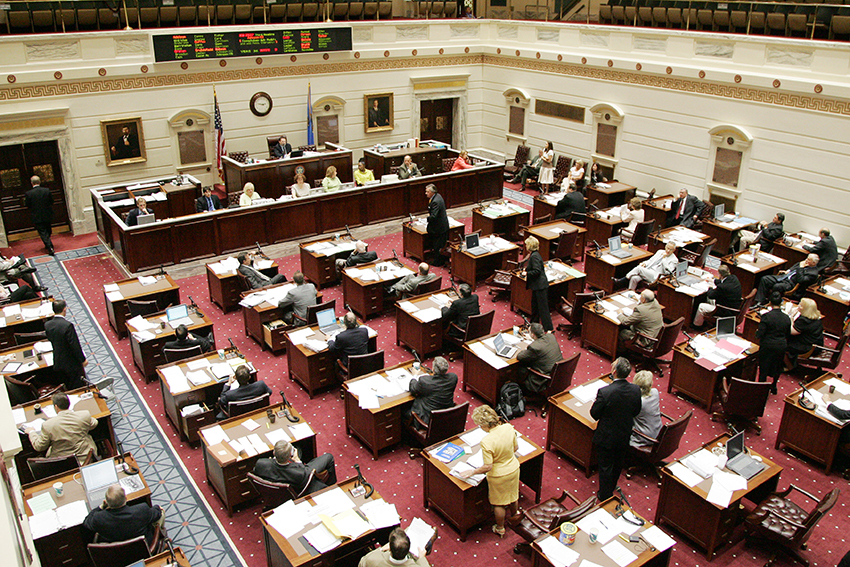 The 2019 Legislative Session began on Feb. 4 when Gov. Kevin Stitt (R-Tulsa) delivered his first State of the State address to a joint session of the Oklahoma House and Senate. Gov. Stitt, a successful businessman who was elected to office in November, called for an "Oklahoma Turnaround" to advance the state into the Top 10 nationally in areas such as criminal justice, health care and education. In his speech, Gov. Stitt stated he will pursue government reform measures to make it more accountable, efficient and taxpayer friendly. The Chamber is supportive of the governor's government reform efforts.

Gov. Stitt also called for a "re-imagining" of the Oklahoma criminal justice system by viewing those with addiction issues not as criminals, but as individuals who can be treated and re-enter society as productive citizens. Additionally, Stitt addressed the the need to support public education in Oklahoma and proposed paying teachers an additional $1,200/annually, which would move Oklahoma to first in the region.

This session, 2,800 measures (1,733 House bills, 21 House joint resolutions, 1,040 Senate bills and 21 Senate joint resolutions) were filed by legislators. This represents a record amount of legislation to be considered by lawmakers. The 2019 Legislative Session began with an unprecedented number of new lawmakers - 47 new representatives and 11 new senators (plus two senators who served as House members last year) - embarking on their first term at the State Capitol. Overall, 70 percent of Oklahoma's legislators have served in office two years or less.

The Greater Oklahoma City Chamber continues to lead a broad coalition called Oklahomans for Business and Property Owner's Rights. It is comprised of more than 50 associations, educational institutions, businesses and law enforcement organizations and was formed to ensure the broadening of gun-owner rights is done responsibly, safely and in harmony with property rights.

On Feb. 13, the House passed HB 2597, a permitless carry bill, by a vote of 70-30. The legislation would allow an individual 21 and older (and not a felon) to carry an open or concealed firearm without a license. This means an individual would not have to acquire training or be familiar with the state's gun laws in order to carry a firearm in Oklahoma.

HB 2597 will advance to the Senate for further consideration. The Chamber and coalition have worked with House legislative leadership to significantly strengthen the business owners and property rights provisions of Oklahoma's gun laws and those changes are now included in HB 2597.

The Greater Oklahoma City Chamber has partnered with the Tulsa Regional Chamber and State Chamber to pursue legislation to address the statewide workforce shortage of software and cyber engineers. Senate Bill 746 by Sen. Jason Smalley (R-Stroud) and House Bill 1146 by Rep. John Pfeiffer (R-Orlando) would create a new state economic development program to address the workforce needs of 21st-century industries by incentivizing employees with proper credentials in software engineering. There is presently an abundance of unfilled software and cyber engineering jobs. Many employers, including Tinker Air Force Base, are facing tremendous challenges in filling these positions. The Chamber believes this incentive program will make the difference in ensuring these entities are able to hire the people they need at a competitive wage. Key features of this legislation include:

Oklahoma now has the highest incarceration rate in the country and our prison population is projected to continue growing. Unless meaningful reforms are enacted, the state will be required to spend hundreds of millions of dollars on new prisons. The Governor, Speaker and Pro Temp have all stated criminal justice reform will be a top priority this session. Last year, our Chamber assisted in passing a number of reforms and we will continue to work with other stakeholders and the legislature to further reduce the number of low-level, non-violent offenders who are in prison.

This year, we are supporting a package of reforms, including: 1) making State Question 780 retroactive; 2) expanding the use of diversion programs as an alternative to prison for those with addiction and mental health problems; and, 3) reducing sentences for those face drug possession charges.

One of Gov. Stitt's priorities is to improve the efficiency of state government by increasing financial transparency in government agencies and giving the governor hiring and firing authority over top agency directors. Senate President Pro Tempore Greg Treat (R-Oklahoma City) is taking the lead by carrying a number of government reform measures this session. This includes his Senate Bill 1, co-authored by House Speaker Charles McCall (R-Atoka), which would create a Legislative Office of Financial Transparency to ensure more financial accuracy. In addition, Treat has a series of bills to provide the governor (or another appointing authority such as the Speaker or Senate Pro Tempore) hiring and firing authority over the heads of state agencies such as the Health Care Authority, the Department of Transportation, Department of Corrections, Department of Mental Health and Substance Abuse Services and the Office of Juvenile Affairs.

The Chamber is supportive of these efforts, and believes a government that is more accountable will have enhanced focus on delivering successful outcomes for core functions of government - education, transportation, public safety and health care.

The Chamber's executive committee met with newly-inaugurated Gov. Stitt for a roundtable dialogue on the governor's and Chamber's top agenda items. Topics of discussion included: government reform, criminal justice reform, economic development incentives, guns and education. The Chamber is appreciative of Gov. Stitt for the meeting and looks forward to working with his administration this year to advance Oklahoma.