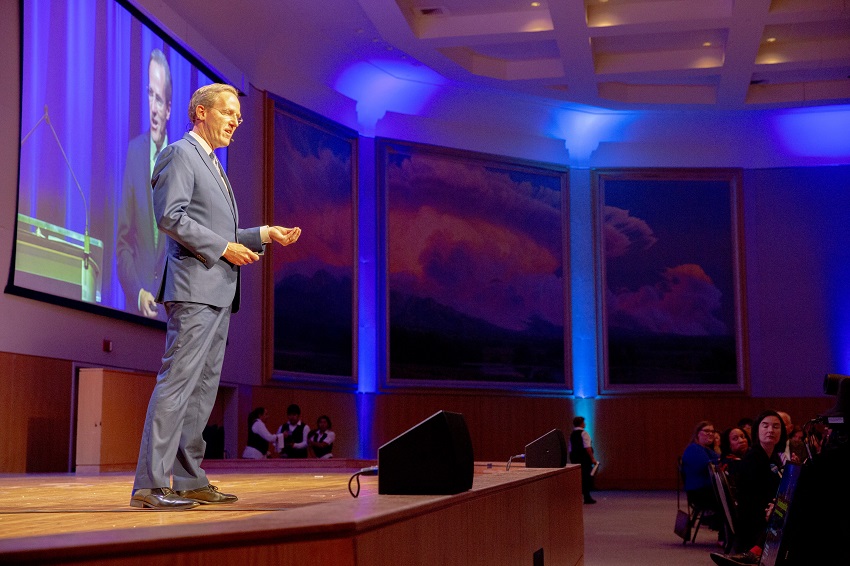 Nearly 600 Oklahoma City business leaders recently gathered at the National Cowboy Hall of Fame and Western Heritage Museum for the annual State of the Schools event. Attendees heard the latest on Oklahoma City Public Schools from Superintendent Dr. Sean McDaniel and other OKCPS leaders, followed by a keynote presentation from Wellington "Duke" Reiter, senior advisor to the president of Arizona State University and the executive director of the University City Exchange at ASU, spoke on the uncanny parallels between Oklahoma City and Phoenix.

“We are particularly interested in the city as a leading indicator of who we are, what we value, and how our desires are registered in built form,” Reiter said. “To my eye, cities and universities are not only comparable in their organization, I believe their fortunes are inextricably linked.”

Reiter said that Oklahoma City and Phoenix, though different in size, actually have far more in common than might meet the eye, including the fact that 20 percent of the population of both cities have baccalaureate degrees.

“You all understand educational attainment, what that means for the attraction of businesses and what that means for your economy is crucial,” he said. “It's also the case that we find ourselves side-by-side frequently. Our two states haven't maybe invested (in education) the way that we would like them to.”

Why is baccalaureate attainment important to the local economy?

“What this means to your population is capacity. Why would I locate my business here? You want to see people with those degrees, especially in the STEM fields that you're going to draw on if you're on one of those business,” Reiter said.

He also indicated that many administrative and clerical jobs are likely to be replaced or significantly altered by automation by artificial intelligence or by other things, while the jobs that require a bachelor's degree, master's degree or PhD, those things where their knowledge is generating those jobs will persist.

“Those are the jobs that you want in your economy. You want those others, too, but you want to see those people whose jobs are threatened gain the education that's going to make them successful and make you successful as a city and as a region,” he said.

“Cities and universities benefit from large, diverse and tightly packed populations which make them ideal settings to build unexpected relationships, exchange ideas and imagine possibilities. Design matters enormously in these settings. Well-orchestrated proximity in the city makes a streetscape walkable, vibrant and attractive. That same ingredient also causes two researchers to encounter each other on campus and generate an idea that neither would have developed independently.”

There's a great reason to attend a university. The conversations you have with your peers as a student, same for faculty, greatly enable that knowledge creation. So the campuses are critically important. However, if you're going to reach people, not all of them can make their way to the campus. But how do you get students, particularly in rural states like Oklahoma and Arizona to pursue their studies beyond high school? Why is that so important?

“In the state of Arizona, like in Oklahoma, we have many tribal nations and others who have never seen a university campus,” said Reiter. “How do we get to them if they're unable to come? So we're building one of the largest digital platforms in the country.

“We're offering a complete freshman year for example so, if you're anywhere on the globe, you can take a complete suite of freshman courses for free through our platform and then apply that to any university, including our own.”

Reiter said that the cost of a typical freshman year at Arizona State would be around $6500.

“But if you didn't have the means, we're trying to reduce the barriers to access and allow you to get an education even if you don't have any way to pay for that.”

But that doesn’t mean that traditional college campuses will start to disappear.

“If you can do this all remotely, do you really need that campus experience? Do you need all those expensive buildings? I'm going to suggest to you that the two of them in combination are absolutely crucial. One doesn't trump the other, you need both. Being on that campus, being with other people, is absolutely invaluable for those who can do that and the kind of knowledge creation that happens there is greatly advanced by proximity by the conversations that happen there.”

Reiter said that Arizona State’s innovative downtown Phoenix campus has been wildly successful in reaching students who might not be able to attend a “traditional” college campus and he feels that the same approach could work in Oklahoma City.

“The quality of what's going on at OSU and the University of Oklahoma and Central Oklahoma, could you combine forces to create something in Oklahoma City that was really about some of these other courses? What kind of programs could you bring to the city which are going to put students on the street in the best sense? What's the mutual benefit for the city and also for the respective universities?”