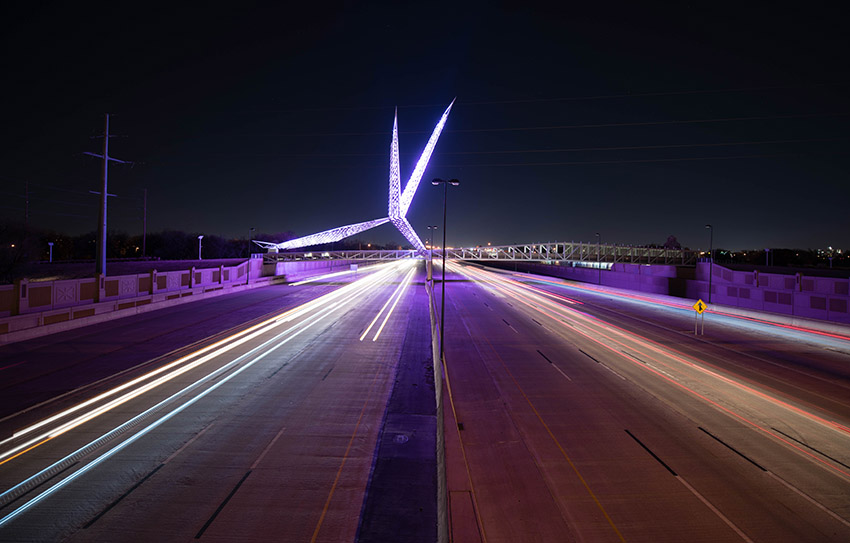 The Chamber is a long-standing supporter of maintaining adequate funding for the state's transportation system, an important driver of economic development. After experiencing significant funding cuts last year, the Oklahoma Department of Transportation (ODOT) delayed and removed projects from its 8-Year Construction Work Plan. Another round of such cuts would have proved devastating to the great strides ODOT has made in rebuilding the state's infrastructure over the past decade. Currently, there are a historic number of transportation projects under construction in central Oklahoma such as I-235/I-44; I-40/I-44 (Crossroads); and SH 77 that require steady, predictable funding.

The Chamber has always supported protecting Oklahoma's primary passenger rail asset - the Heartland Flyer - which experienced a twenty year discontinuation of service (1979-99). The Heartland Flyer, which connects Oklahoma City with Fort Worth, TX, is the centerpiece of Oklahoma City's efforts to provide more multi-modal opportunities for its citizens. The existence of Amtrak passenger rail service was the central reason why the Santa Fe Station was chosen as the $30 million City of OKC Intermodal Hub. This facility will serve as the cornerstone for a potential Regional Commuter Rail System. The Chamber is also highly supportive of opportunities to extend the Heartland Flyer north to Newton, KS, to connect Oklahoma City with Kansas City, St. Louis, Chicago and other destinations on the national system.

Legislation (SB 1239) was introduced by Senator Nathan Dahm (R-Broken Arrow) which would have entirely eliminated funding for The Heartland Flyer. The Chamber would like to express our appreciation to Senator Stephanie Bice (R-Oklahoma City), who did not hear this bill in the Senate Appropriations, General Government and Transportation Subcommittee by the first legislative deadline. Additionally, the final budget agreement included full funding for The Heartland Flyer.

The Chamber strongly supported passage of HB 3576 by Senator Adam Pugh (R-Edmond) and Representative Ryan Martinez (R-Edmond), which will allow Oklahoma to meet Federal Transit Administration (FTA) requirements through the creation of an "Oklahoma State Safety Oversight Program". HB 3576 further designates oversight of all private and public rail fixed guideway public transportation systems - including the Oklahoma City Streetcar - will be provided by the Oklahoma Department of Transportation.

Under Federal law, states failing to obtain state safety certification by April 15, 2018, would have been ineligible to receive FTA Federal public transportation funds. This would have resulted in the loss of millions in federal transit and rail funds for Oklahoma. The Chamber remains supportive of multi-modal transportation and ran the campaign for MAPS 3 (passed in December 2009) which included construction of a $131 million Oklahoma City Streetcar system connecting the core business district of Oklahoma City with Midtown and Bricktown. The streetcar is expected to begin service later this year.

HB 3576 overwhelmingly passed the Senate and House and was signed by Governor Fallin on April 12, in time to avert a loss of Federal transportation funding.

This article originally appeared in The Business Advocate, May 4, 2018