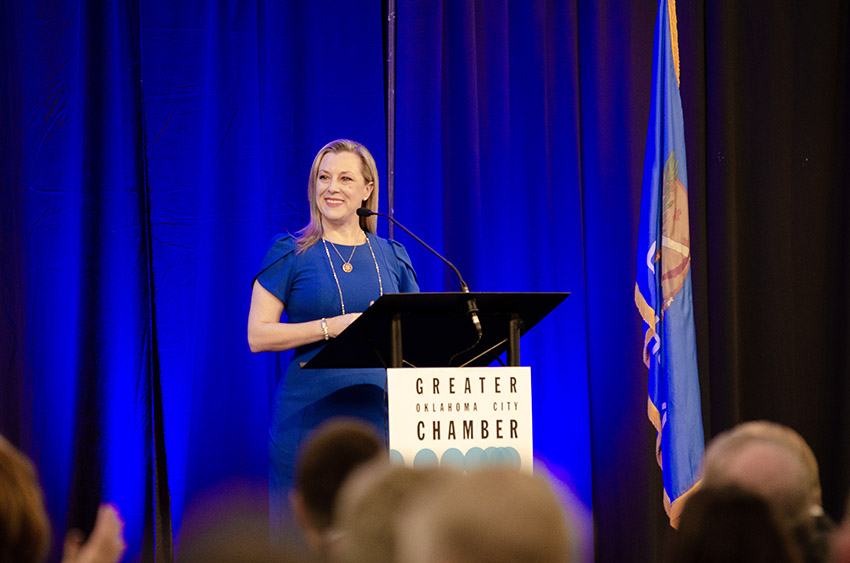 Congresswoman Kendra Horn wasted no time in commending the Greater Oklahoma City Chamber on its work in criminal justice reform.

"I think the Oklahoma City Chamber and all the of businesses and individuals involved are really a model for the nation," she said. "I was visiting with Chamber President Roy Williams and he said we're the only chamber in the nation tackling this critical issue."

She had to stop her opening comments as the Chairman's Breakfast audience applauded. She was the event's keynote speaker.

"(Criminal justice reform), like so many others that we face, is an issue that's not only a human issue; it's an economic issue," she said. "It's an issue that impacts our businesses, our community and our workforce, as well as the individuals that are in the system. It's an issue that if we choose to – and we have chosen to – we can tackle it and it will bring us together."

Horn said reforming the criminal justice system is one issue that can unite the political world rather than divide it and there are many other similar topics, such as education and healthcare.

She said the state has an amazing career tech system, but there needs to be more of push to get students in those programs because not everyone needs to go to college.

"There are many pathways to career opportunities," she said.

Since healthcare is also important to the state's communities, Horn said she has filed a bill, HR 4649, to cap out-of-pocket prescription drug costs to $2,000 for senior residents who depend on Medicare Part D. She said it's step-by-step changes like this that will help improve the nation's healthcare.

"The bottom line is that it's not an all-or-nothing solution," she said. "It's not about wiping the slate clean or throwing the baby out with the bathwater."

Horn is also addressing the lack of mental health care with her colleagues. She's working at a federal level to open the door wider for mental health, she said. Her latest effort was a bipartisan bill that expanded the grant opportunities for police and fire departments to get the training needed so they're able to recognize a mental health crisis.

"It matters because people who are mentally ill are exponentially more likely to be shot and killed by the police," she said. "If we don't provide people (like first responders) with tools to address the challenges they're facing, how do we expect them to do that job well?"

She encouraged the crowd to support MAPS 4 because it includes $40 million to help people facing mental health challenges.

"If we believe that Oklahoma City can be better and can attract businesses, then we have to have things that will draw people here from other places," she said. "The bottom line is what's good for our communities and where we can take a step forward is to recognize that there are opportunities to serve people and build our economic opportunities."

Other issues that Horn said she's working on is getting a U.S.-Canada-Mexico trade agreement passed. She also helped introduce a bill that will provide more resources for small business development centers through the Small Business Administration. In addition, she's trying to address the lack of banking in the medical marijuana industry. She co-sponsored the Secure And Federal Enforcement (SAFE) Banking Act, which passed the U.S. House in September. The bill is supported by the Oklahoma Bankers Association and Oklahoma Attorney General Mike Hunter.